There is no denying that Tesla’s electric cars are bound to be polarizing for a long time to come. Operating independent of gasoline, the vehicles are practically a stand against the fossil fuel industry. Being sleek, powerful and quick, the cars also go against the notion that electric cars are boring and slow. Unfortunately, as Teslas become more commonplace with the ramp of the Model 3, the vehicles appear to be attracting more resistance from the anti-EV community as well.

Last month, several members of the Tesla community went online to share their experiences with a practice colloquially known as “ICE-ing,” which involves gasoline and diesel powered vehicles blocking access to a Supercharger. While some of these incidents might be the result of an honest mistake, some ICE-ing incidents are undoubtedly intentional. Noted TSLA short Mark Spiegel, for example, has proudly shown off his Porsche Boxster S blocking a Supercharger stall earlier this year. Tesla owners u/Leicina and u/BarcodeOfficial from the r/TeslaMotors subreddit uploaded photos of stations being intentionally blocked by pickup truck drivers as well. As noted by the Tesla owners, some of the truck drivers were even verbally harassing EV owners. 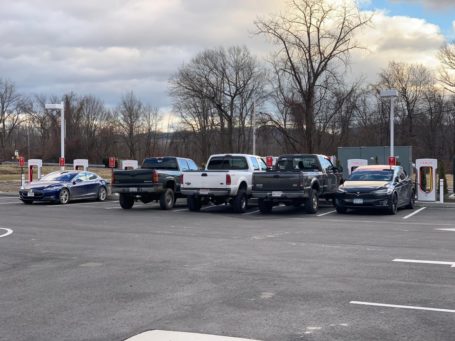 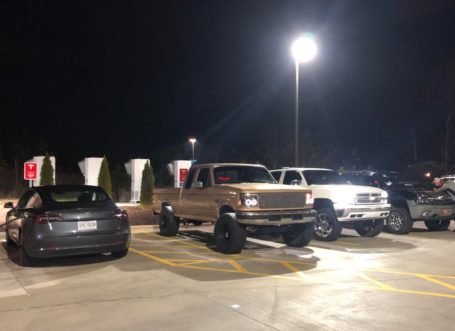 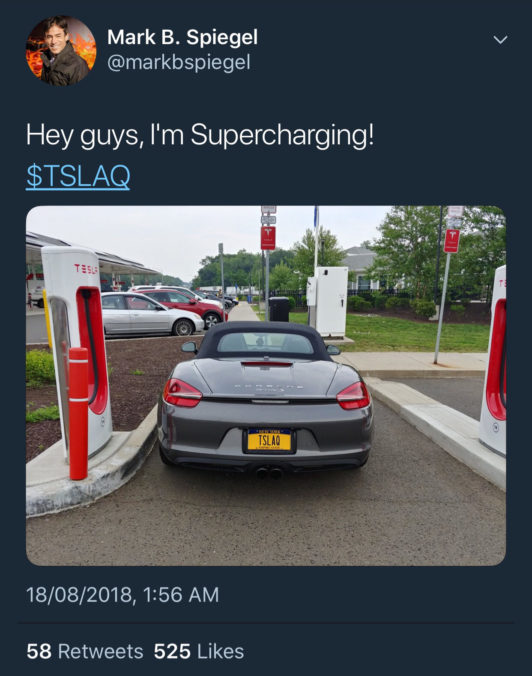 Amidst these annoying (and disturbing to a point) incidents, one thing that these pickup truck drivers could easily forget is that Tesla’s electric cars are actually loaded with a lot of power, and they have the weight to back it up. Being equipped with electric motors, Tesla’s vehicles have a lot of torque, and thanks to their massive battery packs, they are also very heavy. The Tesla Model X, for example, was at its lightest at 5,072 pounds, and that was when the company was still selling the 60D variant. Thus, in theory, a Tesla should be able to tow an offending vehicle out of a Supercharger station if needed, or as a last resort in the event of an emergency.

Such a theory was recently put to the test by Tesla Model X 90D owner Patrick Lawson. In a video posted on his Tesla Trip YouTube channel, Patrick opted to see if his all-electric SUV would be able to tow a full-sized pickup truck out of a Supercharger. Fortunately for the Model X owner, his sister recently acquired a 2014 Chevrolet 1500 Silverado, and she was more than willing to see if her 5,104-lb pickup could be towed by the electric vehicle. Patrick opted to conduct the experiment at an empty Supercharger in Loveland, CO, and to make the scenario even more challenging; he opted to engage the truck’s emergency brake, simulating a situation where a driver intentionally leaves a vehicle parked for an extended period of time.

In the video, Patrick could be seen hooking up his Model X to the Chevy Silverado 1500, then slowly driving away, pickup truck in tow. From what could be seen in the experiment, the entire ‘De-ICE-ing” process was effortless for the all-electric SUV, with Patrick noting in a conversation with Teslarati that he had to “show constraint” as he “gently pressed on the Model X’s accelerator” to ensure that both vehicles don’t get damaged. The Model X did not have to engage Slip Start before it towed the Silverado as well, and no warnings were present on the vehicle while it was pulling the full-sized pickup. Ultimately, Patrick noted that entire “De-ICE-ing” process only took around five minutes.

With the ramp of the Model 3, Tesla’s electric cars are becoming more prevalent. Unfortunately, acts like ICE-ing Superchargers would likely continue as well. And it’s not just ICE-ing either. Some Tesla owners, among them racecar driver Leilani Münter, have noted on Twitter that she had been “coal-rolled” multiple times while driving in her Tesla. In a tweet, Elon Musk described these situations as “bizarre.”

Inasmuch as ICE-ing, or coal-rolling for that matter, is an annoyance that could escalate into something more dangerous, there is very little that the anti-EV crowd can do to stop the spread of electric cars. Countries across the globe such as China, which are large markets for the auto industry, are shifting to electric vehicles, and so are regions like Europe. Thanks to cars like the Model 3, electric vehicles are becoming more and more attainable as well. Coupled with a grid that is shifting towards cleaner energy, it would only be a matter of time before the auto industry shifts completely to electric.

Watch Patrick Lawson’s video of his Tesla Model X “de-ICE-ing” a Supercharger below.