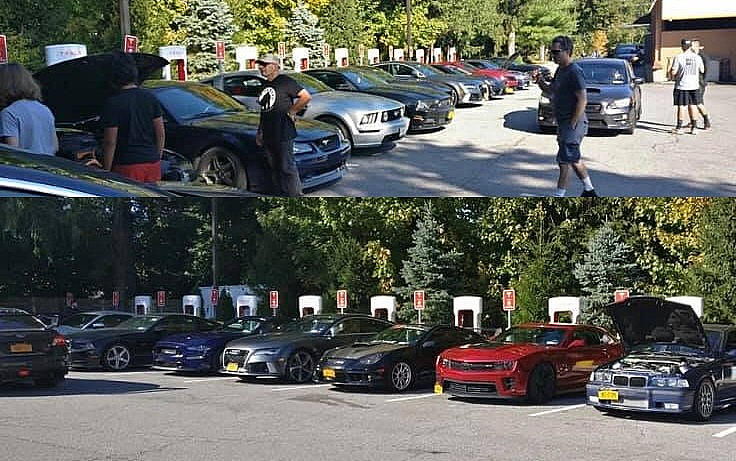 The organizers of Cars & Coffee Yorktown, NY have issued a pledge for change to Tesla owners after a recent meetup among its members resulted in a Supercharger getting mass-blocked by non-Tesla vehicles. The update comes as images made the rounds online depicting a multi-stall charging station being completely taken over by muscle cars and other high-performance vehicles.

Pictures taken of the meet were initially captured by EV community member TeslaReporter and shared with a Tesla-themed Facebook group. Amidst the sighs of disappointment among electric car owners regarding the mass ICE-ing incident, it eventually became evident that the organizer of the meet had actually issued a reminder to its members that the nearby Tesla Supercharger must not be blocked.

“PLEASE REMEMBER TO NOT BLOCK THE TESLA PARKING SPOTS. There are folks that need to charge their cars on a Sunday morning. You would not want the entrance to a gas station blocked. Please be considerate,” the organizers wrote on their reminder.

Yet, despite this request, it appeared that several attendees at this past Sunday’s Cars & Coffee Yorktown, NY meet opted to block the Tesla Supercharger anyway. Based on images shared online, it appeared that none of the stalls were left open for a Tesla to charge. This meant that a Tesla owner who needed to recharge a Model S, X, or 3 while the meet was ongoing would have had to search for the owner of one of the cars blocking the Supercharger and asking them to move. Such is an unnecessary inconvenience at best.

Fortunately, organizers of the Cars & Coffee meet were quick to state that they have been made aware of the incident and are now addressing the issue. While responding to a post showing the ICE-d charging stalls, the organizers pledged that they would work harder to emphasize to its members that it is not appropriate behavior to block access to Tesla Superchargers.

“(We’d) appreciate it if you could let them (the Tesla community) know we are addressing the issue… We will be sure to get the message out even louder to have Tesla charging spots available. I assure you it’s not intentional on our part. We will do our best to assure there are spots available for Teslas,” the organizers wrote in their response.

As electric cars become more and more mainstream, it is pertinent for drivers to become more and more familiar with appropriate etiquette with regards to electric car charging stations. As mentioned by the Cars & Coffee organizers in their initial reminder, Superchargers are the equivalent of a gas station for Teslas, and thus, it is not appropriate to intentionally block access to them. These simple habits will be key in the near future, particularly as electric cars become more mainstream with the rollout of mass-market vehicles like the Model 3 sedan and the upcoming Model Y crossover.