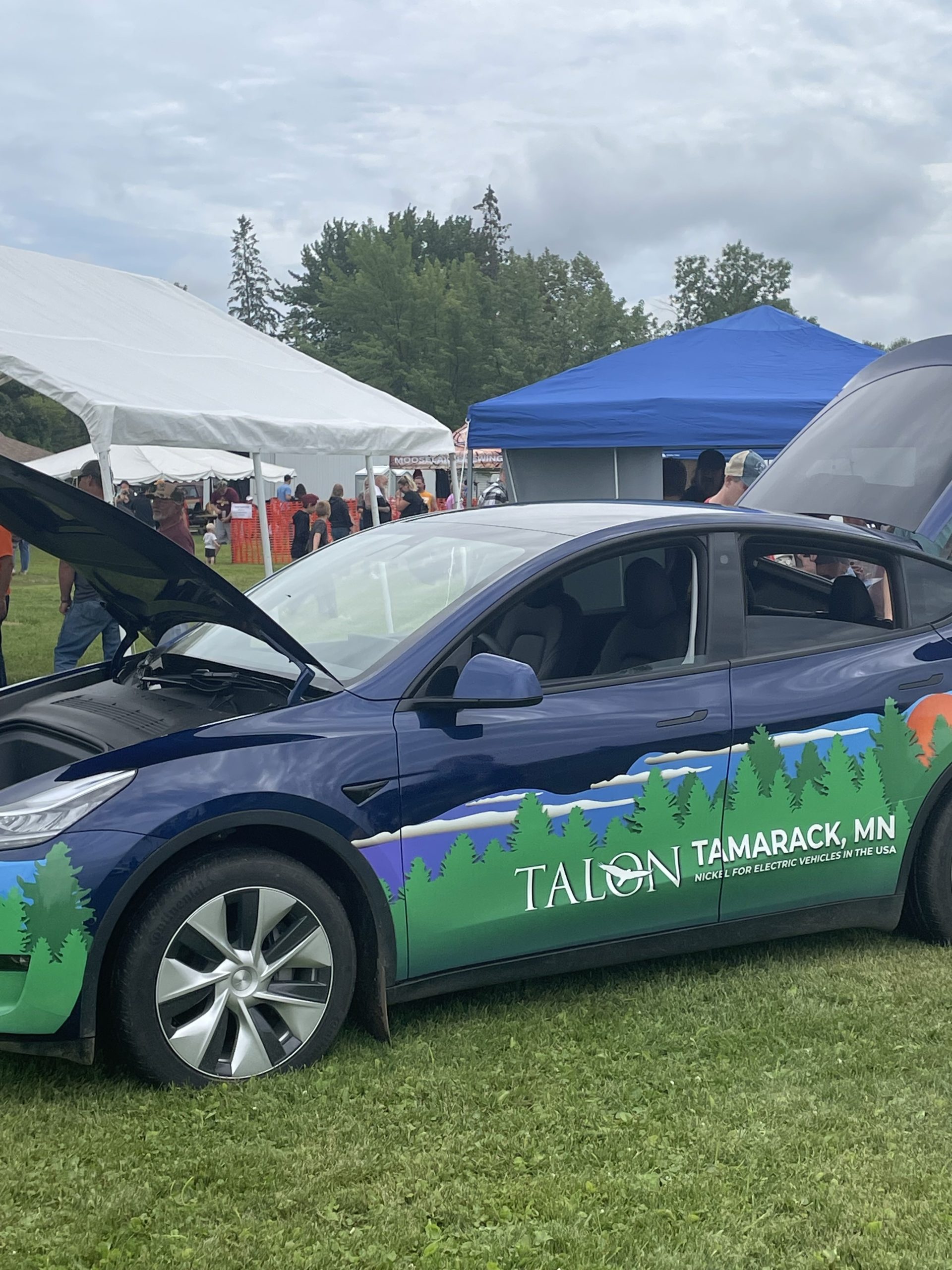 I received some great feedback on one of my recent articles from Todd Malan, Chief External
Affairs Officer & Head of Climate Strategy at Talon Metals, one of Tesla’s key suppliers of nickel
and other battery minerals in the USA.

The two companies signed an offtake partnership in January of this year to supply nickel from Talon’s project in central Minnesota.  Todd is based in Washington DC for Talon and therefore has a front-row seat to the wrangling among various parties regarding Senator Manchin’s new EV tax incentives in the Infrastructure Reduction Act of 2022.

As of this morning, voting was slated to begin today and the bill is expected to pass on a partisan line vote in the early morning of Monday. If the House passes it next week, it should be on President Biden’s desk by the end of the week.

Todd shared his thoughts on Manchin’s EV tax credit proposal. On one hand, it’s breathtakingly generous in that it lifts all numerical limits on EVs that are eligible for the $7500 tax credit.

Previously, 200,000 cars per year for each nameplate. On the other hand, Manchin’s proposal sets some new eligibility parameters around the cost of the EV, the income level of the buyer, and the source of the battery raw materials (sourced from the US or countries that have a Free Trade
Agreement with the US).

As I reported last week, some automakers are unhappy with Manchin’s strings on the EV credit, others like Tesla seem to be taking more of a “can do” approach when it comes to the mineral content provisions.

Todd also walked me through the comprehensive approach that Senator Manchin took to
supporting domestic mining and mineral processing across the full bill.

The fact that he got commitments from Democratic leaders in Congress and President Biden to reform the permitting process in the US in separate legislation (not just for mines but for solar, wind and hydrogen too) is another signal of Manchin’s holistic approach to ramping up the full battery supply chain in the US and also rely on allies that happen to be mineral powerhouses like Australia and Canada.

Todd had a very optimistic view that all of these provisions, including the EV credit, will help the U.S. address its dependency on China for batteries and scale up its capability in battery mineral production.

The core of his view is that it will take partnerships between miners, automakers,
regulators, recyclers, and other parts of the supply chain to meet the Manchin content
requirements.

Todd thinks Tesla and Ford stand out as companies leading the way in this new
approach to supply chain security.

Todd read my article, Automakers are not too happy with Senator Manchin’s EV tax credit
proposal and pointed out that there was not a universal view among the automakers or the rest of the battery supply chain.

“Mazda and Rivian have been out-front in the media complaining about aspects of Senator
Manchin’s EV incentive proposal. I understand the concern that the timeline is very ambitious but on the other hand, Senator Manchin’s draft includes some of the world’s largest producers of battery materials: Canada, Chile, Australia, South Korea, etc.”

“This is a balanced measure that will encourage domestic mining investment and development while also ensuring we can draw on our allies for secure supplies. It may not be the cheapest option for the automakers, but supply from this broad base of countries can be ramped up to meet the requirements.”

Todd pointed out that other parts of the auto lobby had a more nuanced approach to
Manchin’s proposal to support EV adoption. The Zero Emissions Transportation Association (ZETA), in which Tesla is a lead member, was quick to offer support for Manchin’s EV incentives.

Joe Britton, ZETA Executive Director was quoted in a number of media articles admitting that the domestic and ally content provisions would be hard to meet but that they could be met.

“If you look at the landscape as it exists today, it’s a challenge, but it’s doable,” said Joe Britton, the head of the Zero Emission Transportation Association, which advocates for EV adoption, told Bloomberg.“We can meet these metrics.”

Britton also has been praising the Manchin bill for what it will do for EV adoption. He told
News12 Westchester that he hopes the rebate can entice more people to purchase EVs. Britton said:

“In most areas of the country, especially the Northeast, it is five to six times more expensive to drive your vehicle on gasoline than it is by electricity. So, by making these vehicles more affordable on the front end, you’re really driving down that total cost of ownership”

As with most people that are involved with Tesla as suppliers, Malan was extremely careful to not speak for Tesla or speculate on their positions. But I realized that someone glancing at the headlines without reading through the article might assume that Tesla was of the same view as the legacy auto industry.

We all know Tesla prefers to speak for itself and Elon Musk shared a thought about Senator Manchin on Twitter yesterday. Although many were wondering what his tweet meant, I think it’s pretty clear he thinks Manchin is doing something right.

Partnerships across the value chain will be key

Todd pointed out to the Detroit News yesterday that it will take a range of
partnerships to meet the Manchin goals. He pointed out that Tesla and Talon have explicitly described their supply relationship as a partnership. Tesla is working with its suppliers.

Todd told me that everyone will need to work together to meet these goals.

“We need everyone working together to meet these ambitious goals in the Manchin bill.
Mining is the front end of the supply chain and it takes enormous knowhow, capital, and risk tolerance to discover, delineate, permit, construct and then safely operate a mine to supply battery minerals.”

“Processing has been the Achilles heel of the supply chain in the U.S. Luckily. Congress just provided new resources to address this issue in the bipartisan infrastructure bill. Everybody’s going to have to work together. The auto manufacturers, the miners, the people that do processing, and government at state and federal level.”

“Senator Manchin and others in Congress realize that governments are going to have to focus on improving the permitting process – not to cut corners in environmental protections but to make the process more certain, efficient, and reliable.”

“Not just for mines, processing or even EV battery factories – but also solar, wind, hydro and hydrogen projects. We can not afford a disorganized, uncoordinated, and inefficient regulatory process that causes unnecessary delays in progress. We need all these projects to come online to address the climate crisis while also ensuring we protect the environment through science-based permitting.”

I’ve seen a lot of mixed feedback on Senator Manchin’s proposal. As noted in my earlier article, many automakers like Mazda and Rivian are lobbying hard to water it down. Not as much has been heard from the companies that source raw materials like nickel and lithium in the United States. So, I asked Todd to share his take–and that of Talon Metals.

“From the standpoint of a company that’s trying to build a responsible nickel mine in
Minnesota, we think that Senator Manchin has struck a good balance in this bill. First, it provides the most generous set of incentives for EV adoption ever enacted in law.

“It also encourages auto companies to work with domestic mines and mines in allied countries like Australia, Canada, and Chile and it provides some time for projects to ramp up. It also provides time for countries that don’t have FTAs to engage with the US and negotiate. Yes, it is a stretch goal but that seems appropriate given the climate crisis and our dependency on countries like China and Russia for battery supplies.”

“This is a carefully balanced bill that does push everyone to rise to the occasion. But that is appropriate because we want to create high-quality jobs in America as part of the energy transition and we don’t want to rely on Russia and China for the supply chain of battery minerals. It’s a matter of national security.”

How can automakers better work with their suppliers?

I asked this question because if automakers truly want to “get aggressive”; as Senator Manchin challenged them to do, then perhaps they need to take a page from Tesla and other leaders’practices.

“Having a Tesla off-take agreement in place has changed the perception of our project in the community. It’s very credentializing and our employees are proud of the partnership. People clearly understand that our proposed mine has a purpose: to supply nickel for the EV battery supply chain and contribute to the energy transition. This has helped shape how people perceive the project. It has a purpose and an important one.”

“Many of the large automakers are helping supply partners apply for some of the significant new funding opportunities being made available through the Bipartisan Infrastructure Bill. The Department of Energy is expected to give out over $1.8 billion in funding from that legislation this fall. This is another example of how the end-users can help the front end of the supply chain for battery materials.”

Todd commented that many auto companies are having a tough time adjusting to the new
reality of scarce commodities.

“They used to only focus on price and quality with a yearly focus on driving down the price. It’s a whole new game now, as they learned in the chip crisis. Some are still adjusting their mindset to scarcity and competition for supply.”

“It requires a change in mindset. No longer can the big auto company demand ever-lower price year over year. Smart end users have changed their mindset to partnership. That means understanding their partners’ issues, helping them to maximize productivity, access newtechnology, ramp up production, improve quality, and provide support during the permittingprocess or help obtain government funding.”

“This is the future, true partnership in the supply chain, from mine to cathode to recycling. That is how we meet Senator Manchin’s challenge and strengthen the supply chain for battery production.”

Todd didn’t come out and say it directly, but it came through in the way he talked about the Tesla. Yet again, Tesla is leading the industry in terms of securing supply from the right countries to feed its factories but also leading practices in working in partnership with key suppliers.

Knowing that I love cool rocks, Todd invited me up to Minnesota to check out what Talon is doing at Tamarack and show me some beautiful nickel samples. Todd also told me about Minnesota’s famous burger concoction, The Juicy Lucy.