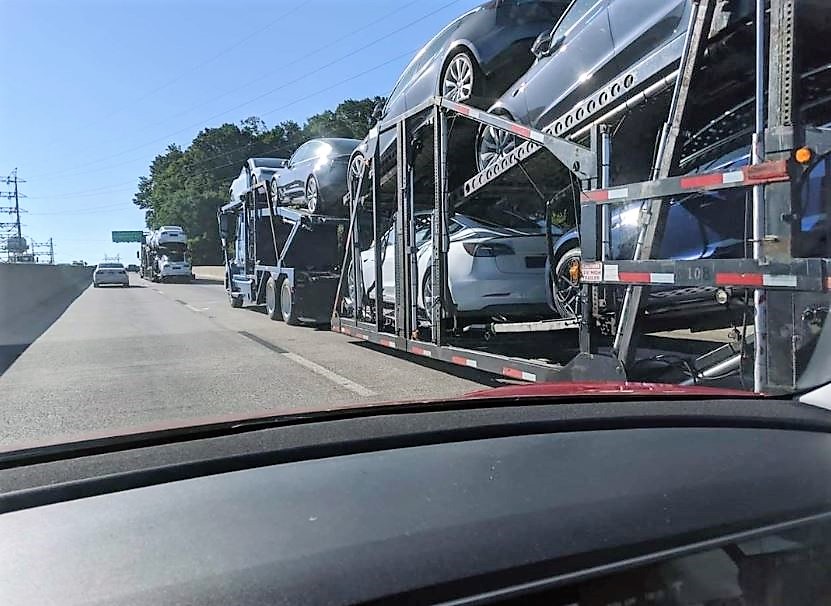 Several semi-truck loads of Tesla Model 3 right-hand-drive (RHD) vehicles are on their way from the company’s headquarters in California to the Port of Philadelphia for transit to UK customers. This alternative route of travel will reportedly provide quicker delivery times than the usual path that takes the all-electric cars around the western part of the country via the Port of San Francisco and through the Panama Canal. Tesla’s strategy could help increase its Q2 2019 delivery numbers and possibly provide cost savings from the shorter delivery distances traveled.

The quicker transit looks to save about two weeks from Tesla’s shipping time, as detailed in a report published by XAutoWorld. The usual San Francisco to the Port of Zeebrugge (Belgium) route is around 10,600 nautical miles with an average shipping time of 24 days, depending on a few variables. The distance from Philadelphia to Zeebrugge is about 4,000 nautical miles with a travel time of around 10 days.

A large number of @Tesla #Model3 vehicles is reportedly being moved from the #TeslaHQ in Palo Alto, CA to #PhilaPort to ensure faster delivery times for Europe & the UK…" → https://t.co/Xpd8yVidvP

Similar efforts by the community to track Model 3 shipments to the UK came in June when the first truckloads carrying the RHD midsize sedans in London, and later confirmed by text messages from Tesla’s customer service to new owners awaiting delivery.

It’s not uncommon for Tesla enthusiasts to track cargo ships with regard to deliveries around the world. The first batch of Model 3 vehicles to arrive in China came on the carrier ship Glovis Symphony in February, and the first European deliveries came aboard the ship Glovis Captain. Enthusiasm for such shipments is more than just the excitement from customers awaiting the arrival of a product they ordered; the shipments themselves mark Tesla’s success around the world, which in itself is a marker of success towards its overall sustainable energy mission.