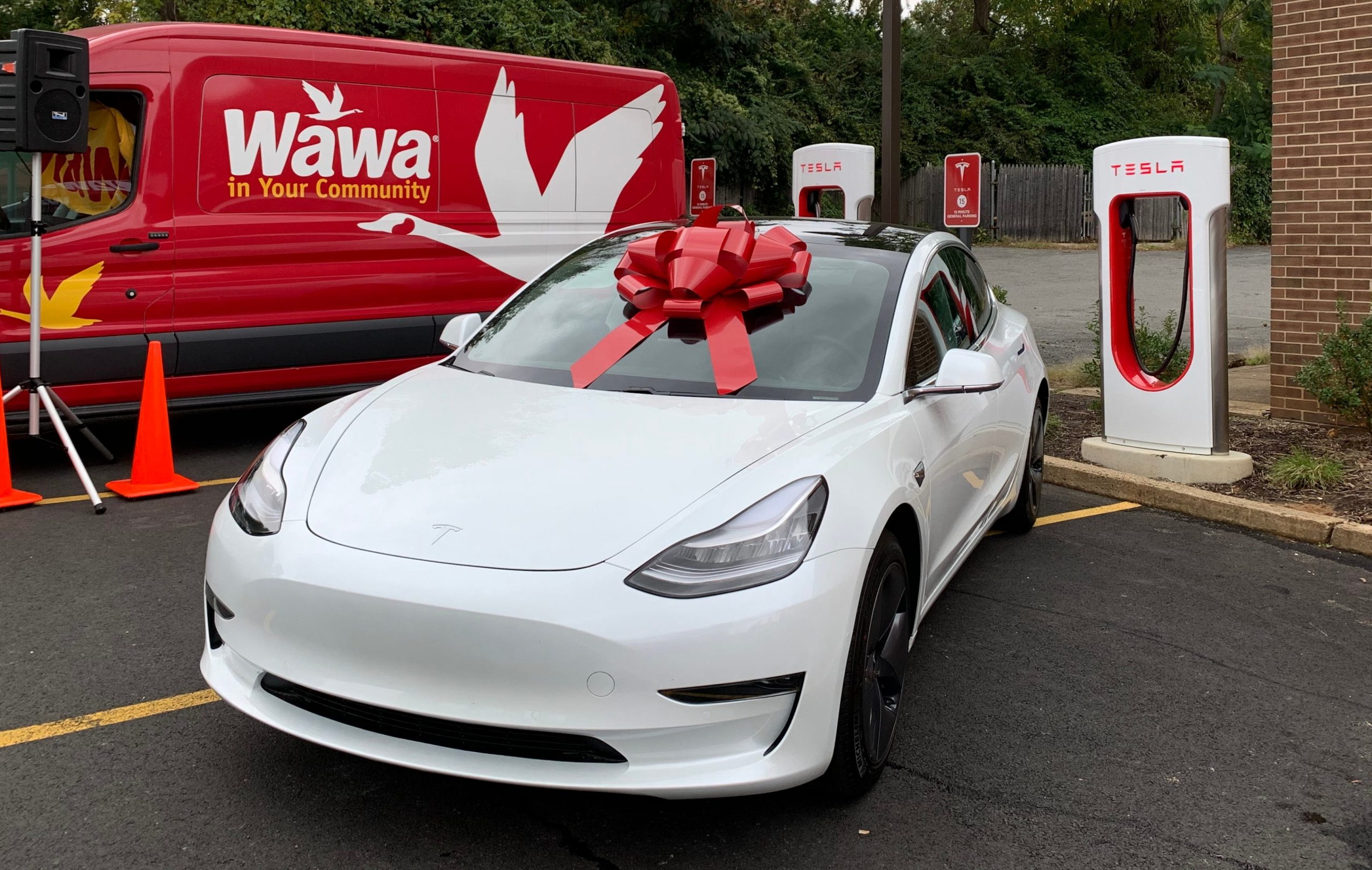 Wawa is giving away a Tesla Model 3 to celebrate its 500,000th EV customer

American convenience store and gas station chain Wawa is celebrating electric vehicles and sustainable transport in a rather interesting way, with the company launching a Tesla Model 3 sweepstakes for its Virginia-based customers. The initiative, which was officially announced at Wawa’s new Vienna, VA location, is part of National Drive Electric Week.

As noted by Wawa, the Model 3 giveaway is being held in honor of the 500,000th electric vehicle customer that the company has served across its locations in the United States. The launch of the sweepstakes was quite notable, with the event featuring a white Tesla Model 3 with a bow on its windshield and a ceremonial “plugging in” of the vehicle at a Supercharger, officially celebrating the half-million EV charging mark.

The winner of Wawa’s Tesla Model 3 giveaway will be receiving a three-year lease for the all-electric sedan.

It should be noted that Wawa has been offering electric vehicle charging services since 2017, with the company putting up both Tesla Superchargers and third-party EV chargers in several of its sites. In Virginia alone, Tesla Superchargers are available in Wawa locations at 10060 Jefferson Davis Highway in Fredericksburg and 11701 Jefferson Davis Highway in Chester. Another Wawa site at 5231 Brook Road in Richmond features EVgo CCS and CHAdeMO chargers.

The official announcement of the Model 3 sweepstakes at the Vienna outlet is quite fitting, seeing as it is the first Wawa location that exclusively features electric vehicle charging services. This is a notable step for the company, seeing as gas stations comprise a significant part of Wawa’s operations. This was highlighted by Brian Schaller, chief real estate and fuel officer at Wawa, in a statement.

“Wawa proudly hosts 33 electric charging stations to date – with a goal of reaching 40 by year-end, across our entire operating area, with the purpose of providing ‘boundless convenience,’ for friends and neighbors seeking access to food, beverages and charging stations at one destination. We selected our Vienna, VA store as a backdrop to announce this sweepstakes as it’s the first store in company history to open with EV chargers only, no fuel pumps, which demonstrates our commitment to innovation, sustainability and our continued desire to meet the needs of our customers,” Schaller said.

Wawa’s Tesla Model 3 sweepstakes is set to run from September 29 through October 26, 2020. The winner of the sweepstakes will be participating in a live presentation of the Model 3 as well as an EV parade at Wawa’s Vienna, Virginia location.

Wawa is giving away a Tesla Model 3 to celebrate its 500,000th EV customer