Space architecture startup AI SpaceFactory achieved second place in the latest phase of a NASA-led competition, pitting several groups against each other in pursuit of designing a 3D-printed Mars habitat and physically demonstrating some of the technologies needed to build them.

With a focus on ease of scalable 3D-printing and inhabitants’ quality of life, as well as the use of modular imported goods like windows and airlocks, MARSHA lends itself impeccably well to SpaceX’s goal of developing a sustainable human presence on Mars as quickly, safely, and affordably as possible with the support of its Starship/Super Heavy launch vehicle.

Aside from developing a custom 3D-printing material utilizing in-situ Martian resources and demonstrating the technology by successfully printing a 1200 gallon (4500 L) water tank, SpaceFactory’s habitat design – known as MARSHA – combines a unique level of pragmatism, functionality, and aesthetic elegance. After analyzing different structural options, the SpaceFactory team settled on a cocoon-like cylinder, taking advantage of the many benefits of the Martian environment while controlling for its several downsides. Most notably, Martian gravity is roughly 38% of Earth’s, while the small planet’s atmosphere is typically 80-150 times less dense at surface-level. As a consequence, the forces exerted by Martian winds are minuscule and can effectively be ignored, while the low gravity dramatically minimizes architectural challenges that arise from Earthbound structures having to battle their own weight.

Equally important, all Martian habitats will need to be pressurized to a level comfortable for long-term colonists, requiring that they be able to survive significant internal pressurization. The Martian radiation environment is also significantly less forgiving than Earth, although the dangers of Martian radiation are dramatically overblown. The material of choice SpaceFactory designed to 3D-print its MARSHA habitat – a biorenewable plastic (PLA) reinforced with locally-sourced basalt fiber – also accounts for many of Mars’ shortcomings, as plastics happen to be some of the best materials for radiation shielding per unit of mass. Featuring a duo of PLA shells placing a meter or more of plastic between living areas, MARSHA would permit relatively acceptable radiation levels while avoiding the downsides of locating habitats underground or burying them under several meters of Martian regolith.

An overview of a potential Mars base built around the MARSHA habitat design. (AI SpaceFactory & PLOMP) 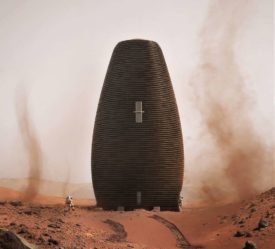 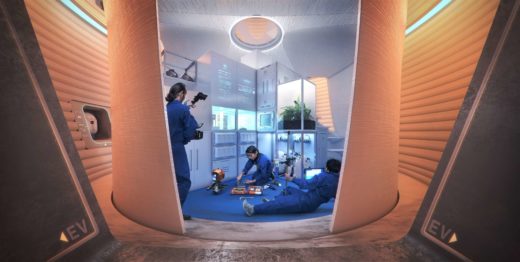 A glimpse into one floor of MARSHA’s Mars habitat interior. (AI SpaceFactory & PLOMP) 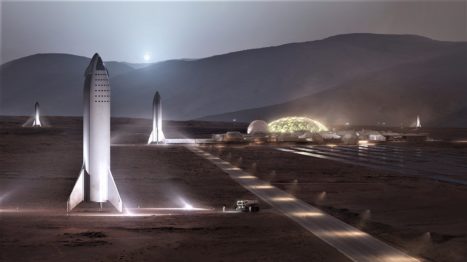 A number of BFR (2018) spaceships seen landed at a future Mars base. (SpaceX)

Thanks to its cylindrical design and SpaceFactory’s attention to quality of life for astronauts residing within it, MARSHA is also exceptionally beautiful and more than a little alluring even from the perspective of Earthly habitation. MARSHA’s thoughtful design and polished aesthetic would likely mesh well with SpaceX CEO Elon Musk’s own established preferences, known (sometimes infamously so) for a predilection towards building things that value form at least as much as function. Due to the relatively compact nature of the hardware needed (in theory) to begin building MARSHA and the apparent potential for autonomous construction, SpaceFactory’s design also aligns with a number of critical aspects of SpaceX’s outlined Mars colonization architecture.

AI SpaceFactory’s alluring vision of one route to humans living on Mars. 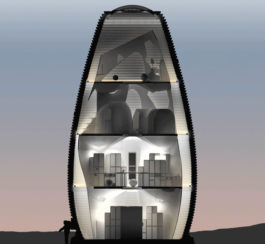 A cutaway view of MARSHA at Martian dusk. (AI SpaceFactory) 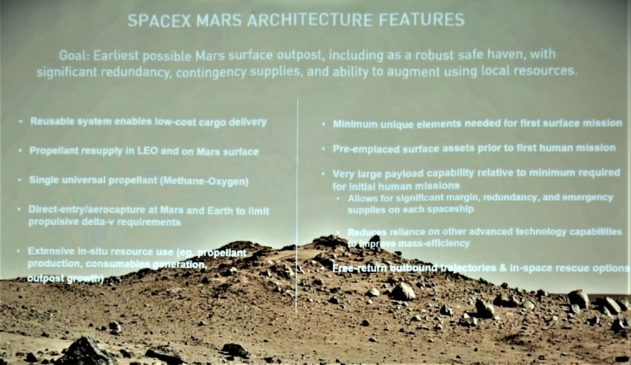 An outline of the main features of SpaceX’s “Mars Architecture”, present by Paul Wooster in August 2018. (SpaceX) 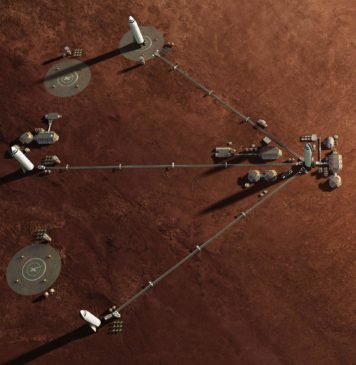 An overview of an early SpaceX Mars colony, circa 2017. (SpaceX)

Up next for NASA’s 3D-printed habitat competition is “Phase 3”, effectively a grand finale: up to eight finalists are expected to compete to 3D-print a 1/3rd scale model of their Mars habitat design as early as May 2019. While not confirmed, it’s likely that SpaceFactory will be among those finalists, potentially helping to offer an early glimpse at what rapidly-printed Mars habitats might look like in real life. SpaceX CEO Elon Musk has also indicated that he would provide a more substantial update on the status of BFR (Starship/Super Heavy) and SpaceX’s Mars architecture soon after the company’s first Starship prototype – unofficially known as Starhopper – begins test flights. That milestone is like no fewer than 1-2 months away.