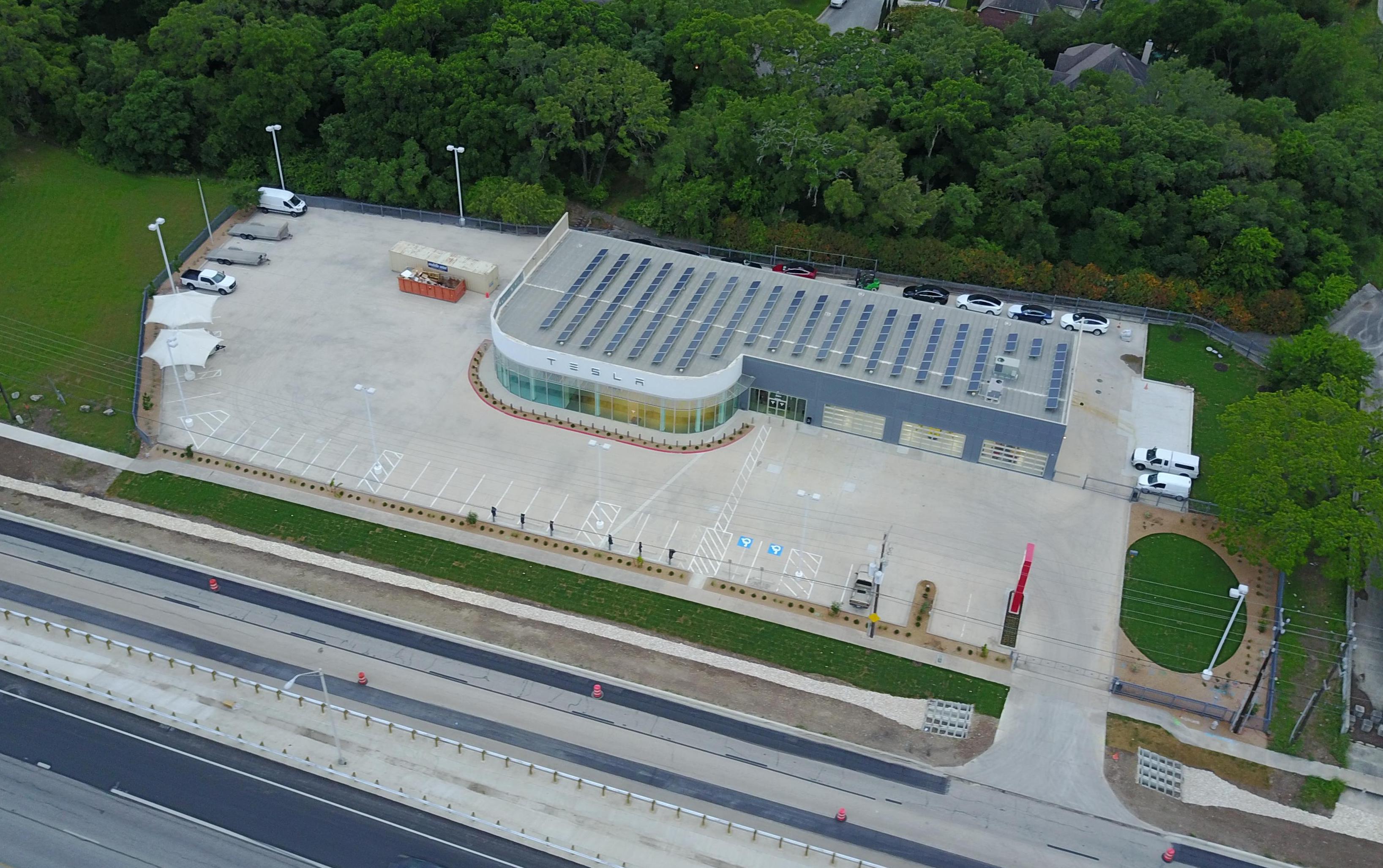 A  new drone picture of the Tesla’s upcoming San Antonio Service Center reveal a beautiful array of solar panels covering the rooftop. The service center which the company has listed as “Coming soon” on its website will join four other locations in Texas that have vehicle servicing capabilities.

Updated: A new 4K drone video embedded at the end of the article gets a close up look at the front and interior section of the San Antonio Tesla Gallery and Service Center.

The battle for Tesla in Texas continues to be long and drawn out. Tesla has been battling the local dealer franchise association over its right to sell vehicles direct to consumers. The Silicon Valley-based electric carmaker first attempted a brute force initiative by increasing its lobbying team in 2015 but saw little success after the Texas State Legislature failed to vote on two separate bills that would have allowed the electric car company to sell its cars directly to customers. Tesla eventually changed tactics and pushed for a bill that would allow any auto manufacturer and not just Tesla to sell directly to consumers, which began to find some traction.

After a third attempt at securing a permit for the San Antonio location late last year, Tesla was finally able to get things moving and the new location is now a beautiful example of what a solar powered Tesla Service Center should look like.

Tesla has shared goals of powering its Supercharger network and massive Gigafactory facility with renewables, but has been slow on the actual procurement and installation of these resources which has drawn some criticism from the public. The obvious pushback is that renewables largely require massive up-front capital investments that come with long payout times. Investing heavily in renewables today would increase financial burden at a time when Tesla is laser-focused on investing into Gigafactory expansion, Model 3 production ramp and future development of Model Y, the “seriously next level” Tesla Semi, and Tesla’s upcoming pickup.

However, since Tesla’s acquisition of SolarCity  last year, the company has secured access to resources and operational processes that will allow the company to embark on large scale solar projects. Seeing solar panels on the roof of the San Antonio Service Center makes a lot of sense. It is not only a smart move financially but it also serves as advertising for one of Tesla’s products. The company recently announced a new line of sleek and low-profile solar panels.

The new 12,000 square-foot Tesla Service Center is located at 23011 W Interstate 10, just north of the 1604 interchange and across from The Dominion Community. The drone shot does not reveal Supercharger stations on site though the Tesla map of 2017 Superchargers shows one in the greater San Antonio area.