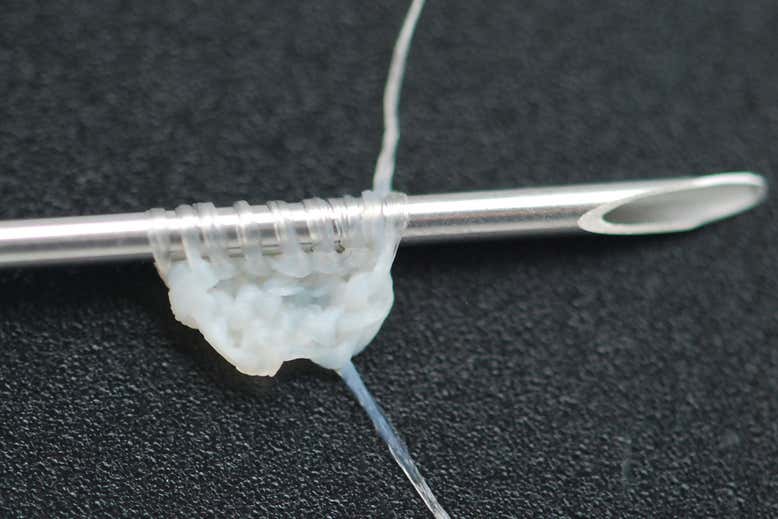 Scientists explore yarn made from human tissue for wound repair

A group of researchers from the French National Institute of Health and Medical Research in Bordeaux have produced what they call a “human textile” that could be used for repairing wounds. By growing yarn from human skin cells, scientists are exploring ways to improve the process for skin grafting and organ repair.

This story may sound like something out of the Netflix series “Black Mirror”, but it’s a promising new medical technique that could help a lot of patients.

“This material can be used as a simple suture to close a wound or can be assembled into fully biological, human tissue,” the researchers explained in their paper, which was published in the journal Acta Biomaterialia.

According to the team, the yarn could be superior to current materials since it will not only be used in a number of medical procedures, but will be able to truly integrate into the patient’s body. The string-like substance can be knitted, crocheted, and sewed to create things like pouches, valves and tubes, and even perforated membranes.

“This novel strategy holds the promise of a next generation of medical textiles that will be mechanically strong without any foreign scaffolding,” they explained in the paper. According to the research team, this is a huge plus as the human body can often reject scaffolding and other materials as a foreign object.

“Most permanent synthetic biomaterials are recognized as foreign by the innate immune system, which leads to the well-described ‘foreign body reaction’ upon implantation,” they wrote.

These types of immune system responses can complicate the healing process.

“These human textiles offer a unique level of biocompatibility and represent a new generation of completely biological tissue-engineered products,” they said.

So how did they create this weird, futuristic yarn? First, the researchers cut sheets of human skin cells into long strips and then “wove” them into a yarn-like material that can be fabricated into a variety of shapes.

To date, the researchers have stitched up a rat’s wounds; it healed fully over the course of two weeks. The team has also successfully created a skin graft — with the help of a custom-designed loom — to stop a sheep’s artery from leaking.

The team was previously successful at creating artificial blood vessels made from rolled-up sheets of biomaterial. This research builds on that success.

Scientists explore yarn made from human tissue for wound repair