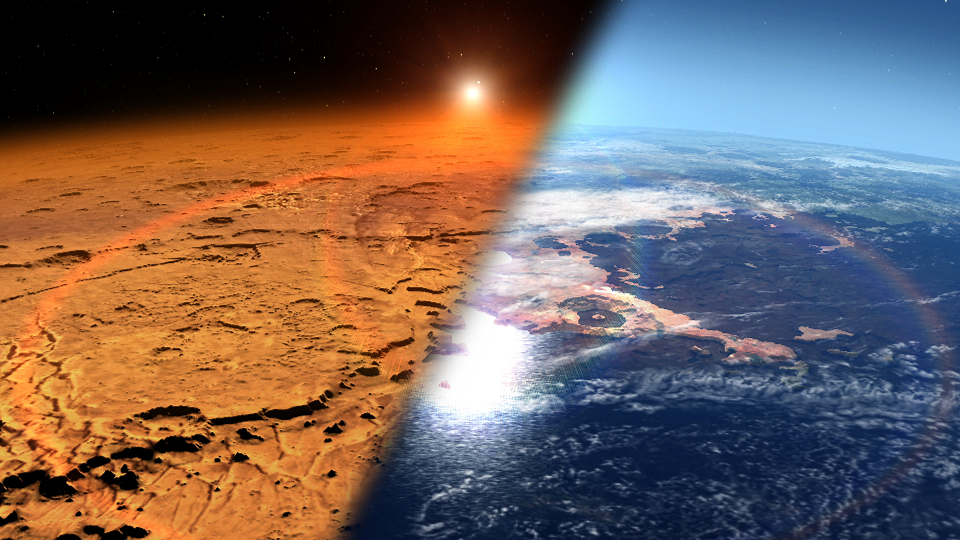 Aurorae are a dazzling light spectacle often visible at high-latitude locations here on Earth. They’re colorful and mesmerizing, but most of all, they’re mysterious.

A new study has found that this same phenomenon also happens on Mars. In research presented last week at the American Geophysical Union’s annual Fall meeting, scientists revealed that the most common form of Martian aurorae is called the proton aurora.

Just like the auroras we see here on Earth, proton aurorae are formed when the solar wind—a stream of charged particles emanating from the Sun—interacts with the atmosphere. That interaction often manifests itself as a mesmerizing swirl of colored lights in the night sky.

On Mars, however, the auroras appear during the daytime and onlookers would need special ultraviolet glasses to see them. That’s because they’re invisible to the naked eye, but can be spotted with special UV instruments.

These auroras aren’t just a future Martian tourist attraction, they have a scientific value. We could better understand how Mars is losing water to space and more about how the planet’s climate is changing.

Proton auroras were first discovered in 2016 by NASA’s Mars Atmosphere and Volatile Evolution (MAVEN) spacecraft. MAVEN is investigating how the Red Planet lost its atmosphere and water, ultimately transforming its climate from one that may have supported life to one that is inhospitable.

The observed aurora can help researchers track the amount of water lost since the auroras are related to water loss.

“In this new study using MAVEN/IUVS data from multiple Mars years, the team has found that periods of increased atmospheric escape correspond with increases in proton aurora occurrence and intensity,” Andréa Hughes of Embry-Riddle Aeronautical University in Daytona Beach, Florida said in a news release.

Auroras on both planets start with the same source: the solar wind. On Earth, they appear when the solar wind slams into our planet’s magnetic field. High-energy collisions occur as the charged solar particles interact with particles of atmospheric gas. Each type of particle produces a different colored light in the sky.

Martian auroras start in much the same way, charged particles from the solar wind collide with a cloud of hydrogen that surrounds the red planet. When this happens, protons in the solar wind become neutral after stealing electrons from the hydrogen atoms. They then collide with other molecules in the Martian atmosphere, producing an ultraviolet glow.

Since the hydrogen cloud surrounding the planet is created in part by water being lost to space, this could give scientists a way to measure the amount of water lost over time.

When the MAVEN team first observed the proton aurora, they thought they were witnessing an unusual phenomenon. “At first, we believed that these events were rather rare because we weren’t looking at the right times and places,” Mike Chaffin, a research scientist at the University of Colorado Boulder’s Laboratory for Atmospheric and Space Physics (LASP) said in a statement.

After Chaffin’s team took a closer look, they discovered that the proton auroras occur quite frequently, especially in the summer. This is probably due to seasonal variation in the hydrogen cloud that surrounds Mars. The team noted that during the Martian summer, the cloud lines up just right to produce near-constant auroras.

But that’s not all. The researchers also discovered that as temperatures climb during the summer, rising dust clouds would carry water vapor away from the planet’s surface. That water vapor is then broken down into its components: hydrogen and oxygen. As more hydrogen escapes into space, it enhances the hydrogen cloud enveloping Mars and ultimately leads to more frequent (and brighter) proton auroras.

“Observations of proton auroras at Mars provides a unique perspective of hydrogen and, therefore, water loss from the planet,” physicist Edwin Mierkiewicz of Embry-Riddle Aeronautical University in Florida said in a statement.

“Through this research, we can gain a deeper understanding of the Sun’s interactions with the upper atmosphere of Mars and with similar bodies in our Solar System, or in another solar system, that lacks a global magnetic field.”

So, if we ever do make it to Mars, those first visitors are going to witness some truly out-of-this-world sights—as long as they packed their ultraviolet goggles.