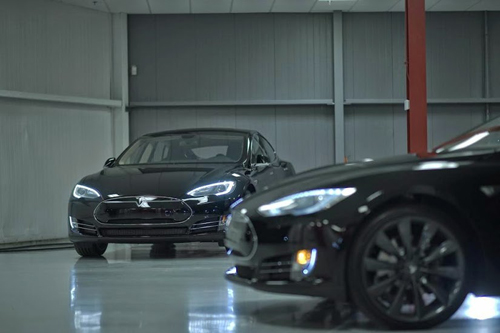 Living in the Chicago area is a great place to be for electric vehicles, smack dab in the middle of the country and access to a major international city for interesting EV events and startups. There is Argonne National Lab, many Tesla Motors stores in the area and pretty decent charging infrastructure.

Earlier this year, we documented Chicago-based Gino Bernardi and his Model S Limousine service company, wattsonwheels.com. It was a great interview on how he started this company and some of his electric adventures in the Chicago area.

Another Chicago-based Tesla limo service, called e-Motion Chicago, chauffeurs professionals and other business clientele around the city, and offers something I’ve never seen before: a convoy service.

The site describes this convoy service “for that very special occasion, you can appoint up to four Teslas equipped with our highly trained drivers.”

Here’s an example of Lelani Munter, electric vehicle proponent, arriving at a sporting event via e-Motion.

On the charging front, Chicago had more good new regarding older DC fast charging infrastructure done by the dubious outfit known as 350 Green in early 2011 or so. These stations, located on highway oasis(es) and parking garages, were inoperable (due to proprietary software) for more two years due to some shady business practices.

However, NRG eVgo and JNS are partnering to relaunch these charging stations. Some of these stations have theChAdeMO connector, but, as seen on this site, there are Model S adapters and possibly could be used by these companies.

In other news Tesla taxi news, a new beta program is being started in London called Gliide. A recent release stated, "...for the moment, at least, GLiiDE is invite only, which is basically a closed beta to work out the kinks. If/when it opens up to the public as a whole though, this slick company could have people lining up just for a ride around town. A similar idea has launched in nearby Kent, and a few taxi services in the US and Norway are giving the Model S and other EVs a shot at livery work.

Best of luck to these new services and it's really great to read about how more non-electric car owners are finding their way into Tesla Model S vehicles and getting in on the excitement.