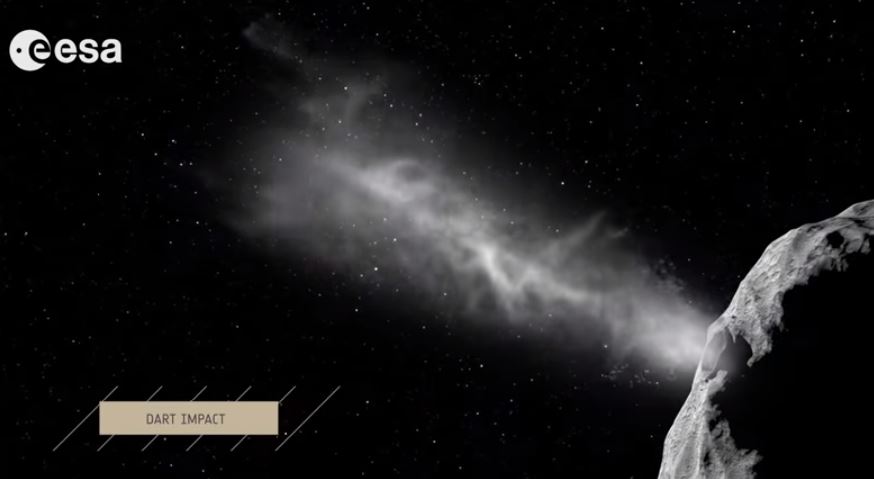 The threat of asteroids crashing into Earth isn’t a new concern. We’ve been warned about it by science fiction authors and Hollywood alike, and any kid that’s ever paid attention to dinosaurs in school knows there are bad outcomes when life and chunks of space rock meet up. The space agencies of Europe and the United States are not blind to the threat, thankfully, and they have a multi-part satellite mission in the works directed to gathering real data on how to redirect an asteroid with bad intentions for our planet, i.e., is on a collision course. Specifically, they’re planning on crashing one satellite into an asteroid and studying the effect with another satellite run by the European Space Agency (ESA).

NASA’s part of the mission is called the Double Asteroid Redirection Test (DART), and it will serve as the first demonstration of changing asteroid motion in space. The launch window begins in late December 2020, most likely on track for June 2021, for arrival at its targeted asteroid, Didymos, in early October 2022. Didymos is Greek for “twin”, the name being chosen because it’s a binary system with two bodies: Didymos the asteroid, about a half mile across, and Didymoon the moonlet, about 530 feet across, acting as a moonlet. The two currently have a Sun-centric orbit and will have a distant approach to Earth around the same time as DART’s launch window and then again in 2024.

After reaching the asteroid, DART will enter orbit around Didymoon, and crash into it at a speed of about 4 mi/s (nine times faster than a bullet) to change its speed by a fraction of one percent, an amount measurable by Earth-based telescopes for easy study. Unsurprisingly, the preferred description is “kinetic impact technique” rather than “crash” – maybe even “impact” or “strike”, if we’re avoiding terms that sound random or accidental. The mission is being led by the Johns Hopkins Applied Physics Laboratory (JHU/APL) and managed by the Planetary Missions Program Office at Marshall Space Flight Center in Alabama for NASA’s Planetary Defense Coordination Office.

NASA’s DART mission is one of two parts of an overall mission dubbed AIDA (Asteroid Impact & Deflection Assessment). Joining the agency’s Earth-protection venture is the ESA with its Hera spacecraft, named after the Greek goddess of marriage, a probe that will follow up DART’s mission with a detailed survey of the asteroid’s response to the impact. Collected data will help formulate planetary defense plans by providing detailed analysis from DART’s real-time asteroid deflection experiment. Its launch is scheduled for 2023.

Just this month, another part was added to Hera’s mission: CubeSats. This class of tiny satellites is about the size of a briefcase, and they recently made their deep space debut during NASA’s Mars InSight landing. During that mission, twin CubeSats collectively named MarCO followed along on the journey to Mars behind InSight, eventually relaying data during the landing event back to NASA’s Mission Control along with a photo of the red planet. ESA’s CubeSats, named APEX (Asteroid Prospection Explorer) and Juventas, will travel inside Hera, gather data on Didymos and its moonlet, and then both will land on their respective rocks and provide imaging from the surface.

Just to recap: Tiny satellites in a class that students and startups can and have developed and launched will travel into deep space and land on asteroids. This is big news for the democratization of space travel. As emphasized by Paolo Martino, Hera’s lead engineer in ESA’s article announcing the CubeSat mission, “The idea of building CubeSats for deep space is relatively new, but was recently validated by NASA’s InSight landing on Mars last November.”

Using kinetic energy – pure ram/crash force – isn’t the only option NASA is looking at for defending Earth from incoming asteroids. A “gravity tractor” concept would orbit a craft in a way that would change the trajectory due to gravitational tugging. Similar to how our moon has an impact on our tides or the Earth makes the Sun wobble ever so slightly, a satellite orbiting an asteroid would give pushes and pulls to set its course elsewhere.

Unfortunately, a gravity tractor likely wouldn’t be very effective for asteroids large enough to seriously threaten our planet. Also, the techniques for achieving it would require decades to develop and test in space. Laser ablation, or using spacecraft lasers to vaporize asteroid rock to change an asteroid’s course, is another technique NASA has considered, but it might be just as feasible or cost-effective to simply launch projectiles to achieve the same purpose.

Watch the below video for a visual overview of the DART and HERA missions: