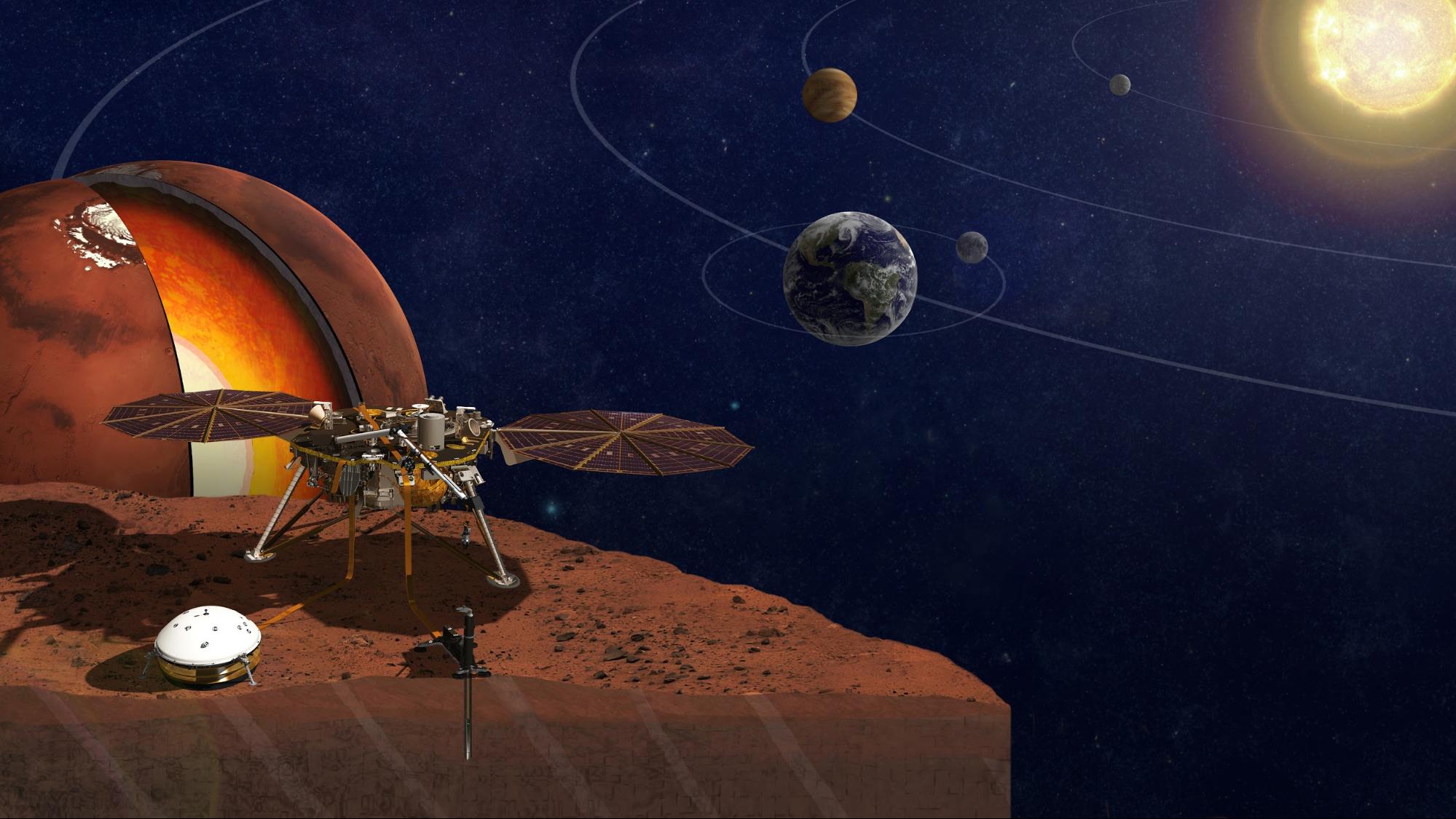 InSight will help us learn about the formation of Mars, and all rocky planets. Credit: NASA/JPL-Caltech

Researchers studying the red planet uncovered a big surprise: the Martian magnetic field is about 10 times stronger than previously thought, and constantly changing.

NASA’s InSight lander, a stationary robotic explorer tasked with studying the Martian interior, has spent just over a year on the red planet’s surface. In that brief time, it’s learned a lot of new information about our celestial neighbor. Namely, that its magnetic field is changing rapidly.

InSight is the first Mars robot to be outfitted with a magnetic sensor, which allows it to study Mars’ magnetic field up close and in detail.

“The ground-level data give us a much more sensitive picture of magnetization over smaller areas, and [pinpoints] where its coming from,” Catherine Johnson, lead author on the new study and a professor at the University of British Columbia said in a statement. “In addition to showing that the  magnetic field at the landing site was ten times stronger than the satellites anticipated, the data implied it was coming from nearby sources.”

InSight’s main objective is to help scientists understand how rocky planets grow and evolve by studying their interior. Before the lander touched down on the Martian surface, the planet’s magnetic field was measured by a fleet of satellites orbiting Mars. The satellites orbit at a distance, which could have skewed the data a bit.

There are localized magnetic fields, and thanks to InSight, we now know that they could have been attributed to ancient rocks buried beneath the planet’s surface. Johnson and her team are hopeful that InSight will be able to pinpoint which rocks are responsible and where exactly they’re located.

The new research, published this week in the journal Nature Geosciences, also suggests that the Martian magnetic fields are affected by the sun. No surprise there, as we learned with the Solar Orbiter and Parker Solar Probe missions, the sun affects everything in the solar system.

Charged particles emanate from the sun’s surface and whizz through the solar system, making up a celestial phenomenon called the solar wind. These particles carry a charge and as such can cause changes within the Martian magnetic fields when they come in contact with each other.

This was somewhat of a surprise as most of the previous observations have been from space looking down through the atmosphere.  Here on Earth, our planet’s global magnetic field protects much of the surface from the solar wind. But, since Mars doesn’t have a global magnetic field, solar particles are able to make their way through the planet’s atmosphere and to the surface.

“Because all of our previous observations of Mars have been from the top of its atmosphere or even higher altitudes, we didn’t know whether disturbances in solar wind would propagate to the surface,” said Johnson. “That’s an important thing to understand for future astronaut missions to Mars.”

InSight’s sensor recorded fluctuations in the magnetic field between day and night, including several short, mysterious pulsations around midnight. According to Johnson, this confirms that sensors on the planet’s surface can detect processes in the upper atmosphere.

So what causes these mysterious pulsations? The team believes that they form in multiple ways:  first from the solar wind and IMF enveloping the planet, and also from solar radiation charging the upper atmosphere and producing electrical currents, which in turn generate magnetic fields.

“We think these pulses are also related to the solar wind interaction with Mars, but we don’t yet know exactly what causes them,” said Johnson. “Whenever you get to make measurements for the first time, you find surprises and this is one of our ‘magnetic’ surprises.”