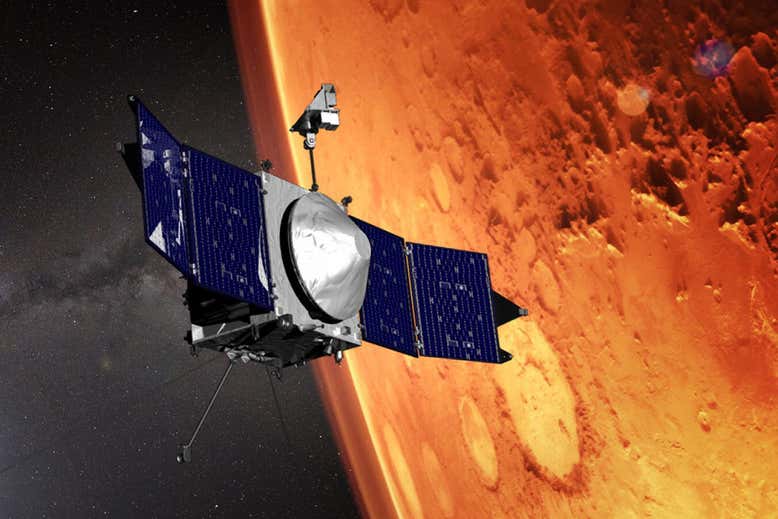 NASA’s MAVEN spacecraft has found signs of layers and rifts in the Martian atmosphere. Credit: NASA

Have you ever tuned in to your favorite radio station only to hear another station playing on top of it? That’s a result of a weird atmospheric phenomenon called a sporadic E layer.

The Earth’s upper atmosphere, called the ionosphere, is a region full of charged particles. Those particles can be blown about by the wind, forming clumps called sporadic E layers. These dense layers of ions are constantly in flux — appearing and disappearing at random — which can be disruptive to radio communications.

With the help of the Mars Atmosphere and Volatile Evolution (MAVEN) spacecraft, NASA scientists have discovered the same phenomenon at Mars, which will help scientists better understand them.  Even though these layers are quite common here on Earth, they form at altitudes that are very difficult to explore.

Mars has a thinner atmosphere that allows spacecraft, like MAVEN, to fly at lower altitudes and observe many of these weird layers.

“The low altitudes observable by MAVEN will fill in a great gap in our understanding of this region on both Mars and Earth, with really significant discoveries to be had,” Joe Grebowsky, a former MAVEN project scientist at Goddard, said in a statement.

MAVEN uncovered two types of structures — called layers and rifts — while studying the Martian ionosphere. The layers typically form suddenly and last for hours, acting like a mirror and reflecting radio signals. Scientists have known about the existence of these layers for a decade but have never been able to study them in detail until now.

“The layers are so close above all our heads at Earth and can be detected by anyone with a radio, but they are still quite mysterious,” Glyn Collinson of NASA’s Goddard Space Flight Center in Greenbelt, Maryland, and lead author on the study explained in the same statement. “Who would have thought one of the best ways to understand them is to launch a satellite 300 million miles to Mars?”

In total, the team found 34 E layers in the MAVEN data. They form higher in the Martian atmosphere and are probably too high to interfere with any future radio communications on the ground, which is good news for future human missions.

But they are troublesome here on Earth. In addition to interfering with your radio listening enjoyment, they can also block crucial radar signals that track things like aircraft and missiles.

In addition to the layers, MAVEN also found “rifts” in the planet’s atmosphere. These are gaps in the plasma — basically the opposite of a layer. These areas have never been spotted on Earth.

One thing the team noticed in the data is that the layers and rifts seem to always form at the same places. They think that’s because of how the charged particles in Mars’s ionosphere react to its tangled magnetic field.

This observation could make them much easier to find and predict at Mars, which could help scientists identify them easier here on Earth and mitigate their effects.

The research was published in a paper in the journal Nature Astronomy.