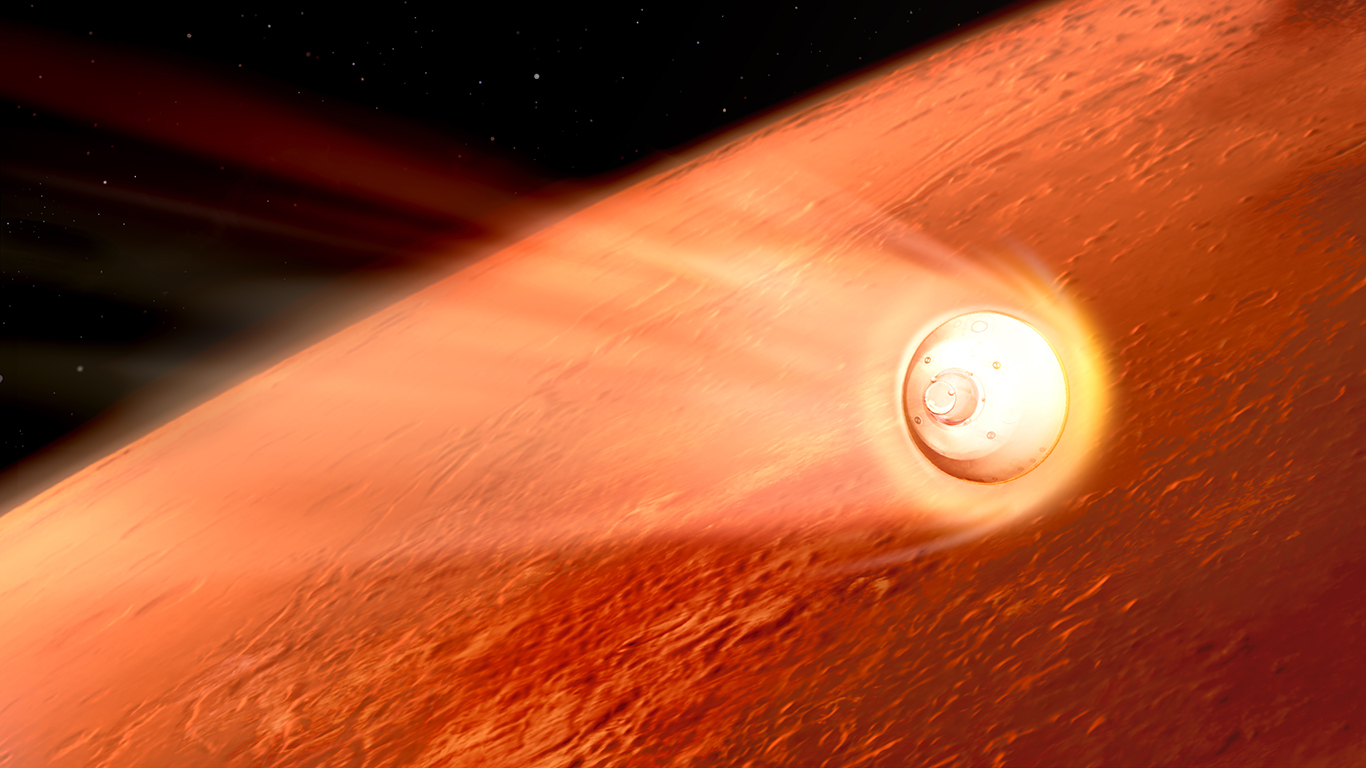 An illustration of NASA’s Perseverance rover during entry into the Martian atmosphere. Credit: NASA/JPL-Caltech

The month of the robotic invasion of Mars is upon us. Seven months ago, the United States, China, and the United Arab Emirates launched missions on a 300 million mile (480 million kilometer) journey to Mars.

Last week, two of the three missions quietly arrived and inserted themselves into Mars orbit. The final spacecraft to arrive, NASA’s Mars 2020 Perseverance mission, however, will not go gently into the Martian atmosphere. On Thursday, February 18, NASA’s latest Mars mission destined to uncover evidence of ancient microbial life on the distant planet is set to touchdown following a spectacular display of extremely complex engineering.

Launching to the Red Planet is a strategic maneuver that can only be completed once every two years. This is due to the varying speeds and the elliptical shape of the planets’ orbits around the sun. The point at which Earth and Mars are aligned close enough to minimize travel time, called an opposition, occurs only once every two years.

The most recent opposition occurred in July 2020. Four international Mars missions were intended to leave Earth that summer, however, due to required further certification of parachutes the European Space Agency’s ExoMars Rosalind Franklin rover would have to wait for its launch opportunity during the next planetary opposition to occur in 2022. That left three robotic invaders from the United States, the United Arab Emirates, and China to escape Earth’s orbit and become interplanetary superstars.

The United Arab Emirates Space Agency’s first-ever interplanetary mission, a spacecraft named Al-Amal, or the Hope Probe, was developed in collaboration between the Mohammed bin Rashid Space Center,  Laboratory for Atmospheric and Space Physics at the University of Colorado Boulder, Arizona State University, and the Space Sciences Lab at the University of California, Berkeley. It was launched on July 19, 2020, from Tanegashima Space Centre in Japan aboard an H2A202 rocket. On Tuesday, February 9, the Hope Probe was the first of the three missions to complete the journey to Mars and successfully insert itself into orbit.

The Hope Probe arrived to near-Mars orbit traveling approximately 75,000 mph (121,000 kph), far too fast to successfully achieve a safe Martian orbital insertion maneuver. In order to slow down to the approximate 11,000mph (18,000 kph) needed to be captured by Mars orbit, the spacecraft had to autonomously fire its main thrusters and perform a Mars Orbit Insertion burn lasting an agonizing 27 minutes. To compensate in the instance of a thruster failure, there was a backup safety protocol that would’ve doubled the length of the burn. After 27 grueling minutes, the Mohammad Bin Rashid Space Center located in Dubai reported that the maneuver was completed successfully and the Hope Probe had arrived at its final destination.

Unlike the American and Chinese missions to Mars which will land rovers on the surface, the United Arab Emirates’ Hope Probe will remain in Mars orbit for the duration of its mission – approximately two Martian years. The spacecraft is equipped with a suite of three instruments, two spectrometers – one infrared and one ultraviolet – to study the Martian atmosphere, and one imager to capture high-resolution images to study the surface from afar.

The same type of Mars Orbit Insertion maneuver was completed by China’s first interplanetary mission, the Tianwen-1 spacecraft. Launched from China on July 23, 2020, Tianwen-1 arrived at Mars orbit just one day after the Hope Probe on Wednesday, February 10.

The Tianwen-1 spacecraft had to autonomously complete an excruciating 11-minute “braking” burn to slow down which took it behind the planet as it was captured by Mars gravity and entered into orbit.

Like NASA’s Perseverance, the Tianwen-1 mission features a rover that will eventually land on the surface of Mars. The process to get the rover to the surface, however, varies from that of NASA’s Mars 2020 Perseverance mission.

The Tianwen-1 spacecraft is made of two components, an orbiter and a rover. Currently, it is planned that the orbiter will spend some time in Mars orbit for a period of comprehensive observation before attempting a landing of the rover in May. Ideally, the spacecraft will then touch down in a region known as Utopia Planitia.

Once the rover safely makes it to the surface it will initiate the investigation period of the mission. The rover carries a suite of scientific instruments that will be used to investigate the composition of the Martian surface searching for the potential distribution of water and ice. Similar to China’s Yutu 2 rover which is exploring the Moon, the Tianwen-1 rover also carries a panoramic camera to image the planet.

The last of the three Mars missions – NASA’s Mars 2020 Perseverance mission launched on July 30, 2020, from Cape Canaveral Space Force Station aboard a United Launch Alliance Atlas 5 rocket. As far as Mars arrivals go, the best has certainly been saved for last. Following the success of the other two missions from China and the United Arab Emirates, the stage is set for Perseverance to make its dramatic entrance.

NASA’s Mars 2020 Perseverance mission is by far the most ambitious mission to launch to Mars during the 2020 planetary transfer window. NASA is not attempting to land one, but two spacecraft on the surface of Mars. The $2.4 billion Mars 2020 mission is comprised of the Perseverance rover – powered by the heat produced by radioactive decay of Plutonium – and a first of its kind rotary helicopter called Ingenuity. It is scheduled to arrive in dramatic fashion on Thursday, February 18.

Rather than conducting a braking maneuver to slow down and enter Mars orbit, the Perseverance spacecraft will autonomously conduct the entry, descent, and landing (EDL) procedure – essentially going from traveling several thousand miles an hour to descending slowly under a parachute canopy to softly land in mere minutes.

The spacecraft – housed in a protective aeroshell with its robust heat shield facing the planet’s surface – will burst into Mars’ atmosphere traveling nearly 12,500 mph (20,000 kph). Once through, Pesevereance will ditch its heat shield and autonomously begin scanning the Martain terrain to determine its relative location and make adjustments to find an optimal landing spot. Then, a powered descent module will deploy transporting the rover the rest of the way down slowing to less than 2mph (3kph). Finally, the descent module will hover and deploy a complex harness system lowering Perseverance – and its stowaway, the Ingenuity helicopter – to the Martian surface for touchdown.

After seven months of interplanetary travel, it all comes down to the final seven minutes – the length of time the EDL process is expected to take. All spacecraft controllers back on Earth can do is watch and wait for that final telemetry reading indicating that Perseverance has successfully touched down. That is why this process has earned the nickname “seven minutes of terror.”

Beginning around 11:15 am PST (19:15 UTC) on Thursday, February 18th, NASA will provide live coverage of Perseverance’s landing attempt. The agency will carry the coverage on NASA TV and its website, as well as a number of other platforms including YouTube, Twitter, Facebook, LinkedIn, Twitch, Daily Motion, Theta.TV, and NASA App.

Follow along as our team gives you their take on the biggest stories of the week.
NASA Mars rover promises blazing entrance after China, UAE make it to Mars orbit