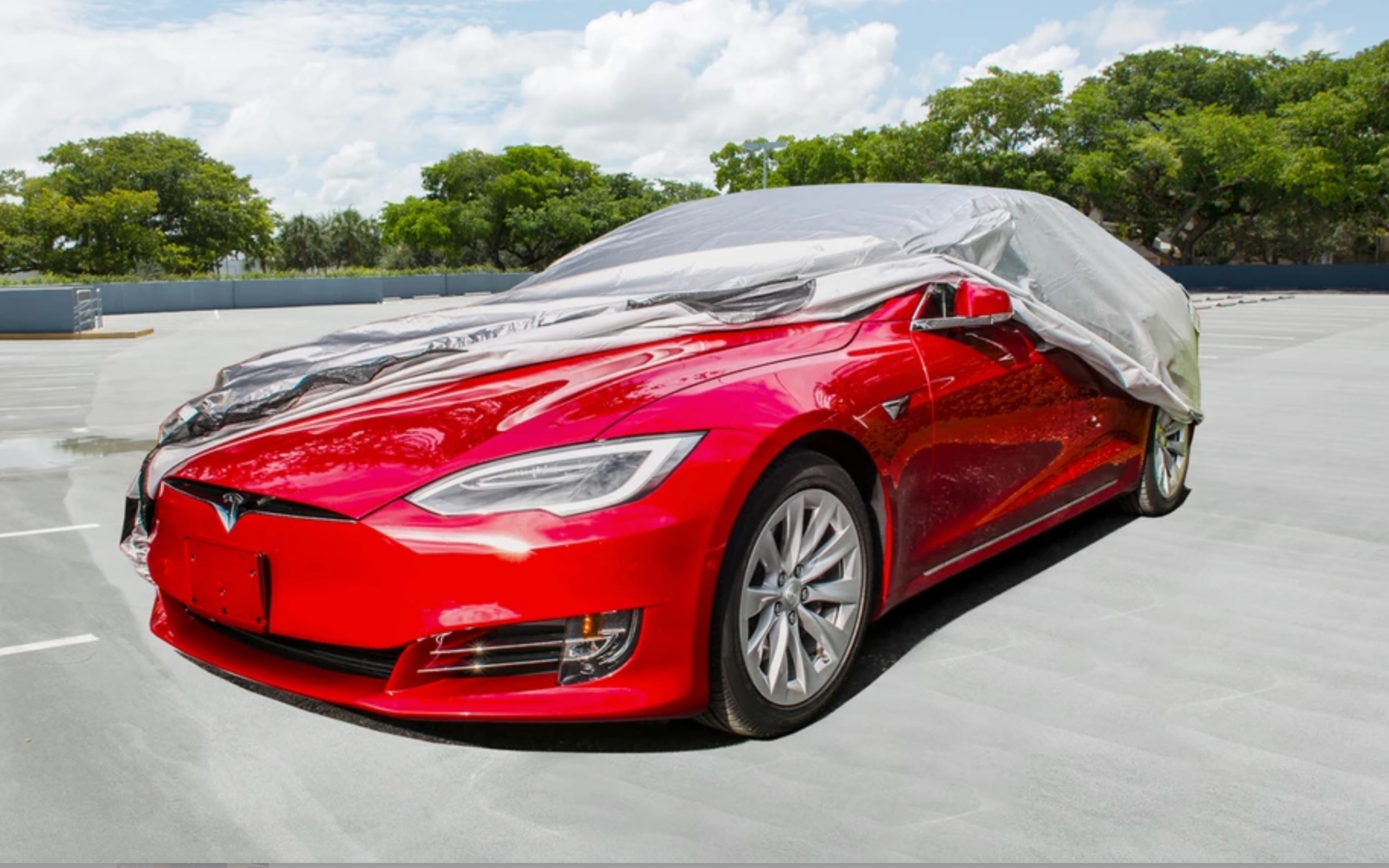 Review: Tesla Model S car cover for both indoor and outdoor use

You walk up to your beloved Model S and find her defiled. The splotch of reprehensible matter could be from a tree, a bird or your drunken neighbor– but it doesn’t matter where it came from. The damage has been done. Your paint has had a crime committed against it. A brutalizing application of gravity to excrement or sap and now you’re left with just the evidence: a crime scene made of goo where Fremont’s finest finish once gleamed.

Or perhaps your circumstances are even more first-worldly, and your issue isn’t the elements but rather the lack of elements. Your Model S quietly slumbers in a vast garage or warehouse waiting for its turn to play, as the dander of the resident mice combine with traces of asbestos and pollen from a forgotten air filter to form a velvety haze on the paint from frunk to trunk. Either way, you need a car cover. “Great!” you think, “I’ll just tap over to Elon’s shop and grab up a cover for my spaceship.” But it’s not that easy. Sure, Tesla has two covers on offer, but each is intended for EITHER the inside or the outside elements—and both are expensive. The Tesla indoor cover is $350 for silky stretch satin, completely worthless outside; the outdoor cover is $400.

The folks at EVAnnex have combined the best of both the indoor and outdoor Tesla cover into a single product. This one has no logos, slightly shorter, and priced from $129.95 as opposed to the whopping $750 you might pay if you purchased both covers from Tesla. The EVannex Model S car cover arrives in its own storage bag. In addition to looking good and making storage easy, the bag is critical for protecting your paint. You want the cover’s lining to be as free of “dirty tricks” as possible so you don’t scratch your paint with debris getting between the car and the cover. The bag is also generously sized. No worries about never getting it back in the bag—Whew! 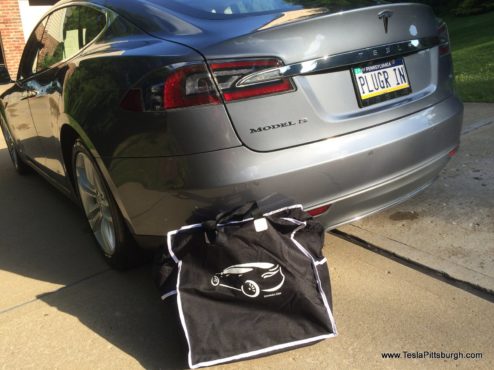 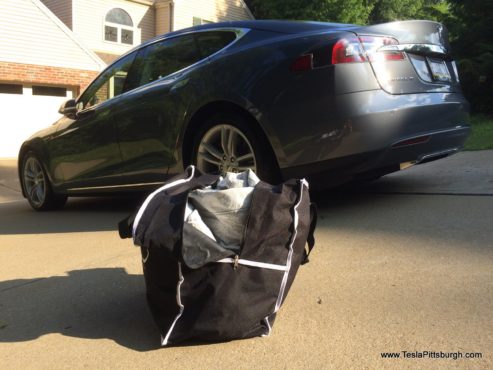 The cover is made of a water-resistant material and lined with a soft cotton. The fit is closely tailored to the shape of the Model S and even though the stitching pattern is different from Tesla’s offerings, I think the EVAnnex cover’s lines are more complementary to the shape. All seams are double-stitched and when bagged, the cover weighs about 10 ½ pounds. It isn’t thick enough to provide dent protection (neither are Tesla’s) but will shrug off abrasions and scuffs.

Deploying the cover takes only a few minutes. The first time I installed the cover it was folded outside-out, which is not how the cover needs to be oriented for easy installation. In fact, if you watch their own installation video, the cover is clearly folded inside-out in their demonstration. I don’t want to make a big case about it, but they really should ship the covers already folded this way. I’m an experienced camper so my skills at deciphering weirdly folded tents helped out. Note also that if you stored the cover inside-out but NOT in a bag, you’d end up with a very dirty lining on your paint. Score another point for that nice storage bag.

Provided it has been properly stored, putting the cover on is very fast and easy.  You just plunk the blob on your hatch glass. All the mesh patches and the charge port cover will keep you oriented if you get confused. Unroll the cottony mass until it reaches the frunk.

Then you find the side rearview mirror pockets. These will be your primary positioning landmarks. Tuck the mirrors into the pockets, which will also partially drape each side. Flip the rest of each side down while you’re already there.  Then stretch the elasticized nose and trunk sections down and under each end. The cover might take a slight tug here or there, but generally, I’ve found it settles on by itself most of the time—and faster than it takes to read this. The tailoring is really well done and fits the car snugly.

I don’t have my mirrors set to auto-fold, but I wanted to see what the cover’s fit would be like if I did. I also wanted to verify the door handles had room to operate. While the cover clings to the metal curves of the S, there is still ample extra fabric in these critical places to allow the parts to move unobstructed. EVAnnex also points out that cars with spoilers or even the new refreshed fascia are not a problem for this cover. Like the factory covers, the EVAnnex cover has mesh panels to accommodate the airflow necessary when charging from the fans deep in the throat of the Model S’ nose. 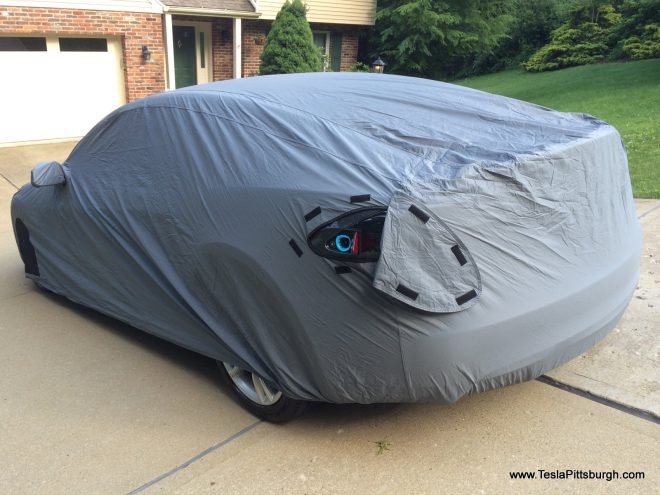 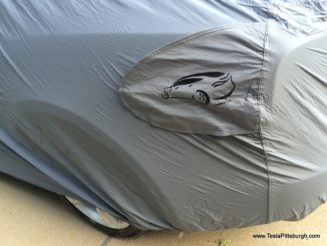 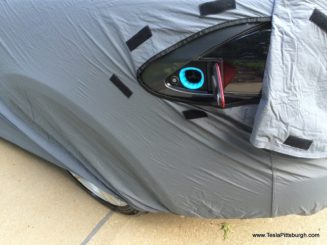 The cover is otherwise unadorned whereas Tesla’s covers have prominent logos and lettering. The Model S car cover gives my Serena a little shorter hemline than the Tesla cover offers, but it is definitely secure on the vehicle. If you’re really concerned about parking in high winds, there are grommets mounted to the cover’s bottom near the B-pillar.  These can be used to tie the two sides together underneath the car, eliminating troublesome loose ends. Worth noting, the cotton lining does have the possibility of getting wet. Water is unlikely to penetrate the top of the cover, but vulnerable areas near the mesh panels and charge port flap could become wet in a prolonged or severe storm. That risk is quite small, however.

Removing the cover is as easy and fast as putting it on, just reversed. Pop the ends, flip the sides and roll it from the front of the car. Take the lump and jam it as elegantly as you’re able into the storage bag.

The EVannex Model S car cover undercuts Tesla significantly in price while adding features with no real downsides. It’s cut perfectly to the contours of the Classic Model S (we’re told it also fits the new fascia Model S) and rugged enough to stand up to outdoor use. In short, you can trust it. If you need a cover, it’s with great conviction that I can say the manufacturer really pulled it off this time. (So to speak.)

Review: Tesla Model S car cover for both indoor and outdoor use