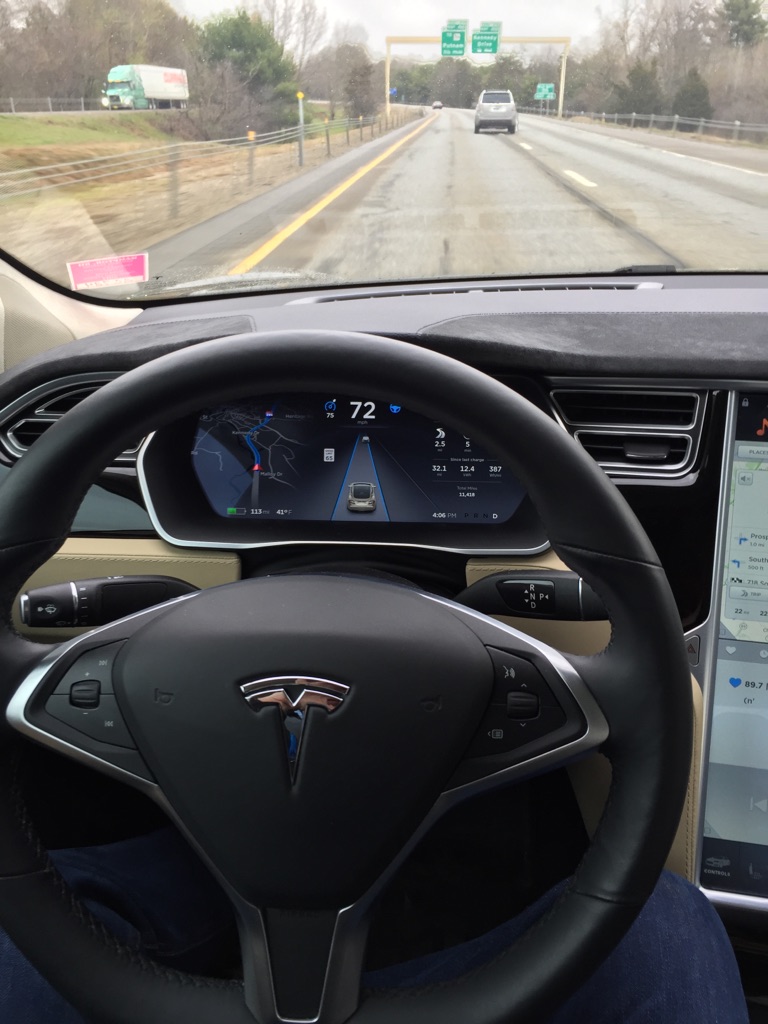 New details were released of a driver that was killed after his Autopilot enabled Tesla Model S was involved in a deadly crash with a tractor trailer. The crash took place on May 7 in Williston, Florida, when 40 year old Joshua Brown’s Tesla Model S on Autopilot failed to detect a tractor trailer under a brightly lit sky and proceeded to pass underneath it.

According to a statement issued by Tesla on its blog,

“What we know is that the vehicle was on a divided highway with Autopilot engaged when a tractor trailer drove across the highway perpendicular to the Model S. Neither Autopilot nor the driver noticed the white side of the tractor trailer against a brightly lit sky, so the brake was not applied. The high ride height of the trailer combined with its positioning across the road and the extremely rare circumstances of the impact caused the Model S to pass under the trailer, with the bottom of the trailer impacting the windshield of the Model S.”

This accident marks the first Autopilot related fatality in more than 130 million miles of driving bringing to light that fatalities are statistically inevitable with autonomous driving cars.

The Police beat of the May 7 incident describes the event in tragic detail.

“The top of Joshua Brown’s 2015 Tesla Model S vehicle was torn off by the force of the collision. The truck driver, Frank Baressi, 62, Tampa was not injured in the crash. The FHP said the tractor-trailer was traveling west on US 27A in the left turn lane toward 140th Court. Brown’s car was headed east in the outside lane of U.S. 27A. When the truck made a left turn onto NE 140th Court in front of the car, the car’s roof struck the underside of the trailer as it passed under the trailer. The car continued to travel east on U.S. 27A until it left the roadway on the south shoulder and struck a fence. The car smashed through two fences and struck a power pole. The car rotated counter-clockwise while sliding to its final resting place about 100 feet south of the highway. Brown died at the scene.” Tesla has released a full and comprehensive statement regarding this incident. As is its usual custom, it reiterates that Autopilot is still in beta mode and that the driver always remains ultimately responsible for the safe operation of the car. From the description of the accident, it seems like death or serious injury was inevitable even if the driver had been in full control of the car. This is definitely one of those “corner cases” Elon Musk says make designing autonomous driving software that can react appropriately to every imaginable situation.

Joshua was a notable member of the Tesla community having often shared his endorsement of Tesla’s Autopilot system by way of the many personal driving videos he posted to YouTube.

Here is Tesla’s statement in full:

We learned yesterday evening that NHTSA is opening a preliminary evaluation into the performance of Autopilot during a recent fatal crash that occurred in a Model S. This is the first known fatality in just over 130 million miles where Autopilot was activated. Among all vehicles in the US, there is a fatality every 94 million miles. Worldwide, there is a fatality approximately every 60 million miles. It is important to emphasize that the NHTSA action is simply a preliminary evaluation to determine whether the system worked according to expectations.

Following our standard practice, Tesla informed NHTSA about the incident immediately after it occurred. What we know is that the vehicle was on a divided highway with Autopilot engaged when a tractor trailer drove across the highway perpendicular to the Model S. Neither Autopilot nor the driver noticed the white side of the tractor trailer against a brightly lit sky, so the brake was not applied. The high ride height of the trailer combined with its positioning across the road and the extremely rare circumstances of the impact caused the Model S to pass under the trailer, with the bottom of the trailer impacting the windshield of the Model S. Had the Model S impacted the front or rear of the trailer, even at high speed, its advanced crash safety system would likely have prevented serious injury as it has in numerous other similar incidents.

It is important to note that Tesla disables Autopilot by default and requires explicit acknowledgement that the system is new technology and still in a public beta phase before it can be enabled. When drivers activate Autopilot, the acknowledgment box explains, among other things, that Autopilot “is an assist feature that requires you to keep your hands on the steering wheel at all times,” and that “you need to maintain control and responsibility for your vehicle” while using it. Additionally, every time that Autopilot is engaged, the car reminds the driver to “Always keep your hands on the wheel. Be prepared to take over at any time.” The system also makes frequent checks to ensure that the driver’s hands remain on the wheel and provides visual and audible alerts if hands-on is not detected. It then gradually slows down the car until hands-on is detected again.

We do this to ensure that every time the feature is used, it is used as safely as possible. As more real-world miles accumulate and the software logic accounts for increasingly rare events, the probability of injury will keep decreasing. Autopilot is getting better all the time, but it is not perfect and still requires the driver to remain alert. Nonetheless, when used in conjunction with driver oversight, the data is unequivocal that Autopilot reduces driver workload and results in a statistically significant improvement in safety when compared to purely manual driving.

The customer who died in this crash had a loving family and we are beyond saddened by their loss. He was a friend to Tesla and the broader EV community, a person who spent his life focused on innovation and the promise of technology and who believed strongly in Tesla’s mission. We would like to extend our deepest sympathies to his family and friends.