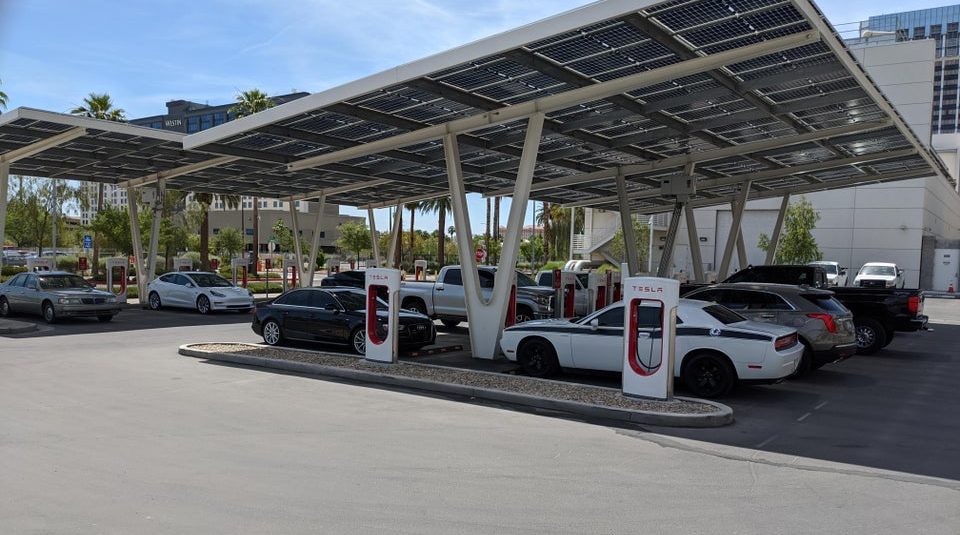 A Tesla Supercharger station in Las Vegas, Nevada, just off of the Strip, became a parking lot for petrol-powered cars.

The 35-stall Supercharger station located at the High Roller, a 550-foot-tall Ferris Wheel popular among Vegas tourists, is the site of Tesla’s high-powered V3 Superchargers.

Amid continued lockdowns in much of the nation and a significant drop in the number of drivers on the roads and drop in worldwide Supercharger usage, local drivers of gas-powered vehicles have found Tesla’s Supercharger station to be their ideal private parking space.

Reddit user u/Sam1Ron shared the photograph of the numerous vehicles occupying Supercharging spaces. U/Sam1Ron stated the Vegas Supercharger area had turned into a “blizzard,” referring to ICEing, the acronym used to describe the act of gas-powered parking cars at electric vehicle chargers.

Some within the Reddit thread speculated that the owners parked their vehicles in the location due to the excessive shade that the solar awning provides. This shade keeps the interior of each car cool. Currently, temperatures in Las Vegas will reach a high of at least 101 degrees Fahrenheit for the remainder of the week, according to Weather.com.

While the positioning is understandable due to the shade, each non-electric vehicle parked in a charging spot violates Nevada State Law.

Nevada Law NRS 484B.468 states, “A person shall not park a vehicle in a space designated for charging electric or hybrid electric vehicles by a sign or markings that meet the requirements of subsection 2, whether on public or privately owned property if the vehicle is not connected to the charging station for the purpose of charging.”

The first violation carries a fine of $100, the second offense carries a $200 penalty, and any subsequent actions will result in a ticket between $400 and $750.

Unfortunately, ICEing is a common tactic used against EV owners by their gas-powered counterparts. In the past, large groups have utilized a “park-in” to block Tesla Superchargers from being used in protest of electric vehicles. With the growing presence of battery-electric cars on the road, parking in these spaces in demonstration of the EV movement becomes bothersome for many owners.