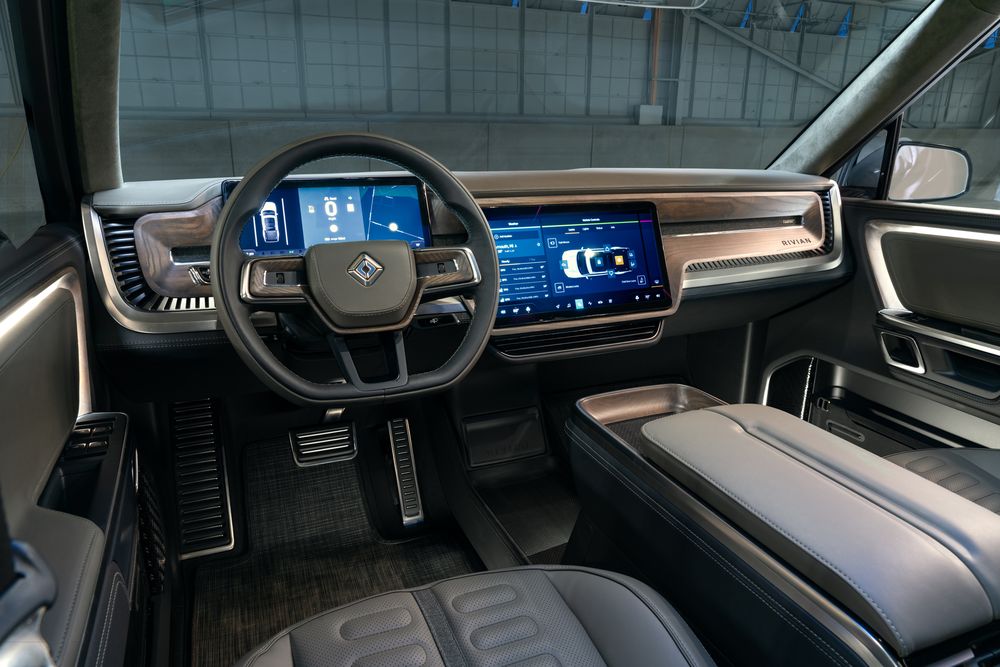 Rivian’s Associate Director of Self-Driving, Oliver Jeromin, discussed a driver monitoring system that’s part of the company’s full self-driving suite in a recent interview. Thanks to a recently published patent application by the all-electric carmaker, more details about how such a system would work are now available.

The patent application, titled “Occupant Awareness Monitoring for Autonomous Vehicles,” was published on July 25, 2019, under serial number US 2019/0225228. It describes a multi-part system wherein driver activity is interpreted through synced wireless devices either on a smartphone or directly with the vehicle itself. If a driver’s awareness is needed and determined not to be available, the vehicle will take remedial action to ensure a high level of safety.

The five levels of vehicle autonomy defined by the Society for Automotive Engineers (SAE) (and adopted by the U.S. National Highway Traffic Safety Administration) range from level 0 with no automation to level 5 with full automation. Levels 3-5 specifically require that their human driver (or passenger if Level 5) be ready to retake control of the vehicle or respond in some way under specific circumstances. That said, Rivian’s invention described in this application seeks to detect whether the necessary level of readiness is present in the driver. 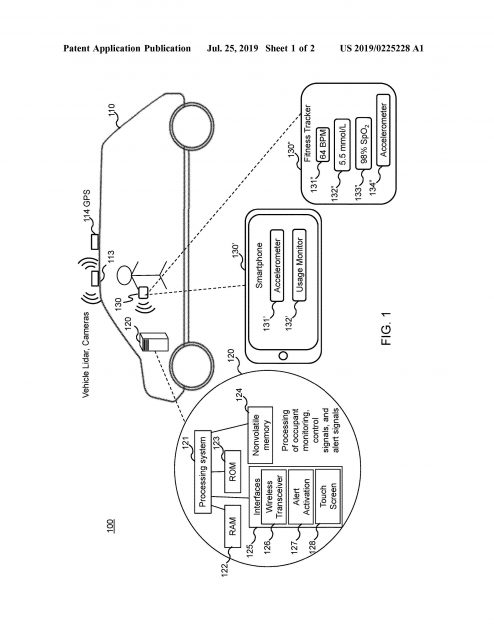 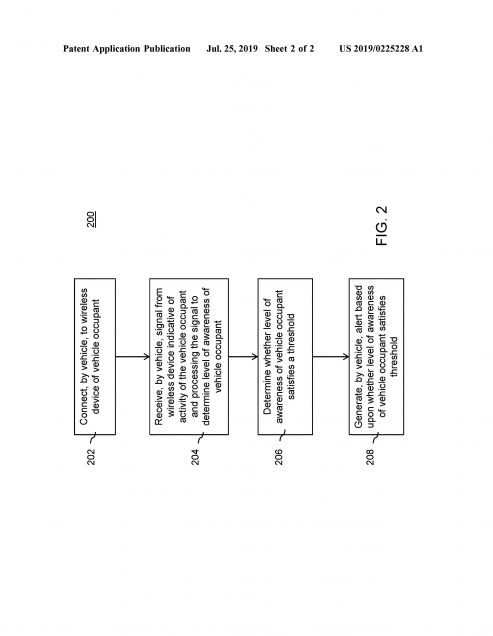 “The present inventors have recognized the technological problem of a potential need for human intervention in connection with the operation of autonomous automotive vehicles featuring autonomy levels 3, 4, or 5, and have observed a need for a technological solution to monitor the awareness of vehicle occupants,” the application states in the background portion of the description.

The monitoring process is described to work as follows:

To accomplish these steps, Rivian proposes in the application to pair electronic devices that can track and provide driver data to the automated driving program, e.g., general smartphones or tablets, finesses trackers, and electronically connected medical devices. If a driver is watching a movie or has vital signs indicating sleep (breathing rate, pulse, etc.), the vehicle would know the driver is not ready to resume control if needed and respond appropriately.

Also described in the patent application are enforcement ideas such as a series of touch screen prompts requiring a response, and in the event of no response, the vehicle would pull over and stop. If an emergency situation were detected via the connected medical devices, the car would pull over and call 911. Along with a fitness tracker, other medical devices suggested for use in the application are glucose monitors, blood oxygen monitors, and breathalyzers.

Driver attentiveness while using self-driving features is already a problem under Level 2 programs where warning prompts are fairly strict about keeping eyes on the road. Tesla, for instance, regularly reminds its customers that Autopilot isn’t a full self-driving system yet and needs complete driver attention. However, as headlines and Tesla crash investigations have indicated, the warning isn’t always heeded.

Rivian’s driver monitoring system certainly sounds like a good step towards increasing safety measures as the carmaker continues to develop its product lines. The proposed syncing of medical devices might run into some resistance on privacy grounds, but the overall payoff that a safe self-driving experience will provide may find cause for compromise. Overall, it’s clear Rivian has safety as a priority as it prepares to enter the automotive arena with the R1T pickup truck and R1S SUV later next year.