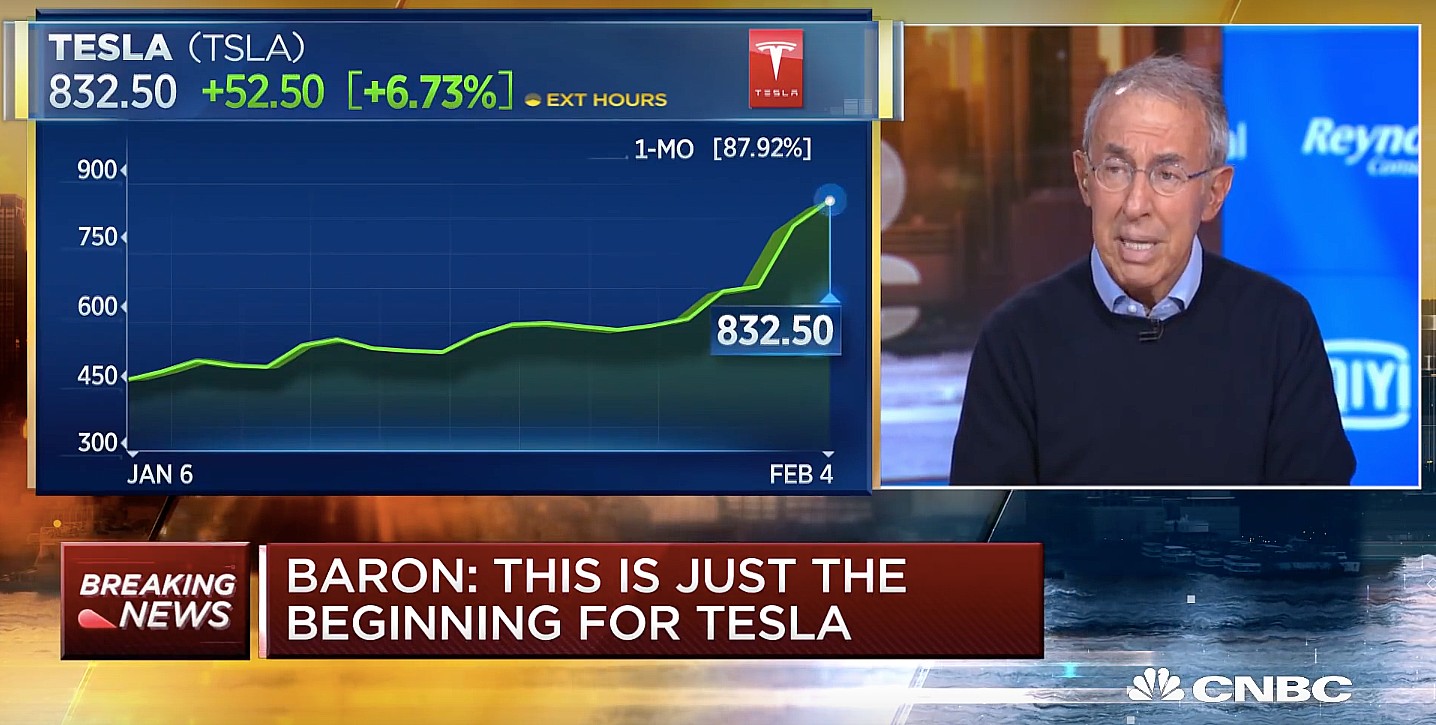 Ron Baron has $1B in Tesla stock and says it’s far from over: ‘I’d buy more’

Tesla (NASDAQ:TSLA) could hit $1 trillion in revenue by 2030 according to Ron Baron, a Billionaire investor who runs New York City-based Baron Capital and Baron Funds.

Baron Capital currently holds 1.63 million shares of Tesla stock, and they have no plans to sell any of it.

Baron appeared on CNBC’s “Squawk Box” Tuesday morning where he stated Tesla’s potential is limitless. He believes that Tesla is nowhere near finished its meteoric rise in price. “There’s a lot of growth opportunities from that plant going forward,” he said. “[Tesla] could be one of the largest companies in the whole world.”

Tesla stock was priced at $430.26 on 2020’s first day of trading on January 2. The stock has exploded since then, rising nearly 20% in a single day on February 3rd and nearly doubling its value this year alone.

Baron’s decision to invest $357 million into Tesla in 2014 has paid dividends. His 1.63 million shares now have a value of $1.467 billion. But his reasoning for backing Tesla and becoming one of the company’s most successful bulls had to do with Musk’s vision for the world.

“Whether Elon Musk is successful or not I am really glad to have invested in this company because I’m helping–this guy is saving the Earth,” Baron said about the Tesla CEO. “Brilliant guy, great businessman, and saving the planet.”

Musk’s drive to create environmentally-friendly vehicles has been an astounding success, but not everyone is a believer.

Senior Research Analyst Craig Irwin from Roth Capital spoke about his $350 price target that was accompanied by a sell rating on Squawk Box. “Reality is going to set-in” for the Silicon Valley-based electric car company, he said. While he believes it is a good company with a solid financial plan, he states traditional automakers will begin developing vehicles that can compete with Tesla’s battery technology and performance. “This is a company that will see decelerating sales.”

Meanwhile, Baron continues to remain confident in Tesla and states he will not make any moves when it comes to the company’s holdings. In fact, he said that if it were completely up to him, Baron Capital would buy more.

Tesla is coming off an extremely positive Q4 2019 earnings report where the company reported $7.38 billion in revenue and deliveries of 112,000 vehicles in the last three months of the year. The company also announced that its upcoming all-electric crossover Tesla Model Y is ahead of schedule, citing improved production efficiency as the reason for its early rollout of the car.

Ron Baron has $1B in Tesla stock and says it’s far from over: ‘I’d buy more’