Paired with observations and comments from sources familiar with the company, all signs seem to indicate that SpaceX is planning to recover their first Crew Dragon spacecraft with a giant inflatable cushion, to be towed a hundred or so miles off the coast of California by one of the company’s Port of LA-stationed recovery vessels.

Despite a minor mishap during some sort of inaugural sea-trial of a custom Crew Dragon mass simulator, SpaceX technicians are pushing ahead with a test campaign intended properly characterize exactly how to best recover a Dragon while side-stepping around the problems caused by seawater immersion.

Inside the clean room at SpaceX HQ, Crew Dragon is nearing completion. This will be the capsule to make the first crewed flight, currently slated for April 2019.#spacex #CrewDragon @Teslarati pic.twitter.com/tjzuwfGV2O

Why recover your Dragon?

First off, why would SpaceX choose to develop a new method of Dragon recovery – different than the company’s current experience with simply landing the capsules in the ocean – with the expectation that it will debut during the recovery of Crew Dragon after its very first demonstration mission (DM-1)? A huge number of unknowns and major questions remain, but the decision to attempt to avoid seawater immersion during the DM-1 Dragon recovery is very likely no coincidence.

Over the last several years, SpaceX engineers and technicians have learned a huge amount from recovering, refurbishing, and even reusing Cargo Dragons to resupply the International Space Station for NASA. Of all the lessons learned, the most unequivocal has to be a newfound appreciation for just how difficult it is to safely and reliably reuse spacecraft and rocket components after landing and being immersed in seawater. Despite SpaceX’s growing experience with reusing both Falcon 9 and Cargo Dragon, Dragons still typically require a bare minimum of 6-12 months of refurbishment before they are ready for another launch. 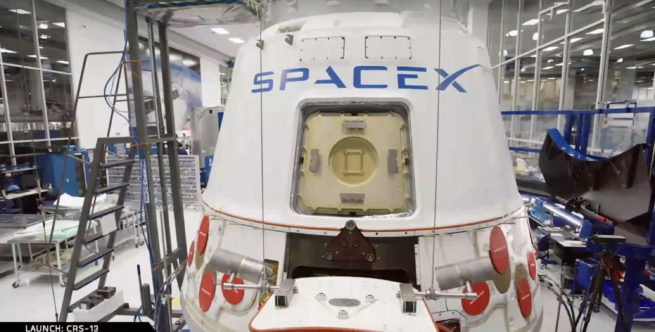 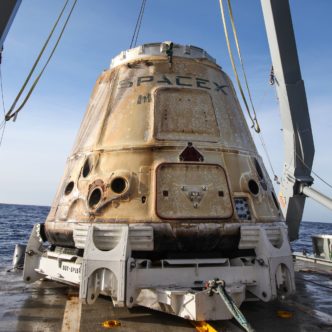 All Crew and Cargo Dragons are built and refurbished in the same processing facility, a clean-room inside SpaceX’s Hawthorne, CA factory. (SpaceX)

For Crew Dragon’s DM-1 debut, it thus makes sense that SpaceX wants to recover the spacecraft in such a way that it is exceptionally easy to rapidly refurbish. Perhaps just several months after that capsule returns to Earth, currently expected no earlier than December 2018, SpaceX’s first crewed Crew Dragon demonstration’s tentative April 2019 launch debut will depend entirely on the completion and review of an In-Flight Abort (IFA) test planned just one month prior, March 2019.

The planned IFA test of Crew Dragon hinges entirely on DM-1 and Dragon refurbishment because the present plan (and launch schedule) absolutely depends on reflying DM-1’s Crew Dragon capsule, potentially recovered from orbit as few as three months prior.

With a successful 2015 Pad Abort already under Crew Dragon’s belt, SpaceX voluntarily chose to conduct an additional complimentary in-flight abort not explicitly required by NASA, designed to demonstrate that Dragon will be able to safely extract astronauts from a failing rocket at the point of peak aerodynamic pressure (Max-Q). Essentially, a combination of successful aborts both on the launch pad and during Max-Q would theoretically demonstrate beyond any reasonable doubt that Crew Dragon really is capable of safely aborting a launch and protecting its astronauts at any point during launch.

Cargo Dragon has demonstrated that – apparently – no amount of heroics can refurbish the recovered spacecraft in just a small handful of months after seawater immersion, not without major changes to its design. As such, preventing that with some sort of inflatable cushion (or even Mr Steven’s net) would likely save many months of drying, cleaning, and requalification testing of all externally impacted components. 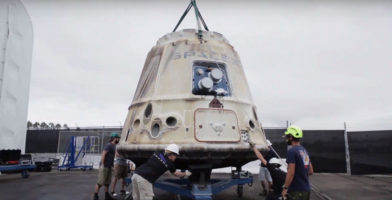 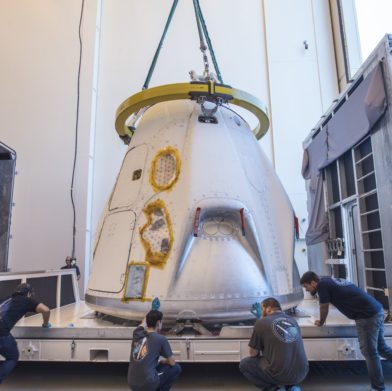 How to recover your Dragon

While the “why” is fairly obvious at this point, the “how” of actually making such a cushioned recovery happen is far less clear. Still, we at least know from several recent comments from SpaceX CEO Elon Musk and statements made in environmental impact analyses that the company has been considering such recoveries for some time.

Despite the fact that Crew Dragon’s original propulsive landing capability was nixed due to the unlikelihood of NASA ever certifying it for crewed landings and the expense required to attempt that certification, there is still clearly some latent interest (and value) in precisely landing Crew Dragon, even if only to speed up capsule and crew recovery after splashdown. A March 2018 preliminary environmental impact analysis of Gulf of Mexico Dragon recoveries – as a backup to bad weather in the Pacific and Atlantic – made the interest in precision exceptionally clear.

“The splashdown zone is a circle with a radius of approximately 5.4 nautical miles. … Dragon has been designed to perform precision landings in order to minimize the size of the splashdown zone and recovery time.”

Admittedly, a circle with a diameter of 10.8 nautical miles (20 km) does not exactly scream “precision” and ~20 km is likely around a thousand times less precise than what’s needed to land on the 30m-diameter inflatable structure present at Berth 240, but it’s probable that the splashdown zone as discussed is a worst-case scenario meant to give SpaceX’s recovery team plenty of wiggle room. 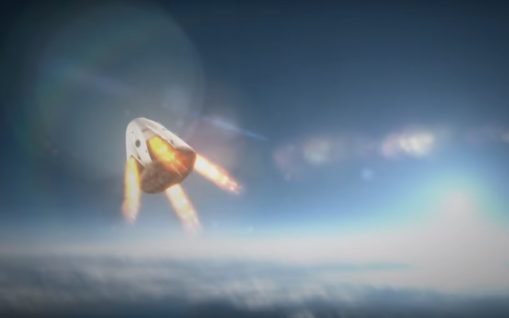 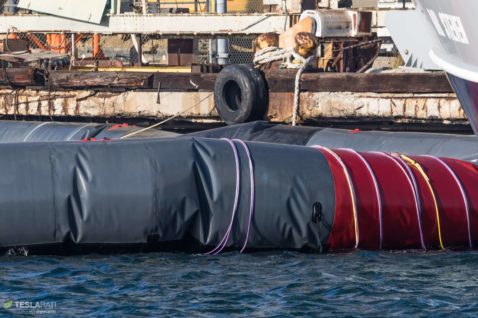 In place of propulsive landing, it appears that a giant inflatable cushion is the new solution for quick reuse. (Pauline Acalin)

Musk also took a few seconds of a Falcon Heavy post-launch press conference to briefly describe Mr Steven, and he just so happened to touch on fairing and Dragon recovery:

“And we’ve got a special boat to catch the fairing. … It’s like a giant catcher’s mitt in boat form. I think we might be able to do the same thing with Dragon. So…if NASA wants us to, we can try to catch Dragon. Literally, it’s meant for the fairing, but it would work for Dragon, too.” – Elon Musk

Mr Steven takes one for the team

Even more experimental than fairing recovery, SpaceX happened to experience a minor incident while attempting to test aspects of its prototype Dragon catcher apparatus in early August. Partially captured by Teslarati photographer Pauline Acalin, SpaceX technicians were lifting a Crew Dragon heatshield mass simulator with a healthy topping of buoys onto Mr Steven. Moments after it was lowered onto the deck, the whole setup disappeared below the vessel’s side rails in a massive boom. 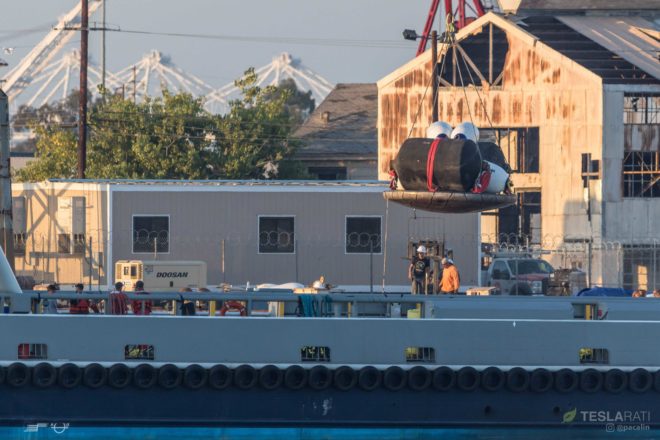 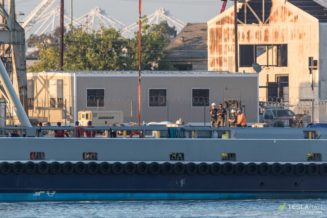 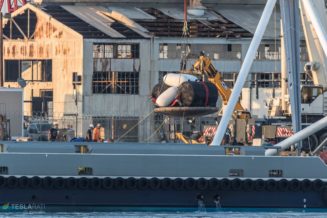 According to sources familiar with SpaceX’s recovery fleet, the mishap was much less severe than the deafening noise it produced seemed to indicate from the sidelines. They described the aftermath as “an annoying accident” that was unlikely to take any significant amount of time to repair. More likely than not, Mr Steven’s wooden deck suffered some level of structural degradation after several years of active use, something that SpaceX technicians only discovered after loading (or maybe dropping) a heavy Dragon mass simulator aboard.

Regardless, one could certainly say that the test in question was more or less a success, as it most certainly demonstrated whether Mr Steven’s deck was actually capable of supporting the heavy test article (it was not). A few repairs and structural reinforcements later, the vessel is likely already back in working order, with photos taken on August 19th showing that the focus has returned to the vessel’s arms (two of which must have been removed earlier this week).