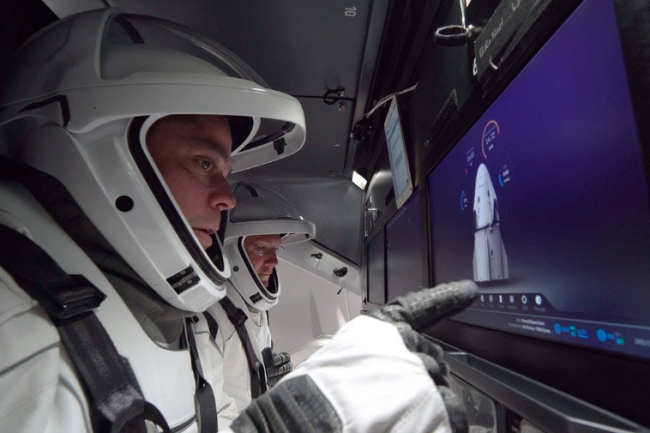 NASA astronauts Bob Behnken and Doug Hurley will fly to the space station aboard a Crew Dragon spacecraft on May 27. Credit: NASA

Ever wanted to pilot a spaceship? Now you can try your luck at docking the SpaceX Crew Dragon spacecraft with the International Space Station.

SpaceX is set to make history on May 27 as the California-based rocket builder launches the first crew of astronauts from U.S. soil in nearly a decade. In advance of that historic flight, the company is giving you the chance to sit in the Dragon’s driver’s seat.

That’s thanks to a docking simulator SpaceX just posted online. The computer simulation is very close to what Doug Hurley and Bob Behnken will experience on their trip later this month.

“This simulator will familiarize you with the controls of the actual interface used by NASA astronauts to manually pilot the SpaceX Dragon 2 vehicle to the International Space Station,” says SpaceX.

SpaceX’s Crew Dragon capsule is designed to be autonomous. But during this first test flight with people on board, the crew’s objectives is to test all the craft’s onboard systems. To that end, during two different portions of the flight, Hurley will take over the reins and manually fly the Dragon.

So what can you expect from your docking experience? First of all, it’s a lot harder than it looks. The simulation begins with your spacecraft off course. You can see the ISS hanging in space, and need to orient your spacecraft with the space station’s docking port. You will be equipped with two sets of controls in order to complete the task. Just remember, in space, you have a lot more mobility than on Earth, and you’ll probably need to roll the spacecraft in order to line it up properly with the orbital outpost.

One set of controls will allow you to do just that. This panel controls the Dragon’s roll, pitch, and yaw, while the other set controls movement (forward, backward, etc.). There will be indicators to tell you if you’re on or off course. Additionally, it’s important to remember that docking is a very slow process, so be sure to make sure you do it correctly and don’t go barreling towards the spacecraft. Slow and steady achieve docking success.

It may take you a few tries, but if you take it slow, you may end up in the right parking spot. If not, you may damage the space station.