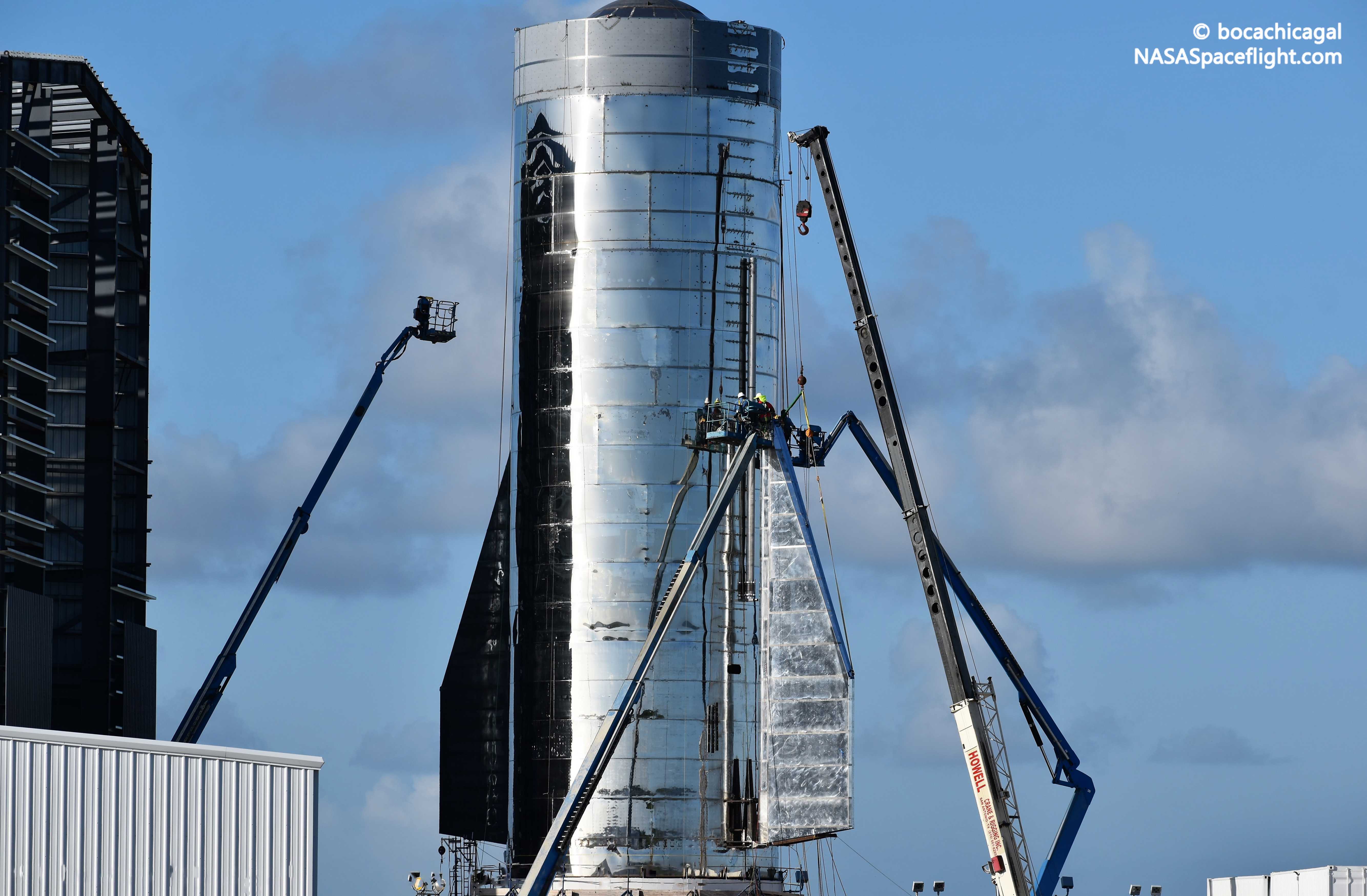 In the near future, SpaceX wants to begin putting its first two full-scale Starship prototypes through a series of increasingly challenging test flights, eventually culminating in their first Super Heavy-supported orbital launch attempts.

SpaceX CEO Elon Musk took to Twitter over the last 48 or so hours to answer a number of questions about how exactly Starship is meant to make it through orbital reentries – by far the most strenuous period for the ship and without a doubt the single most challenging engineering problem SpaceX must tackle.

Discussed yesterday on Teslarati, SpaceX technicians began the process of attaching numerous Tesla Model S/X battery packs to a subcomponent that will eventually be installed inside Starship Mk1’s nose, offering a storage capacity of up to 400 kWh. The need for all that power (Crew Dragon relies on a few-kWh battery) is directly related to Starship Mk1’s methods of reentry and recovery, recently described in detail by Elon Musk.

As noted above, ~400 kWh of batteries are needed to power the electric motors that will actuate Starship’s massive control surfaces – two large aft wings and two forward canards/fins. According to Musk, Starship’s “stability is controlled by (very) rapid movement of rear & fwd fins during entry & landing”, meaning that the spacecraft will need to constantly tweak its control surfaces to remain in stable flight.

By far the biggest challenge SpaceX faces is ensuring that Starship can survive numerous orbital-velocity reentries with little to no wear and tear, a necessity for Starship to be cost-effective. In Low Earth Orbit (LEO), Starship will be traveling no less than 7.8 km/s (Mach 23, 17,500 mph) at the start of atmospheric reentry. In simple terms, the process of slowing from orbital velocity to landing on Earth involves turning the vast majority of that kinetic energy into heat. As Musk noted yesterday, this reality is just shy of unavoidable but there is some flexibility in terms of how quickly one wants to convert that energy into heat.

The fastest route to Earth would involve diving straight into the atmosphere, dramatically increasing peak heating on a spacecraft’s surface to the point that extremely exotic heat shields and thermal protections systems become an absolute necessity. SpaceX wants to find a middle ground with Starship in which the spacecraft uses its aerodynamic control surfaces and body to generate lift, slowly and carefully lowering itself into Earth’s atmosphere over a period of 15+ minutes. Musk notes that this dramatically lessens peak heating at the cost of increasing the overall amount of energy Starship has to dissipate, a bit like cooking something in the oven at 300 degrees for 30 minutes instead of 600 degrees for 10 minutes.

To an extent, Starship’s reentry profile is actually quite similar to NASA’s now-retired Space Shuttle, which took approximately 30 minutes to go from its reentry burn to touchdown. Per the above infographic, it looks like Starship will take approximately 20 minutes from orbit to touchdown, owing to a dramatically different approach once it reaches slower speeds. Originally described by Musk in September 2018 and again in recent weeks, Starship will essentially stall itself until its forward velocity is nearly zero, after which the giant spacecraft will fall belly-down towards the Earth, using its wings and fins to maneuver like a skydiver. The Space Shuttle landed on a runway like a (cement-encased) glider.

This unusual approach allows SpaceX to sidestep the need for huge wings, preventing Starship from wasting far more mass on aerodynamic surfaces it will rarely need. The Space Shuttle is famous for its massive, tile-covered delta wing and the leading-edge shielding that partially contributed to the Columbia disaster. However, it’s a little-known fact that the wing’s size and shape were almost entirely attributable to US Air Force demands for cross-range performance, meaning that the military wanted Shuttles to be able to travel 1000+ miles during reentry and flight. This dramatically constrained the Shuttle’s design and was never once used for its intended purpose.

SpaceX thankfully doesn’t have its own “US Air Force” stand-in making highly consequential demands (aside from Elon Musk 😉). Instead, Starship will continue the SpaceX tradition of vertical landing, falling straight down – a bit like a skydiver (or a brick) – on its belly and flipping itself over with fins and thrusters for a propulsive vertical landing. In this way, Starship doesn’t have to be a brick forced to fly, like the Shuttle was – it just needs to be able to stably fall and quickly flip itself from a horizontal to vertical orientation.

Additionally, Starship is built almost entirely out of steel, whereas the Shuttle relied on an aluminum alloy and needed thermal protection over every square inch of its hull. Steel melts at nearly twice the temperature of the Shuttle’s alloy, meaning that Starship will (hopefully) be able to get away with nothing more than ceramic tiles on its windward half, saving mass, money, and time. Once Starship completes its first 20 km (12.5 mi) flight test(s), currently scheduled no earlier than mid-October, SpaceX will likely turn its focus on verifying Starship’s performance at hypersonic speeds, ultimately culminating in its first orbital-velocity reentries.