While bittersweet for those that have closely followed the vessel’s development and many attempted Falcon fairing recoveries, this move should ultimately give Mr. Steven around three times as many opportunities to attempt fairing recoveries thanks to SpaceX’s significantly higher East Coast launch cadence.

Under SpaceX lease since late 2017, the company moved the vessel to California and modified it with its first net and set of arms around December 2017. Mr. Steven attempted his first Falcon fairing catch – each half worth more than $3M – in February 2018 after the launch of Earth imaging satellite PAZ and two SpaceX Starlink prototypes, thus beginning a string of five unsuccessful recovery attempts for West Coast Falcon 9 launches. The lack of success has most certainly not been for a lack of trying, exemplified in large part by Mr. Steven’s frequent net and arm upgrades over the last year, culminating in the installation of four massive arms, a vast primary net, and a smaller secondary net below it.

SpaceX engineers and technicians repeatedly managed to get Falcon fairing halves – autonomously guided by GPS after deploying parafoils – within 50 to a few hundred feet during several of those five post-launch attempts. In the last few months of 2018, SpaceX also began a program of controlled fairing drop tests, where a helicopter would lift a fairing half 5,000-10,000 feet up before releasing it for Mr. Steven. A recent drop test organized in either late-December or early-January saw the parasailing fairing half get so close to a successful catch that its parafoil rigging actually appeared to get tangled on (or at least bump) the edge of Mr. Steven’s net, spanning an area of around 3000 square meters (~30,000 sq ft).

Barring a continuation of SpaceX’s helicopter drop test program on the East Coast, Mr. Steven’s final controlled fairing recovery attempt occurred on January 25th, perhaps less than four days before the ship departed for Florida. After maneuvering wildly and reaching 28 mph (45 km/h) – the fastest speed yet clocked – on his trip back to port, Mr. Steven arrived with a fairing half tantalizingly cradled in the ship’s new secondary net, a perfectly ambiguous state that could indicate a successful catch and net transfer or a missed catch and ocean retrieval, with the smaller net used as an ad-hoc shock absorber during his sprint to port. 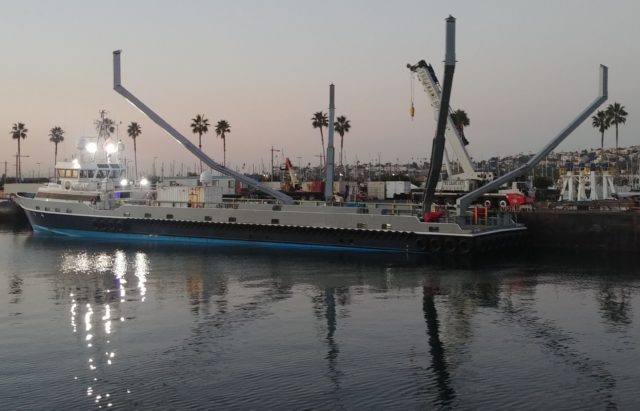 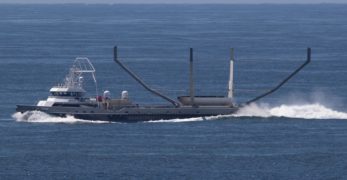 Not nearly enough net, as it turned out. (Pauline Acalin, May 2018) 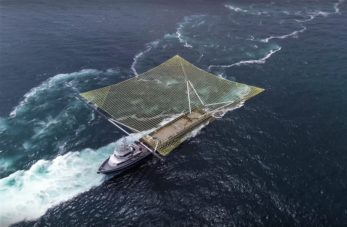 Mr Steven testing his new net in a series of sea trials, July 11

Mr. Steven returned to Port of San Pedro around on October 8th after a day spent at sea, apparently with a Falcon fairing half in tow. This is the second known time that a fairing has been in Mr. Steven’s net. The fairing was eventually lifted off around noon the following day. (Pauline Acalin)

Mr. Steven was captured performing tests with a duo of fairings and nets at its Port of LA berth, January 22nd. (Pauline Acalin)

Back to Port Canaveral

Prior to Mr. Steven’s California station and arm/net upgrade, the vessel was introduced to SpaceX in Florida as a sort of faster version of the slower service vessels already used to support drone ship deployments and recover fairing halves (or shards) out of the ocean. Although it remains entirely possible that Mr. Steven’s abrupt journey towards southern Mexico is a false alarm, it appears quite likely that the vessel will ultimately end up back where it started its SpaceX journey. After returning to Port Canaveral, Mr. Steven should be able to support a range of post-launch fairing recovery attempts thanks to SpaceX’s consistently-busy East Coast launch schedule.

At his current cruising speed of ~18 knots (21 mph/35 km/h), Mr. Steven will take at least 9-10 days (~220-240 hours) to travel the ~7500 km (4600 mi) of ocean separating Port of LA and Port Canaveral. Even assuming many lengthy stops for fuel and supplies, the vessel should easily arrive in time to attempt its first East Coast fairing catch in support of SpaceX’s next launch, NET February 18th. After that, Crew Dragon’s inaugural orbital launch (DM-1) is targeted for late February, followed by Cargo Dragon’s 17th operational mission (NET March 16th) and the second-ever launch of Falcon Heavy, absolutely no earlier than March 7th.

Mr. Steven appears to have quietly departed Port of Los Angeles for Manzanillo, a port on the southwest coast of Mexico. This is likely Leg #1 of a voyage to Port Canaveral, where he can support #SpaceX's more frequent Florida launches. He'll be missed on the West Coast 🙁 pic.twitter.com/Jb5cOA2Cda