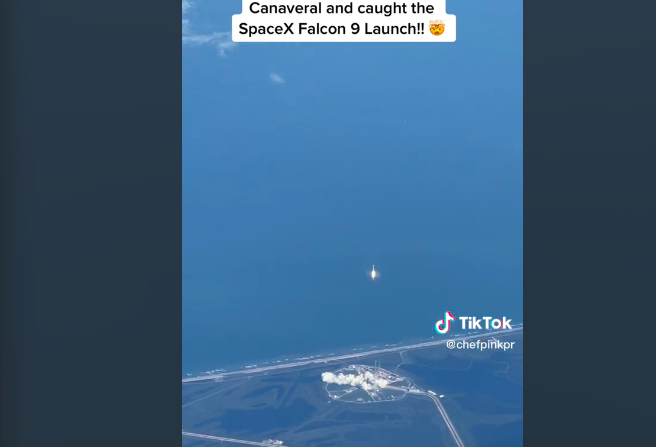 A flight crew member captured a video of a SpaceX Falcon 9 launching from Cape Canaveral, Florida, from the air. TikTok user @chefpinkpr shared the video to the platform while noting that he and his fellow crew members witnessed “this once-in-a-lifetime phenomenon.”

“My plan flew by Cape Canaveral and caught the SpaceX Falcon 9 Launch!!” he wrote.

“Oh, there it goes! The smoke’s billowing,” one of the crew members said in the video, which captures two voices.

“Oh wow, this is unbelievable.”

“What are the chances of this?”

“This is the coolest thing I’ve ever seen on a plane,” he said in the video.

In the background, you can hear, “Ladies and gentlemen, we have liftoff,” being announced.

A quick glance through the comments proved to be interesting. One commenter, Susie Rice, said that as she watched the launch nearby, she saw the plan and noted said, “wow, the view they must have!”

Teslarati reached out to @chefpinkpr for a comment, and we’ll update you if/when we receive a response. You can watch his video below or click here if it doesn’t load.