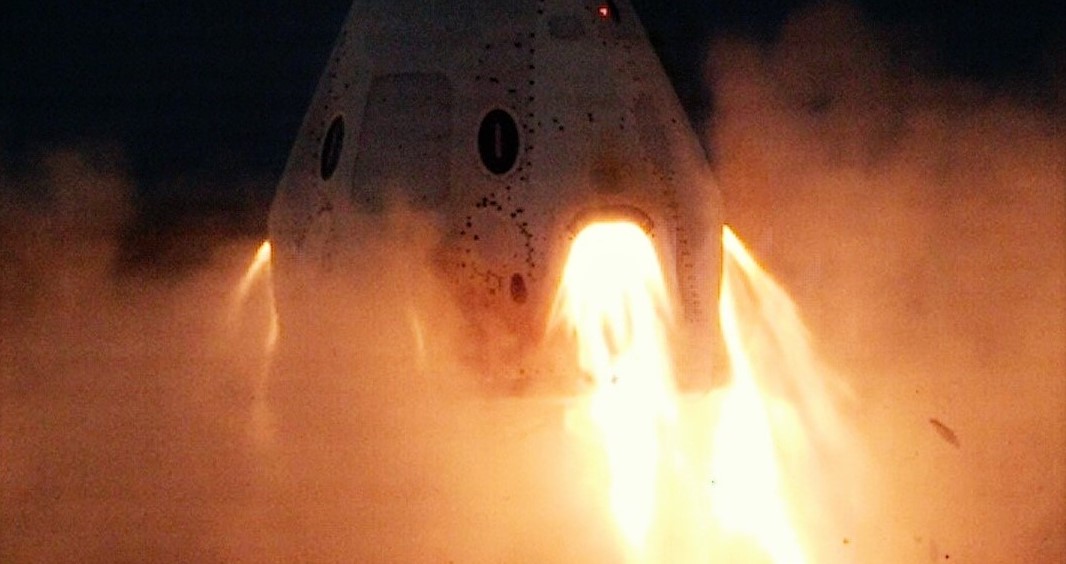 On November 13th, SpaceX revealed that a planned static fire test of a Crew Dragon’s powerful abort thrusters was completed without issue, a strong sign that the company has successfully redesigned the spacecraft to prevent a catastrophic April 2019 explosion from reoccurring.

Pending a far more extensive analysis, Wednesday’s static fire should leave SpaceX on track to perform Crew Dragon’s next major flight test before the end of 2019.

In an unexpected flourish of transparency, SpaceX and NASA published photos of the Crew Dragon capsule’s static fire test just a few hours after it was completed, an excellent sign that the ‘quick-look’ data analysis immediately following the test was extremely positive. Spaceflight Now was first to visually confirm that the test had occurred, publishing a photo that revealed a whitish cloud of smoke produced by the static fire around 3:15 pm EST (20:15 UTC).

Had a failure similar to the April 2019 explosion occurred, that cloud would have likely been tinged red by unburnt dinitrogen tetroxide (NTO) oxidizer, and the different appearance of November 13th’s exhaust cloud was seen as the first tentative sign that this static fire had gone more successfully.

Alongside photos of the SuperDraco thruster test published by NASA and SpaceX shortly after its conclusion, SpaceX confirmed that the test was completed without issue. Regardless of whether everything performed exactly as intended, this means that factory-fresh Crew Dragon capsule C205 made it through the test unscathed, likely securing SpaceX and NASA a large volume of uninterrupted telemetry data, as well as the hardware itself.

Just hours after C205’s static fire was completed, NASA published a detailed update, confirming that the tests were finished without any immediately apparent issues.

NASA described the test in much more detail than SpaceX, noting that it began with the ignition of two of Crew Dragon’s 16 Draco maneuvering thrusters, each performing two one-second burns. C205’s eight SuperDraco abort thrusters subsequently ignited and burned for a total of ~9 seconds to simulate required abort performance, followed by the reignition of two Draco thrusters immediately after SuperDraco cutoff.

Each capable of producing several dozen pounds of thrust, both Crew and Cargo Dragon use Draco thrusters to orient themselves in orbit, rendezvous with the International Space Station, and lower their orbits to reenter Earth’s atmosphere. Crew Dragon’s Draco thrusters are also designed to control its attitude during abort scenarios, stabilizing and flipping the spacecraft to prevent a loss of control and ensure proper orientation during emergency parachute deployment. The Draco firings during Crew Dragon’s November 13th static fire were meant to simulate that additional use-case.

Aside from verifying that SpaceX has successfully redesigned Crew Dragon to mitigate the failure mode that caused capsule C201’s catastrophic explosion in April 2019, the Draco static fires specifically mirrored the burns Crew Dragon C205 will need to perform to successfully complete its In-Flight Abort (IFA) test. As noted by NASA and SpaceX, with the static fire complete, both teams will now comb through the data produced, inspect Crew Dragon to verify its health and the performance of its redesigned high-flow pressurization system, and perform any necessary refurbishment.

NASA’s post on Crew Dragon’s static fire revealed another thoroughly intriguing detail: the SpaceX spacecraft’s SuperDraco thrusters apparently have flaps! A bit of retroactive speculation suggests that SuperDracos are closed out with plugs of some sort to create a seal against the environment before Crew Dragon is rolled out to the launch pad. Perhaps, in the event of a SuperDraco ignition, SpaceX included actuating flaps as a method of resealing those thrusters prior to splashdown in the Atlantic Ocean.

“Immediately after the SuperDracos shut down, two Dracos thrusters fired and all eight SuperDraco flaps closed, mimicking the sequence required to reorient the spacecraft in-flight to a parachute deploy attitude and close the flaps prior to reentry. The full sequence, from SuperDraco startup to flap closure, spanned approximately 70 seconds.”

Given that the obvious utility of those flaps appears to be extremely limited and their associated actuators have to survive the 9+ consecutive seconds of hellish conditions in the event of an actual abort, it seems like an excessively complicated system to include on Crew Dragon. Nevertheless, the ability to guarantee that SuperDracos are water-sealed before splashdown would almost without a doubt make Crew Dragon far easier to refurbish and reuse.

The SuperDraco flaps may also be a holdover from before propulsive Crew Dragon landings were canceled, although the use-cases for such a system still remain unclear. The flaps’ raison d’etre could even be as simple as preventing water intrusion that might otherwise cause Dragon to sink after splashdown.

Regardless of why they exist, NASA indicates that SpaceX’s November 13th static fire proved that they worked exactly as expected, closing soon after the simulated abort burn to seal Crew Dragon against water intrusion. If NASA and SpaceX’s deep-dive inspections and data analysis uncover no red flags, it’s extremely likely that SpaceX will able to launch C205 for its In-Flight Abort test some 4-8 weeks from now.

If the IFA also goes as planned, Crew Dragon could be ready for its inaugural NASA astronaut launch as early as February or March 2020.