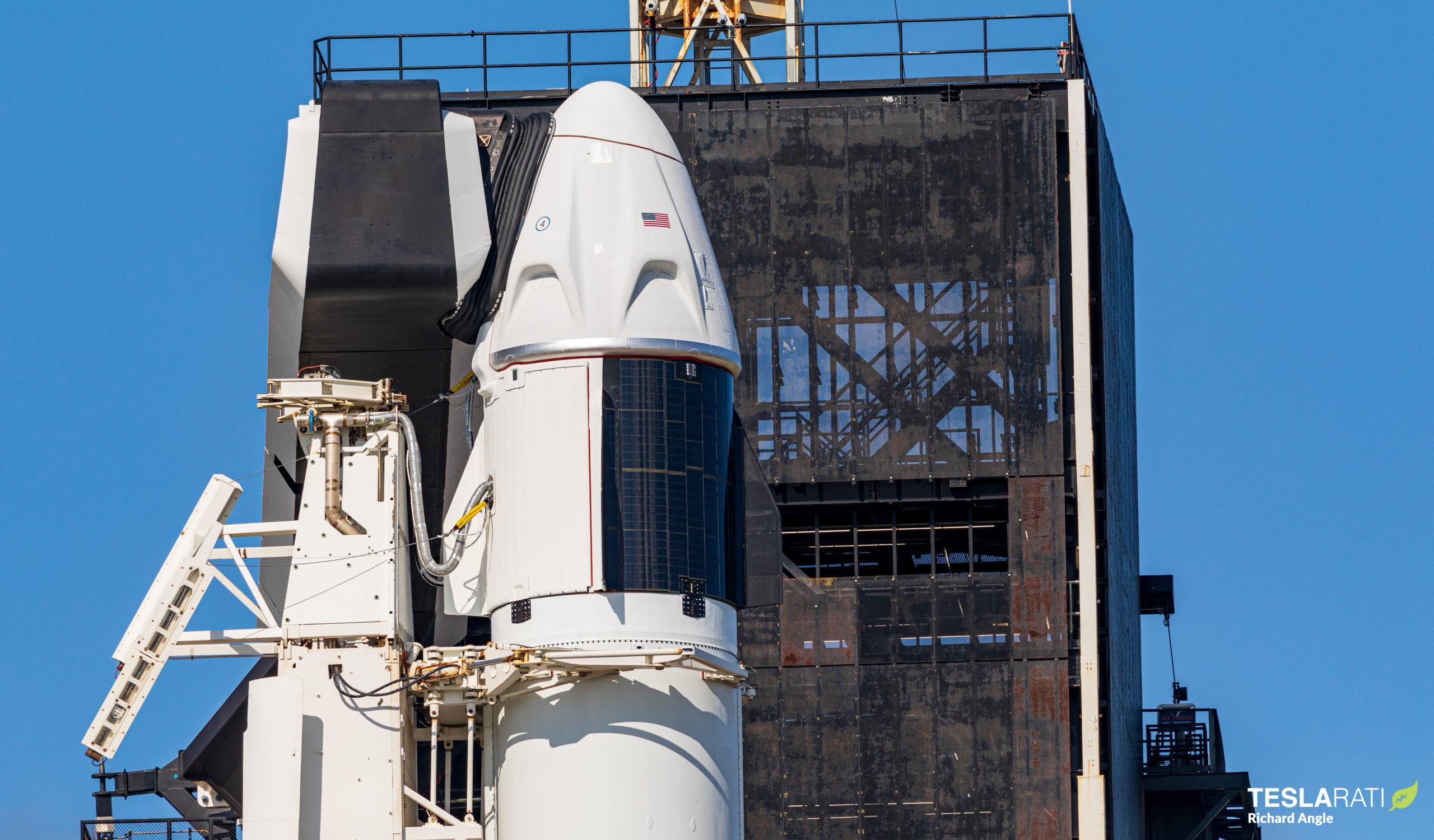 Update: SpaceX, Falcon 9, Crew Dragon, the crew, and the weather remain on track for the company’s historic Inspiration4 mission, which is set to become the first dedicated orbital space tourism launch in history.

SpaceX has begun more than four hours of live coverage for the mission, which remains on track to launch no earlier than just before 8:03 pm EDT (00:03 UTC). Tune in below to watch the launch live!

In less than 12 hours, SpaceX will kick off a more than four-hour webcast covering Crew Dragon’s historic Inspiration4 mission – set to be the world’s first all-private orbital astronaut launch and the highest private citizens have ever flown.

Safely tucked inside a once-flown orbital Dragon capsule and riding on a twice-flown Falcon 9 booster, the latter a first for SpaceX, Inspiration4’s approximately five-hour launch window is scheduled to open just before 8:03 pm EDT on Wednesday, September 15th (00:03 UTC 16 Sept). Barring weather or technical delays (or clouds in general), a liftoff ~35 minutes after sunset could produce spectacular views for anyone watching from the ground as Falcon 9 and its immense exhaust plume ascend back into sunlight.

No matter the view, though, Inspiration4 will be a milestone both for SpaceX, spaceflight, and orbital tourism as a whole.

The mission will both be SpaceX’s first private astronaut launch of any kind and the first all-private orbital astronaut launch in history. In a single mission, SpaceX will singlehandedly boost the number of private astronauts that have reached orbit by 50% – a feat only eight other people have achieved. If all goes according to plan, it will also be the first time ever that private citizens have successfully flown to orbit and back on or in a flight-proven rocket or flight-proven spacecraft.

According to SpaceX, Falcon 9 will launch Crew Dragon to an apogee of around 575 km (~357 mi) – more than a third higher than the ISS, the highest humans have flown since 2009, and the highest altitude ever reached by private astronauts. With Inspiration4, SpaceX will also launch astronauts on a twice-flown Falcon 9 booster and simultaneously operate three Dragon spacecraft in orbit for the first time ever, pushing the company’s own technical abilities forward.

Despite the myriad impressive firsts Inspiration4 is set to mark, one thing is certain: it won’t be the last time private astronauts head to (real) space on a SpaceX spacecraft. Already, SpaceX has contracts from Axiom Space for four dedicated private launches to the International Space Station in 2022 and 2023, each carrying up to four private astronauts. Space Adventures – responsible for organizing all eight other non-SpaceX private orbital astronaut launches in history – also has plans to launch a private crew of four to unprecedented heights, though it’s unclear if the mission has secured any customers.

I asked about future non-government missions for SpaceX:

Reed says “the Dragon manifest is getting busier by the minute” with “a growing backlog of commercial astronaut missions.”

Reed says SpaceX is “gearing up” to be able to fly 4-6 Dragon missions per year at minimum.

In an official Q&A held on Tuesday, Benji Reed – SpaceX director of Dragon mission management – said that the company’s “Dragon manifest is getting busier by the minute” with “a growing backlog of commercial astronaut mission.” Reed also expects SpaceX to soon be capable of a minimum of 4-6 Dragon launches annually. Axiom-1, the first fully private astronaut mission to the International Space Station (ISS), is scheduled to launch no earlier than January 2022.

As for Inspiration4, Jared Isaacman, Sian Proctor, Haley Arceneaux, and Chris Sembroski will spend a bit less than three days in orbit and are expected to perform a few small science experiments, take plenty of photos, and host a couple live events over the course of the mission. They’ll also get to take advantage of Crew Dragon’s ‘cupola’ – designed specifically by SpaceX for Inspiration4 and set to be the largest window ever flown in space. A small camera inside the nosecone that will protect that window during ascent and reentry will hopefully allow the crew to take self-portraits with Earth as a spectacular backdrop.

If all goes according to plan, Dragon will reenter and return its private astronauts to Earth around 7pm EDT on Saturday, September 18th. SpaceX is expected to provide live coverage of Inspiration4’s launch and reentry and the launch webcast will begin around 4pm EDT (20:00 UTC), four hours before liftoff.