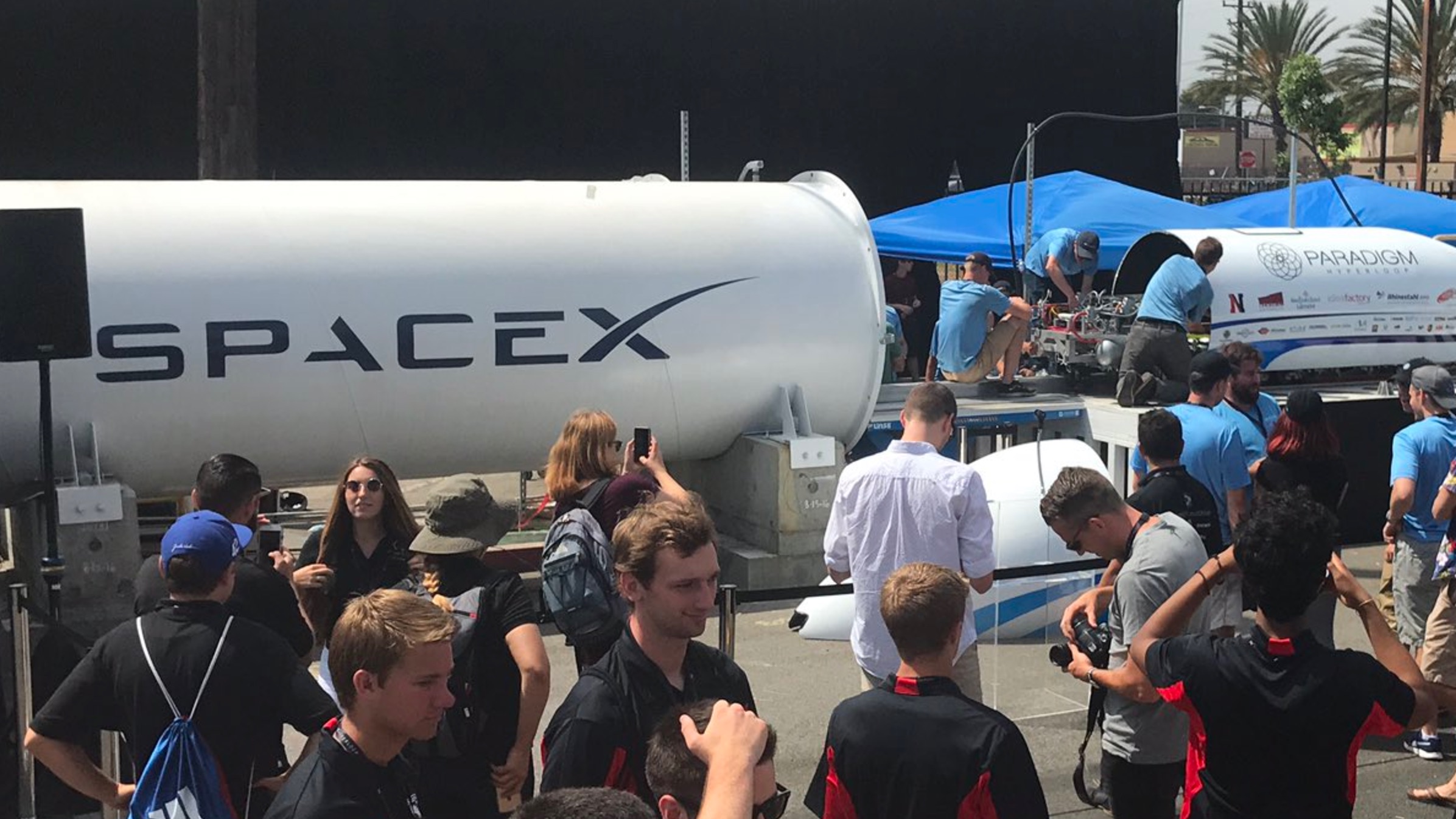 Hawthorne councilmembers, members of the California Assembly, and Hawthorne Mayor Alex Vargas were in attendance at the headquarters of SpaceX and The Boring Company for their jointly-hosted Hyperloop Competition 2.

The second such Hyperloop competition sponsored by Elon Musk, the eight months that separated them were filled to the brim with press coverage of The Boring Company (TBC), which has begun to seriously develop an experimental tunnel beneath a central street in Hawthorne, CA. Most intriguingly, TBC publicly acknowledged that it is now pursuing the development of its own form of Hyperloop technology, originally developed and released as a white paper by Elon Musk, albeit with tunnels rather than above-ground vacuum tube constructs.

Update: Watch Elon Musk award this team for having the fastest Hyperloop pod at 202 mph

The second competition was focused on one goal, above all others: top speed. The final three teams chosen for testing in SpaceX’s mile-long vacuum tube were as international as ever. Paradigm Hyperloop, a continuation of the Openloop team from Competition 1, is composed of 26 students from the northeastern U.S. and Canada, designed a pod that made use of air bearings to levitate and was intended to travel as fast as 200 mph through SpaceX’s test track. While not yet officially confirmed, a livestream suggested that their pod reached a maximum speed of approximately 100 km/h or 62 mph. While nowhere near its purported top speed, a member of Paradigm Hyperloop said that the team’s pod “levitated perfectly” and that the test generally went great. Their pod was one of the largest, weighing in at almost a metric ton.

SwissLoop, a team of 40 or so students from Swiss university ETH Zurich, developed a pod that levitated with permanent magnets and was propelled by compressed air, sort of like a rocket. SwissLoop’s SpaceX adviser, a mechanical engineer focused on reusing Falcon 9s on normal days, praised the group’s engineering and construction of the pod during a livestream on Facebook. SwissLoop experienced some technical difficulties while Musk waiting to provide the countdown in Swiss German, and he quipped about connectivity issues that the team was having with their pod. Musk later announced that due to those technical difficulties, SwissLoop’s pod would be removed for troubleshooting and WARR Hyperloop would conduct the second live test.

WARR Hyperloop, the victors of the first Competition, prepared their Pod ii to be tested on Sunday afternoon. One of the smallest pods at only 190 lb, the vehicle was intended to have a top speed of approximately 225 mph – a speed it was reported to be capable of reaching in 12 seconds. Designed by students from the Technical University of Munich, the pod was propelled with a 50 kW electric motor connected to polyurethane wheels. While the method of levitation was not specified, it is understood to be a system of permanent magnets similar to SwissLoop’s implementation. WARR is a German organization and stands for Scientific Workgroup for Rocketry and Spaceflight in English.

Elon Musk somewhat controversially revealed that The Boring Company had received “verbal approval” for an underground Hyperloop between Washington D.C. and New York City, appearing to acknowledge some form of back-room deal with the federal government. He later clarified in a series of tweets and replies that the approval was extremely preliminary and unofficial and that The Boring Company was hard at work beginning to form relationships with the numerous municipalities that would be involved along the proposed route. The several Hyperloop-related companies that formed following Musk’s white paper have been reluctant to make room for a new, Musk-headed competitor in the ring, but The Boring Company is aggressively pushing ahead with their demonstration tunnel in Hawthorne, CA and has successfully applied for the initial permits that will be required.

Mirroring Elon’s typically positive opinion of competition, he bid Hyperloop One and all other companies trying to revolutionize transportation the best of luck during Competition 2. Competition 2 is guaranteed to provide SpaceX and The Boring Company an inside glance at some of the best emerging engineering talent. Hosting the competition is quite possibly the most suave and effective method of recruitment one can readily imagine, with all promising teams generally being given private tours of both The Boring Company and SpaceX facilities.

Meanwhile, stay tuned for the two max speed pod tests to come later this afternoon. There is no live coverage from SpaceX itself, but SwissLoop has been kind enough to livestream several of the main events on their Facebook page. You can also follow a live Facebook stream here. Follow along live there and check back at Teslarati for coverage of the events!