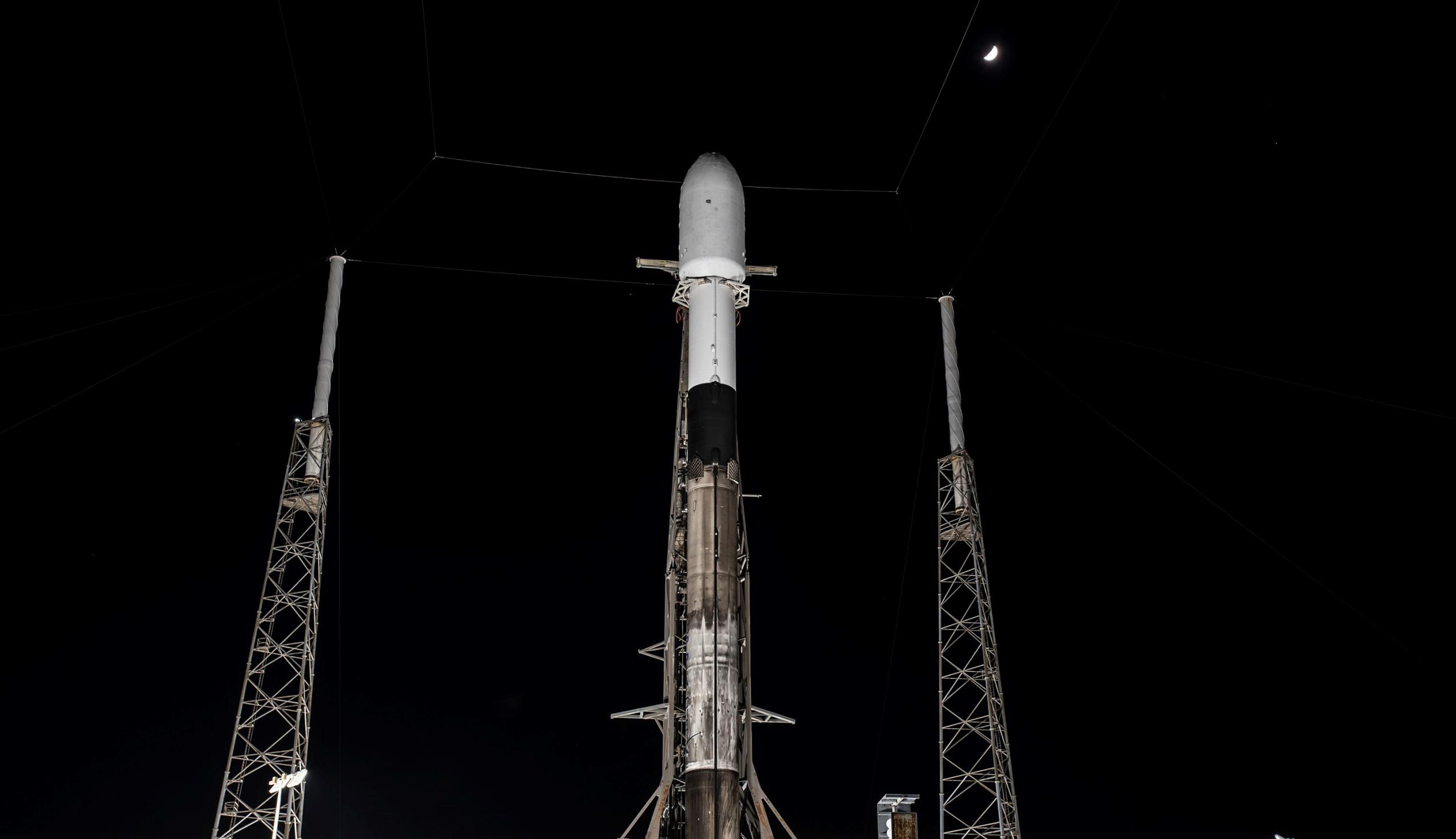 Update: After indefinitely delaying ispace’s first Moon lander launch on November 30th to fix unspecified issues with its Falcon 9 rocket, multiple sources indicate that SpaceX has put the mission back on its calendar.

Barring additional issues, the private HAKUTO-R Moon lander is now scheduled to lift off from SpaceX’s Cape Canaveral Space Force Station (CCSFS) LC-40 pad no earlier than (NET) 3:04 am EST (08:04 UTC) on Wednesday, December 7th. The mission’s quick return after just a few days of rework is a good sign that the issue that forced SpaceX to stand down was relatively minor. Simultaneously, SpaceX is moving ahead with plans to launch its first mission for OneWeb – a low Earth orbit satellite Internet provider competing directly with Starlink – less than ten hours prior, at 5:37 pm EST (22:37 UTC) on December 6th.

SpaceX support ship Doug departed Florida’s Port Canaveral on the afternoon of December 4th, likely en route to recover Falcon 9’s payload fairing after its first OneWeb launch. If SpaceX is, in fact, working towards a December 7th launch of HAKUTO-R, twin support ship Bob will likely also head to sea within the next 24 hours.

The mission will be the third Moon launch from US soil in less than four months after SpaceX’s successful launch of the South Korean Pathfinder Lunar Orbiter (KPLO) in August and the debut of NASA’s Space Launch System (SLS) rocket earlier this month. Perhaps more importantly, ispace has the opportunity to become the first company in history to successfully land a privately-developed spacecraft on the Moon, a milestone that would arguably mark the start of a new era of lunar exploration.

ispace’s first HAKUTO-R Moon lander is expected to weigh approximately 1050 kilograms (~2300 lb) at liftoff and is designed to land up to 30 kilograms (~66 lb) of cargo on the lunar surface. The lander is made by several commercial partners: ispace has provided most of its design and structures, but Europe’s ArianeGroup supplied all of HAKUTO-R’s engines, plumbing, and propulsion hardware and was responsible for most of the final assembly process.

Because of ArianeGroup’s involvement, it’s likely that HAKUTO-R shares direct heritage with the European Service Module currently powering NASA’s Orion spacecraft on its first mission to the Moon. It also arguably makes the mission more of a collaboration between Europe and Japan than an exclusively Japanese mission, though HAKUTO-R will still technically be Japan’s first private mission to the Moon.

If successful, it could also become the first privately-funded Moon landing in history. But HAKUTO-R can’t claim to be the first private Moon landing attempt, a title held by Israeli company SpaceIL’s ill-fated Beresheet Moon lander. Launched by SpaceX as a rideshare passenger sitting on top of an Indonesian communications satellite, Beresheet propelled itself all the way from geostationary transfer orbit to lunar orbit over the course of about six weeks. Just a minute or so before touchdown, a manual command inadvertently shut down the spacecraft’s propulsion, causing it to impact the surface of the Moon at ~500 kilometers per hour (310 mph) – less than 8% away from a soft landing.

In September 2019, just five months later, India’s first nationally developed Moon lander got even closer to a successful landing, losing control at a velocity of just 210 km/h (~130 mph) and an altitude of 330 meters (1080 ft). Since the Soviet Union’s 1976 Luna-26 mission, only China’s national space agency (CNSA) has successfully landed on the Moon, completing three landings between 2013 and 2020. The last successful Western Moon landing (Apollo 17; also the last crewed Moon landing) occurred in 1972.

ispace’s ultimate goal is to help facilitate the creation of infrastructure capable of supporting a permanent population of 1000 people on the Moon by 2040. The Japanese startup has privately raised $210 million since it was founded in 2010. In 2022, it won a $73M NASA contract to develop a much larger SERIES-2 vehicle capable of sending either “500 kilograms to the [lunar] surface or as much as 2000 kilograms to lunar orbit.” SERIES-2 will be developed out of ispace’s US branch instead of its Japanese headquarters.

In addition to HAKUTO-R, SpaceX’s Falcon 9 rocket will simultaneously launch the NASA Jet Propulsion Laboratory’s (JPL) Lunar Flashflight ice surveyor as a rideshare payload. After launch, Lunar Flashlight will attempt to enter an elliptical lunar orbit and use an infrared laser to (invisibly) illuminate the surface of craters that have been in shadow for millions of years. The way the surface reflects that laser light will allow the spacecraft to prospect for water ice deposits that could one day be mined and converted into rocket propellant.

Tune in below around 3:20 am EST (08:25 UTC) on Thursday, December 1st to watch SpaceX launch Japan’s first privately-developed Moon lander.