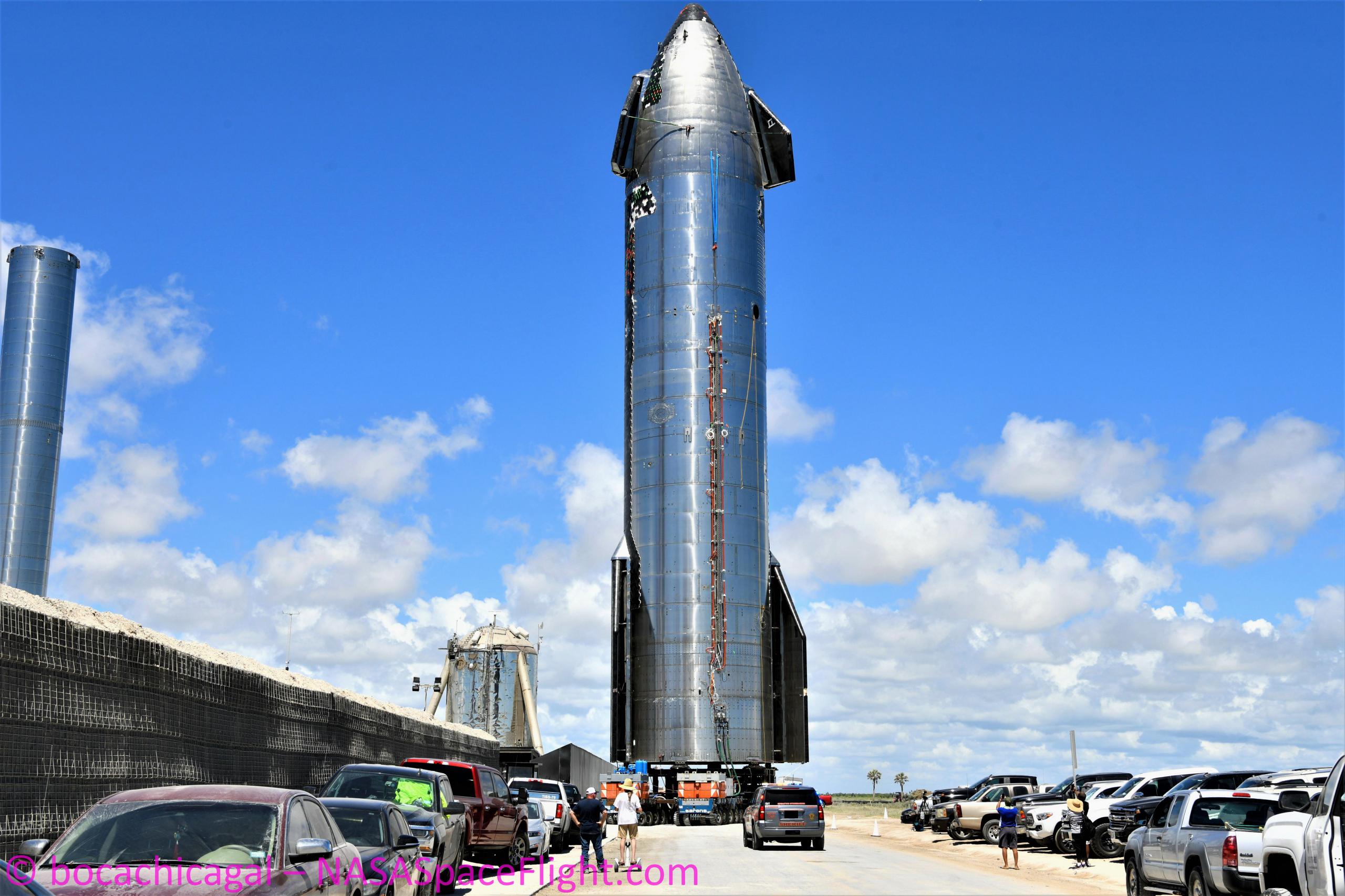 Several days after SpaceX’s first orbital-class Starship prototype took a second trip to a nearby launch site, the rocket is on its way to one of two suborbital launch mounts.

Once installed on the steel structure, Starship prototype 20 (S20) will finally be ready for – at minimum – two crucial tests: a cryogenic proof and static fire. According to highway closures filed by SpaceX late last week, the first of those tests could apparently begin as early as Thursday, August 19th, potentially setting Starship S20 up to attempt at least one major milestone next week.

On August 13th, SpaceX rolled Starship S20 back to the launch site a week after the rocket was sent to the pad to be briefly stacked on top of a Super Heavy booster – an event that appears to have been something like 50% photo opportunity, 50% test objective. Neither the booster or ship were fully complete at the time and both ultimately required at least another week or two of outfitting and plumbing to be ready for ground testing – let alone flight. Aspirationally, the same pair – Ship 20 and Booster 4 – could be the first to attempt a true orbital Starship launch sometime later this year.

Since its second rollout, Ship 20 has more or less stayed in one place as workers continuously swarmed about the rocket on boom and scissor lifts. Over the last four days, not much has visually changed save for the installation of a handful of heat shield tiles, but the focus clearly centered around the Starship’s ‘raceway’ – a clutch of plumbing and wiring that runs most of the length of the vehicle’s back. Virtually all rockets have them and Starship is no different with a raceway packed with avionics wire runs, plumbing for propellant loading, and smaller lines for pressurization and hydraulics.

While it’s not entirely clear what specific work has been done over the last few days or why it wasn’t done back at the build site, where CEO Elon Musk himself has said such tasks are more easily done, it’s clear that Starship S20 does have a more refined raceway than any ship before it. In recent days, SpaceX has also begun to install structural elements that strongly imply that S20 will be the first Starship to receive a raceway aerocover – not unlike those on Falcon boosters – to protect its external wiring and plumbing in flight.

Regardless, once Starship S20 is installed on one of SpaceX’s two suborbital launch mounts, the vehicle will most likely be prepared for a routine cryogenic proof test. To pass, Starship will need to survive significant thermal and mechanical stress as its tanks are filled with supercool liquid nitrogen and pressurized to at least 6 bar (~90 psi). At this point, a Starship prototype hasn’t failed a cryo proof in more than a year, so the test should be fairly routine.

Curiously, after spending weeks modifying Mount B with a series of hydraulic rams meant to simulate the thrust of Ship 20’s six Raptor engines during its cryo proof(s), SpaceX removed all of that extra hardware just prior to the Starship’s second rollout and now-imminent installation on said mount. Regardless of why, that decision likely means that Starship S20 will move directly to static fire testing once it passes cryo proofing. Given that Ship 20 appears to be on track to be the first Starship prototype of any kind to fire more than three Raptors at a time, that static fire campaign will likely be somewhat cautious, possibly beginning with just 1-3 engines and then moving to four, five, or straight to six.

SpaceX could also throw caution to the wind (not implausible as evidenced by the removal of Pad B’s unused thrust rams) and install and attempt to fire all six Raptors immediately after Ship 20 completes a cryo proof. Based on road closures filed by SpaceX, that testing could begin as early as 5pm to 11pm CDT on Thursday, August 19th. A backup window is also scheduled from 6am to 12pm CDT on August 20th.