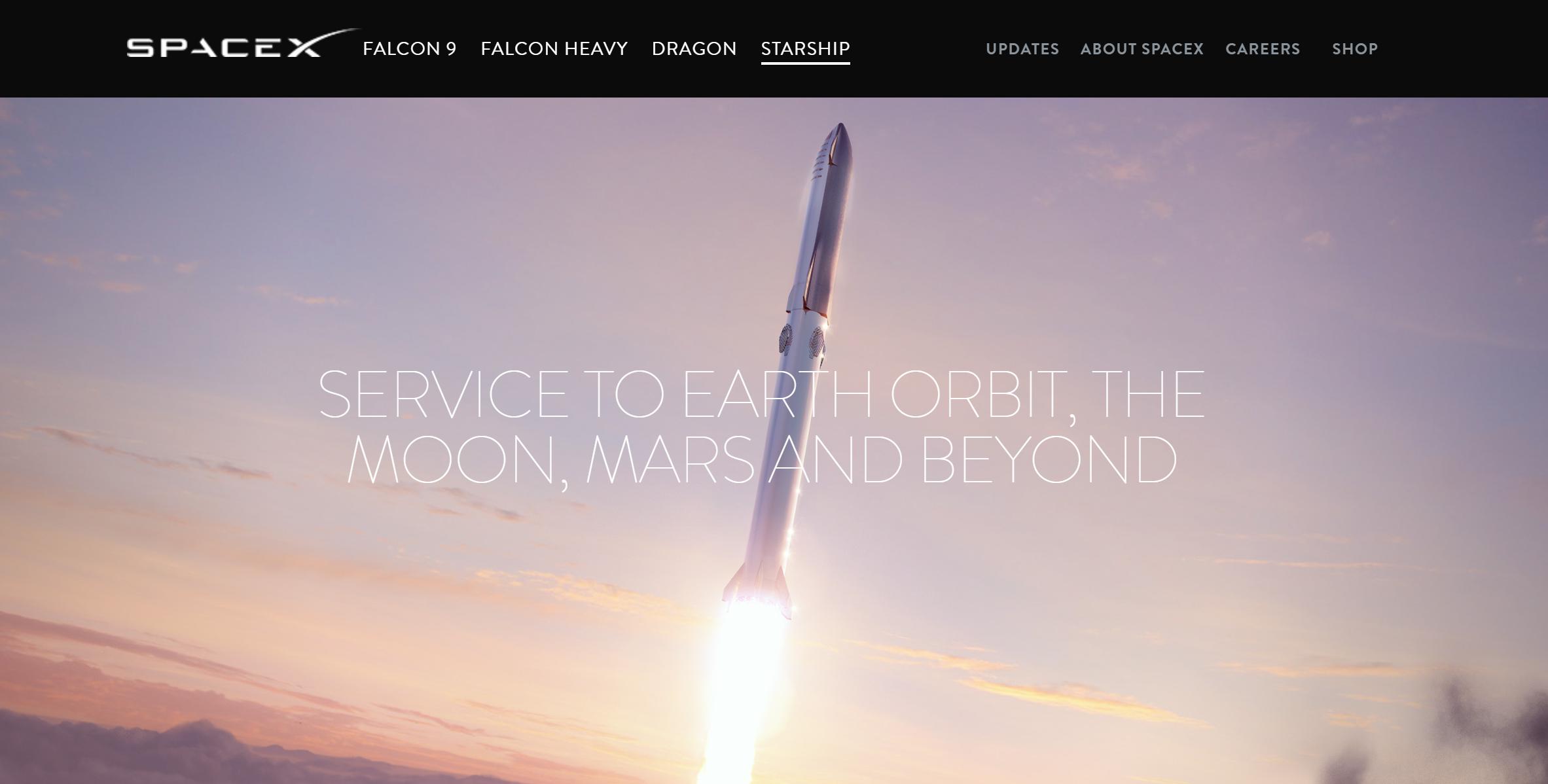 Shortly after CEO Elon Musk’s 2019 presentation, SpaceX has published a new webpage dedicated to the next-generation Starship launch vehicle and its Super Heavy booster, detailing the rocket and providing some excellent new images and renders.

Beyond the images of Raptor and renders of Starship and Super Heavy, the webpage discusses several possible use-cases in Earth orbit and throughout the solar system, showing off the latest iteration of a cargo-focused Starship and teasing possible missions to the Space Station.

Known informally as “Chomper” in the spaceflight community, a cargo-optimized Starship would replace the pressurized crew section with a vast cargo bay and actuating door, the source of its nickname. Similar to but slightly simpler than the Space Shuttle’s famous clamshell doors, such a nose could be extremely useful. Although it could obviously be used to place massive payloads in orbit, a sealable cargo section could also be used to grab similarly large items on orbit and then either return them to Earth or service/repair them in situ.

Of note, NASA’s Goddard Space Flight Center (GSFC) – responsible for the proposed LUVOIR super-telescope – has already seriously begun considering a cargo-optimized Starship as one of a handful of possible launch options. In the event that LUVOIR is chosen for development by NASA, the massive space telescope could be ready for launch sometime in the 2030s, at which point GSFC believes there will be only three plausible options – NASA’s SLS, Blue Origin’s New Glenn, or SpaceX’s Starship.

According to LUVOIR’s extensively detailed “Final Report”, published less than a month ago, GSFC worked fairly closely with SpaceX to determine where exactly Starship might fit into the picture. Intriguingly, an April 2019 tweet from the Center revealed that SpaceX had verified that Starship would be able to launch LUVOIR-B, a smaller and simpler version of the telescope. The August 2019 report, however, reveals that Starship could also launch LUVOIR-A – the full-sized telescope – with just a few slight modifications to Starship’s payload section.

SpaceX acknowledged Starship’s already well-known potential for transporting cargo and crew to the Moon and Mars, but also noted that the massive spacecraft could be used to deliver cargo and crew to the International Space Station (ISS) or elsewhere in Earth orbit. The ISS is undeniably large but Starship is (relatively) even bigger, nominally featuring enough pressurized volume (~1000m3 vs ~910m3) to more than double the habitable capacity of the ISS upon arrival. CEO Elon Musk noted this in an offhand remark on September 28th, cognizant of the fact that a Starship on its own is effectively a reusable ISS-class space station that can be placed in orbit with a single launch.

If a given Starship can support a crew of astronauts over a multi-month interplanetary cruise, the same Starship can also – and probably even more easily so – serve as an all-in-one space station with months of longevity. Add in Starship-enabled resupply and refueling runs and SpaceX could likely sustain a fleet of autonomous space stations in Earth orbit with relative ease. Assuming SpaceX is interested, Starship launch prices are low enough, and a large enough market exists, Starship could almost instantly and singlehandedly take orbital tourism from a distant fantasy for billionaires to a serious market potentially accessible to hundreds of thousands or even millions of people.

Musk has noted in previous SpaceX presentations that the goal is to make Starship so reusable that the price of per-person tickets to Mars becomes comparable to buying a house ($500k to $1m). Assuming SpaceX gets close to that price target, the cost of a 100-person mission low Earth orbit – likely requiring just one launch – could potentially be comparable to buying a car (~$50,000).