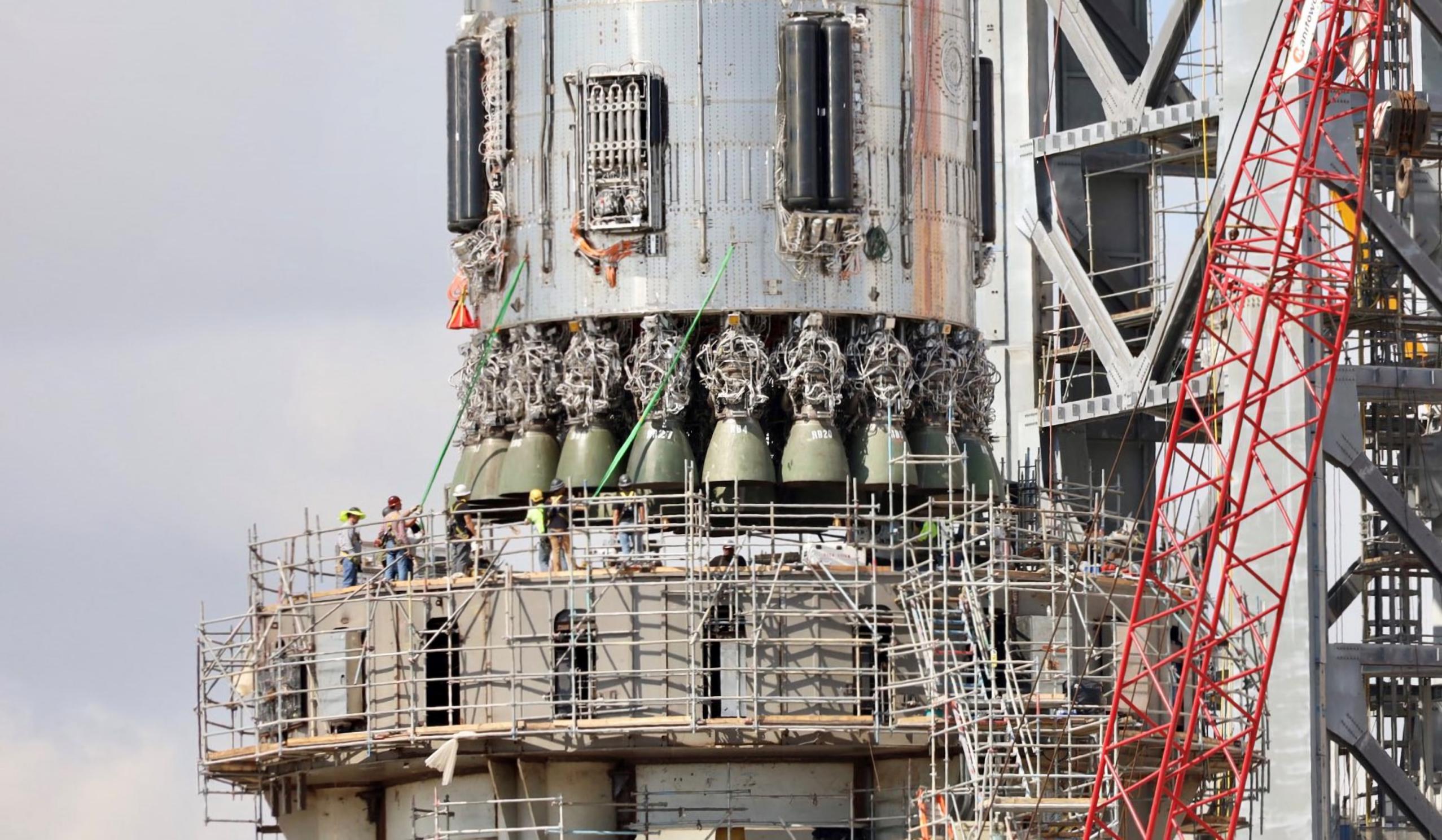 Super Heavy B4. The orbital launch mount. Round 2. (@SPadre)

Update: In response to this article, SpaceX CEO Elon Musk says that the plan is to not only ‘cryoproof’ the first flightworthy Super Heavy – but to static fire the booster and shake down Starship’s brand new orbital launch complex as early as “next week.”

A lot of work would need to be finished – and all of it smoothly – for an orbital launch pad cryoproof and static fire to be possible just a week or less from now but Musk’s response nevertheless provides invaluable context for SpaceX’s near-term plans and confirms that Super Heavy Booster 4 is ready for integrated testing as-is. Further, Musk’s tweet implies – as speculated – that Starbase’s orbital launch complex tank farm is much closer to test-readiness than it might otherwise appear.

Both Super Heavy Booster 4 (B4) and the launch mount have undergone substantial changes since they last parted ways four weeks ago. SpaceX teams have been laser-focused on installing the vast array of plumbing, wiring, and components required to turn the hulking steel structures into functional launch facilities and the largest flightworthy rocket and both certainly look the part.

Unlike Starship, which has an expansive skirt section perfect for stowing away sensitive plumbing and avionics, Super Heavy has an unusually short interstage and no real skirt, meaning that all the extra hardware SpaceX has installed over the last month or so is impossible to hide. Indeed, when Booster 4 rolled out of Starbase’s high bay for the second time on September 8th, the rocket was blanketed by dozens of new valves, thousands of feet of wiring and plumbing, pressure vessels, multiple hydraulic racks, a ‘quick disconnect’ (QD) umbilical panel for interfacing with the launch pad, places for “flight termination system” (FTS) explosive charges to be installed, and much, much more.

Additionally, Super Heavy B4’s second batch of 29 Raptors – installed in late August – also appear to all have outward-facing umbilical panels that will all the booster to receive some level of assistance from ground systems while igniting those engines. It’s unclear what exactly they’ll do but it’s likely that those engine umbilical will connect to high-pressure gas systems on the ground, presumably minimizing the already absurd amount of COPVs and secondary plumbing present on Super Heavy.

However, Super Heavy will still need to be able to reignite anywhere from 1 to 13 of its 29-32 Raptor engines in flight for boostback and landing burns, potentially explaining the eight large pressure vessels and 100+ small, high-pressure gas lines installed on B4’s aft end. Super Heavy also needs to be able to chill, feed, and purge all 29-32 of its Raptor engines, guaranteeing that Starship’s booster plumbing situation was going to be immensely complex no matter the approach SpaceX took.

In addition to Super Heavy B4’s newfound complexity, SpaceX also spent the last four or so weeks outfitting Starbase’s orbital launch mount’ with all the plumbing, power, avionics, and mechanical systems it will need to function as “Stage Zero” of orbital-class, two-stage Starship rockets. SpaceX has installed most of the secondary quick disconnect structures that will connect to and feed each of Super Heavy’s 20 outer Raptor engines. The main Super Heavy quick disconnect device was also installed and a team has been gradually outfitting and connecting the structure to the plumbing, avionics, and power it will provide boosters.

A significant amount of work still remains to connect the orbital launch mount to SpaceX’s incomplete and custom-built orbital tank farm, which will store, supercool, and feed the pad, Super Heavy, and Starship with several thousand metric tons of liquid and gaseous oxygen and methane. It’s difficult to say how close Starbase’s tank farm is to being able to support Starship or Super Heavy testing, which makes it equally unclear what SpaceX’s near-term plans are for Booster 4. It’s possible that the rocket has been reinstalled on the orbital launch mount as a second fit check, perhaps focused on those 20 outer Raptor quick-disconnect mechanisms.

It’s also possible that the tank farm and launch mount plumbing are much closer to completion than expected, meaning that Super Heavy B4 could remain at the orbital pad until it’s completed several crucial cryogenic proof and static fire tests. Of course, short of confirmation from Musk himself, we’ll just have to wait and see.