SpaceX CEO Elon Musk took to Twitter to reaffirm SpaceX’s commitment to developing their own technology for refueling BFR beyond Earth, noting that the high-efficiency hardware would be “critical for propellant production at Mars Base Alpha.”

Known as in-situ resource utilization (ISRU), Musk briefly commented on SpaceX’s in-house work on the tech in an October 2017 Reddit AMA (Ask Me Anything), noting that “Design is pretty far along…it’s a key part of the whole system.” His most recent tweet on June 10 reiterated ISRU’s centrality to any successful (read: sustainable) colonization of Mars, and the CEO further confirmed what was already all but guaranteed, describing a chemical reaction known as the Sabatier process.

At the most basic level, by combining heated, high-pressure carbon dioxide and hydrogen (easily derived from Mars’ CO2-rich atmosphere and wealth of water ice) and a bed of nickel or aluminum oxide, the Sabatier process can produce methane and water. Water can be easily decomposed into hydrogen and oxygen or used for drinking, cooking, and plumbing, among an infinite number of other uses. Akin to a more advanced version of what is already successfully utilized aboard the International Space Station, efficient Sabatier reactors can also be used to partially recycle wastewater and carbon dioxide (produced by humans breathing) to recover a significant fraction of pure water and methane.

In the case of SpaceX’s BFR rocket and spaceship, its propellant of choice will be liquid oxygen and methane (known as methalox) partly because of how comparatively easy it is to handle methane and to produce it on Mars, while simultaneously being a significant enabler of efficient long-term crewed spaceflight (i.e. the months-long deep space journeys to and from Mars). Less consumable mass required to keep passengers alive and happy directly translates into more payload to the surface of Mars, lowering the overall cost per kilogram delivered and thus the cost per ticket! 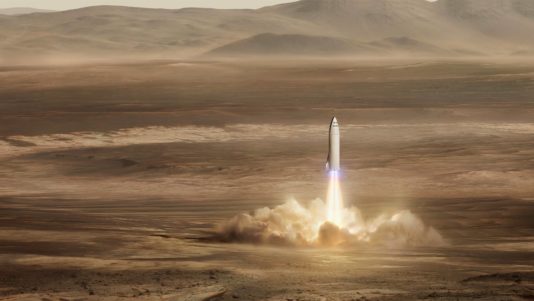 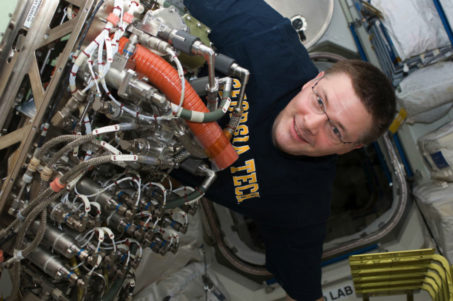 A US astronaut completes installation of the ISS’s upgraded Sabatier reactor, which helps to partially close the loop on water consumables. (NASA, 2011)

After landing on Mars, Sabatier reactors would be used to gradually refuel each Big F. Spaceship. Of course, the Sabatier process follows the laws of thermodynamics and thus requires a power source to heat the inputs, as well as cool the outputted methane and oxygen into fuel-grade cryo-cooled liquids. At least until SpaceX chooses to jump into the ring with the US nuclear (fissile) material regulation apparatus and develop or launch nuclear reactors, the most reliable power source for interplanetary colonization, that power will have to be supplied by acres upon acres of solar panels optimized to be as light, dense, and efficient as possible. If anything, the dust storm currently threatening the livelihood of Mars rover Opportunity should serve as evidence that solar power on Mars is at best a relatively cheap and simple stopgap for better power sources, especially for any long-term human presence on the Red Planet.

Optimally, BFS’ own internal solar array would (and likely will, at least at first) double as a source of power both in space and on the surface of Mars, neatly removing the need to waste precious cargo space on duplicate hardware. Even better, perhaps there is a chance that SpaceX’s materials scientists, engineers, and chemists can find ways to significantly optimize the Sabatier reaction for their specific needs, potentially lowering the energy required to get the desired end-product. It’s sort of a theme with interplanetary colonization, butttt… lower energy requirements translate to fewer solar panels needed to produce a given quantity of propellant in a set period of time, meaning that more payload can thus be dedicated to more important cargo like food, habitats, ISRU hardware, mining and tunneling machinery, and humans.

With any luck, followers of SpaceX may get an update on the company’s BFR plans later this year, likely just before or immediately after the first prototype spaceship is shipped to Texas for acceptance testing and a Grasshopper-style program of suborbital hops.