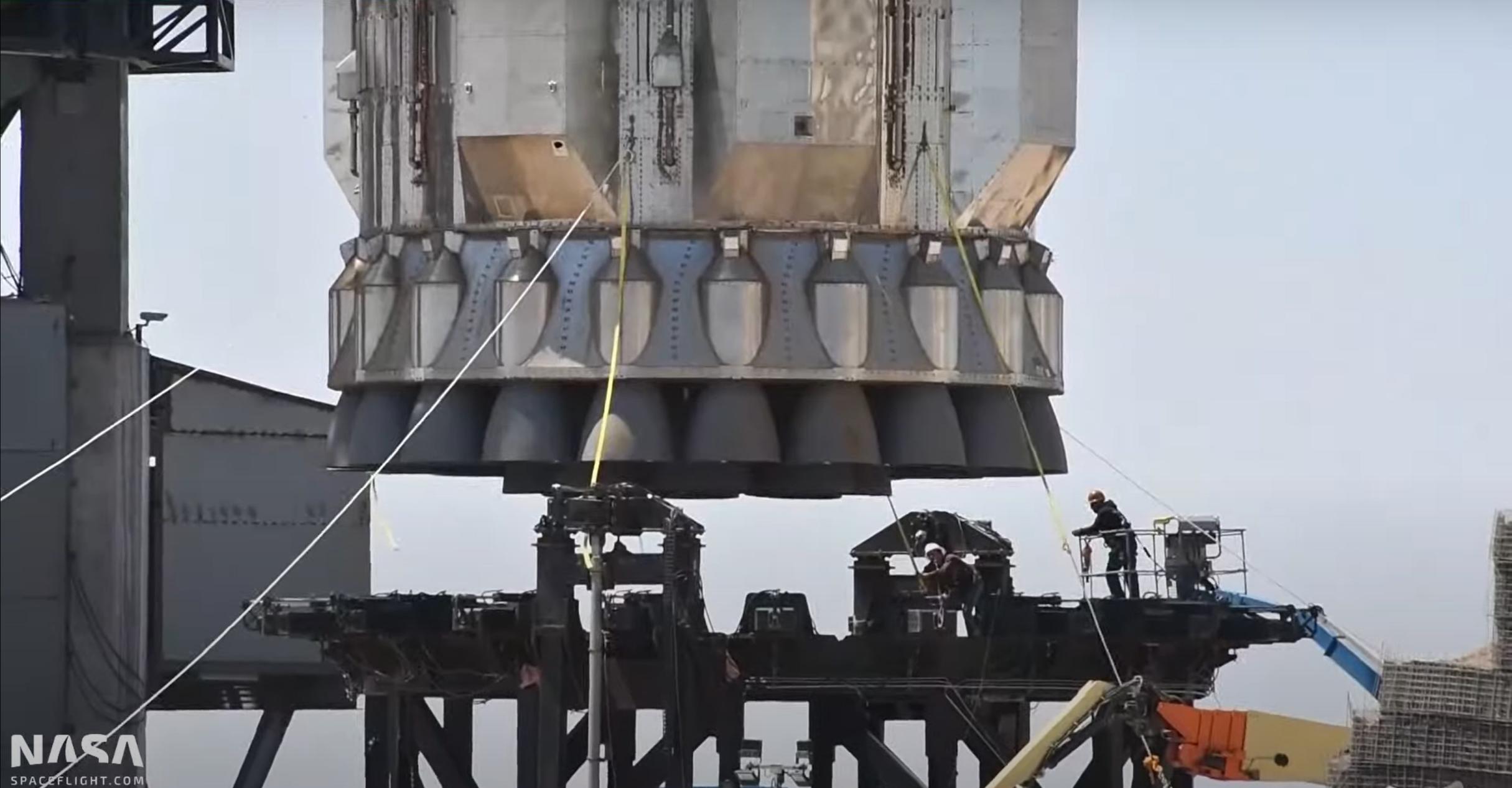 Standing about 69 meters (~225 ft) tall and likely weighing at least 200 tons (~440,000 lb), Booster 4 has been at SpaceX’s Starbase orbital launch site (OLS) for more than six months – only slightly less time than Starship S20, which it was expected to eventually launch into space. Several of those months were spent sitting on top of the pad’s 22-meter-tall (~70 ft) orbital launch mount, which has been slowly but surely outfitted, modified, and tweaked into something capable of supporting basic Super Heavy testing.

All told, Booster 4 has completed more than half a dozen cryogenic proof tests but never appeared to graduate to more complex and valuable wet dress rehearsals – replacing neutral liquid nitrogen with flammable liquid methane and oxygen propellant to simulate preparations for a real launch. Most importantly, despite having had 29 proof-tested Raptor engines installed for months, Super Heavy B4 never even attempted to static fire one of those engines, where a successful 29-engine static fire is probably the single most important test a booster will need to pass to be cleared for flight.

As a result, the writing has been on the wall for Booster 4 for quite a while. Instead of investing in testing the booster, which has a somewhat outdated two-off design, it appears that SpaceX will instead transfer crucial qualification testing to Super Heavy Booster 7. As previously discussed, on top of general improvements to process and fit and finish throughout, Booster 7 is substantially different from Booster 4.

“Super Heavy B7 and Starship S24 feature a wide range of design changes, including substantially modified header tanks, an entirely new nosecone design, new layouts for secondary systems (pressurization, avionics, heat exchangers, etc.), and more. Most importantly, their thrust structures – giant ‘pucks’ machined out of steel – have been tweaked to support new Raptor V2 engines instead of the Raptor V1 and V1.5 engines that have been installed and tested on all Starship and Super Heavy prototypes to date.”

One could easily argue that SpaceX should have better used the months upon months that Super Heavy B4 sat inactive and largely untouched at Starbase’s launch facilities – instead using that time to perform basic static fire testing that could even have even been done at one of two suborbital launch mounts if the orbital mount wasn’t ready. Nonetheless, irrespective of that seemingly wasted opportunity, it makes sense that SpaceX now wants to cut its losses and redirect its focus to prototypes with extensive upgrades and improvements.

Up next, SpaceX will continue to stack and outfit Starship S24. Already fully stacked, Super Heavy B7 could feasibly be rolled to the orbital launch site at almost any point within the next week or two to begin simpler pneumatic and cryogenic proof testing, followed by Raptor V2 engine installation and the start of static fire testing.