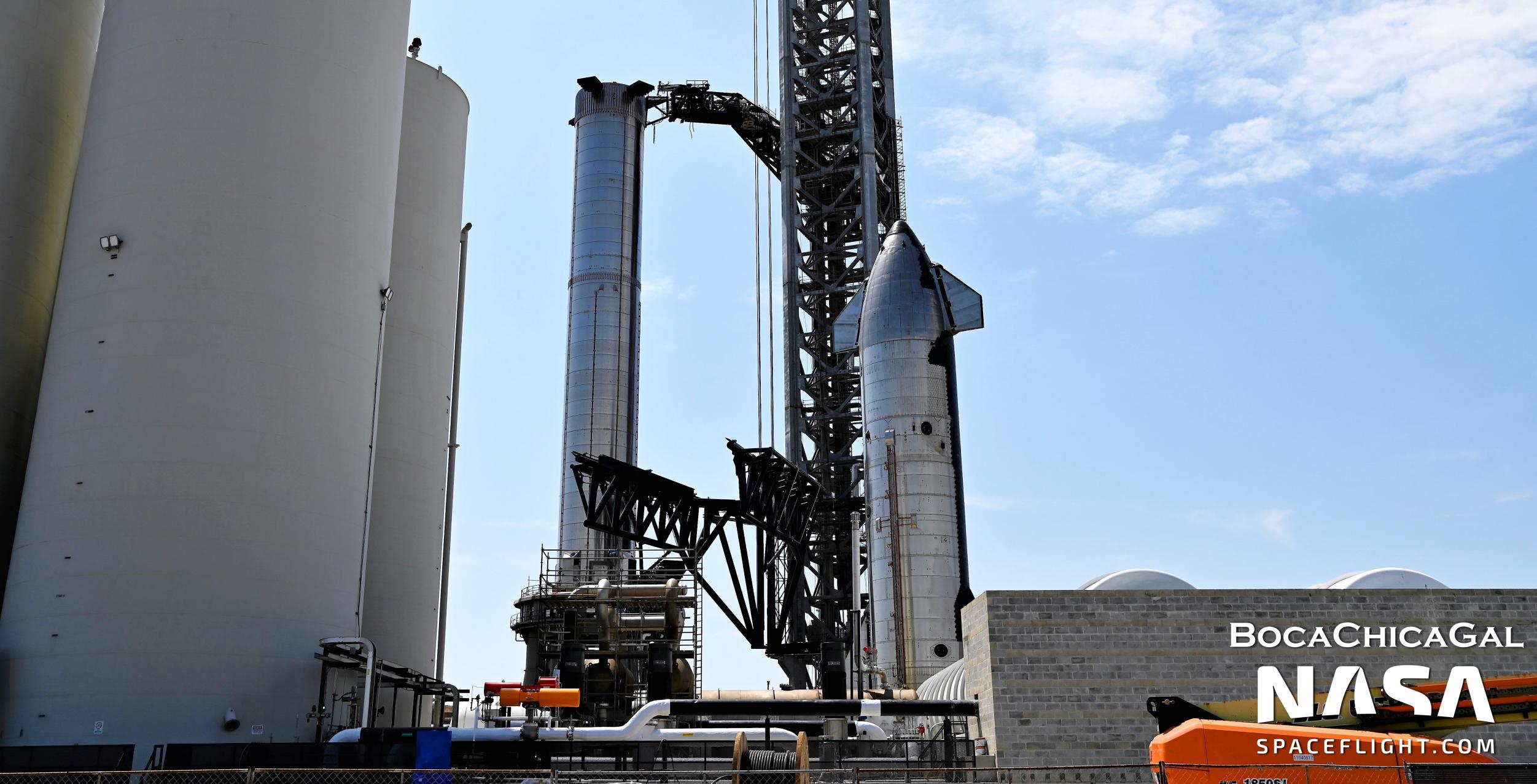 Update: Shortly before SpaceX CEO Elon Musk revealed that Super Heavy booster B4 and Starship S20 are no longer assigned to the rocket’s orbital launch debut, the company ‘destacked’ the pair for the third time.

Ship 20 was removed from Booster 4 on March 19th, two days before Musk’s tweets. That’s not unusual: it was actually Ship 20’s third removal from Super Heavy. However, almost as soon as the Starship was rolled out of the way, SpaceX began making visible preparations to also remove Super Heavy B4 from Starbase’s orbital launch mount. As of March 24th, the booster has been attached to a large crane for more than a day and a newly upgraded transport stand has been rolled into place beside the launch mount. It’s somewhat odd that the booster hasn’t already been removed but that step could happen at almost any moment, now – albeit likely in daylight.

Once both Ship 20 and Booster 4 have been removed, it’s hard to imagine that they will ever return to the orbital launch mount. In fact, at minimum, Super Heavy B4 will probably be retired almost immediately. Super Heavy B7 – a superior, refined, and upgraded prototype by almost every measure – is already almost fully assembled and could likely begin basic testing within a week or two.

SpaceX CEO Elon Musk says that Super Heavy Booster B4 and Starship S20 are no longer scheduled to support the first orbital-class test flight of the world’s largest rocket.

Rumors, signs, and reports of the significant change have been flowing among unofficial spaceflight communities for months. Booster 4 and Ship 20 were first confirmed by Elon Musk to be the pair assigned to Starship’s orbital test flight (OTF) in the summer of 2021. When the pair first rolled out to the launch pad in early August, Musk seemed confident that they could be ready for an orbital launch attempt within a month or two. The same was true in November 2021, when Musk stated that the same Starship and Super Heavy pair could be ready for their first launch as early as January or February 2022.

Crucially, Musk revealed that the first Starship to attempt an orbital-class launch will now feature upgraded Raptor V2 engines – engines that require an entirely new thrust structure design. That already all but guaranteed that B4 and S20 had been overtaken but Musk also explicitly confirmed that they would be replaced with a new pair in a later tweet.

That new pair – widely assumed to be Super Heavy B7 and Starship S24 – feature a wide range of design changes, including substantially modified header tanks, an entirely new nosecone design, new layouts for secondary systems (pressurization, avionics, heat exchangers, etc.), and more. Most importantly, their thrust structures – giant ‘pucks’ machined out of steel – have been tweaked to support new Raptor V2 engines instead of the Raptor V1 and V1.5 engines that have been installed and tested on all Starship and Super Heavy prototypes to date.

Musk believes that SpaceX will be able to build (and presumably qualify) all 39 of the Raptors Ship 24 and Booster 7 will need before the end of April and fully install them – as well as all the heat shield components that must be fitted around them – by the end of May 2022. It’s unclear if the SpaceX CEO is accounting for the extensive proof testing Ship 24 and Booster 7 will likely need to complete before being qualified for flight, including cryogenic proof tests, wet dress rehearsals, and at least a few static fire tests.

In fact, SpaceX has only performed a single three-engine static fire test with a fully outdated Super Heavy prototype. Before the company is confident in its booster design, it’s practically a certainty that one or more prototypes will be put through a lengthy test campaign that gradually evolves from igniting a few engines to igniting all 29 or 33 Raptors. That may actually be one of the reasons SpaceX appears to be retiring Booster 4 without a single static fire or flight test – performing all the requisite work may have ultimately been perceived as a dead-end when every future Starship and Super Heavy prototype will feature a heavily redesigned engine.

This is to say that much like Musk’s last few Starship OTF schedule estimates, May 2022 also appears to be extremely optimistic. Booster 7 could potentially be ready for cryogenic proof testing any day now but Ship 24 is still in five large pieces and probably at least a month from any form of test readiness. Still, there are some reasons for optimism. If Booster 7 actually does start basic proof testing this month or early next without waiting for its Raptor engines or for heat shield installation, SpaceX could theoretically complete cryoproofing, begin installing one or a few new Raptors at a time, and iteratively progress from static firing a few to all 33 engines as the engines are arriving at Starbase.

At a minimum, even if that razor-sharp test schedule isn’t possible, Booster 7 would at least have a month or so of extra testing over Ship 24, minimizing the disproportionate amount of testing each prototype will likely need to be qualified for flight. Unlike Booster 4, Ship 20 has completed several static fires and cryoproofs without any apparent issue.

For now, SpaceX continues to prepare Ship 24 sections for stacking and appears to be buttoning up Booster 7, which could easily be ready to roll out for basic testing within a few weeks – and maybe sooner.