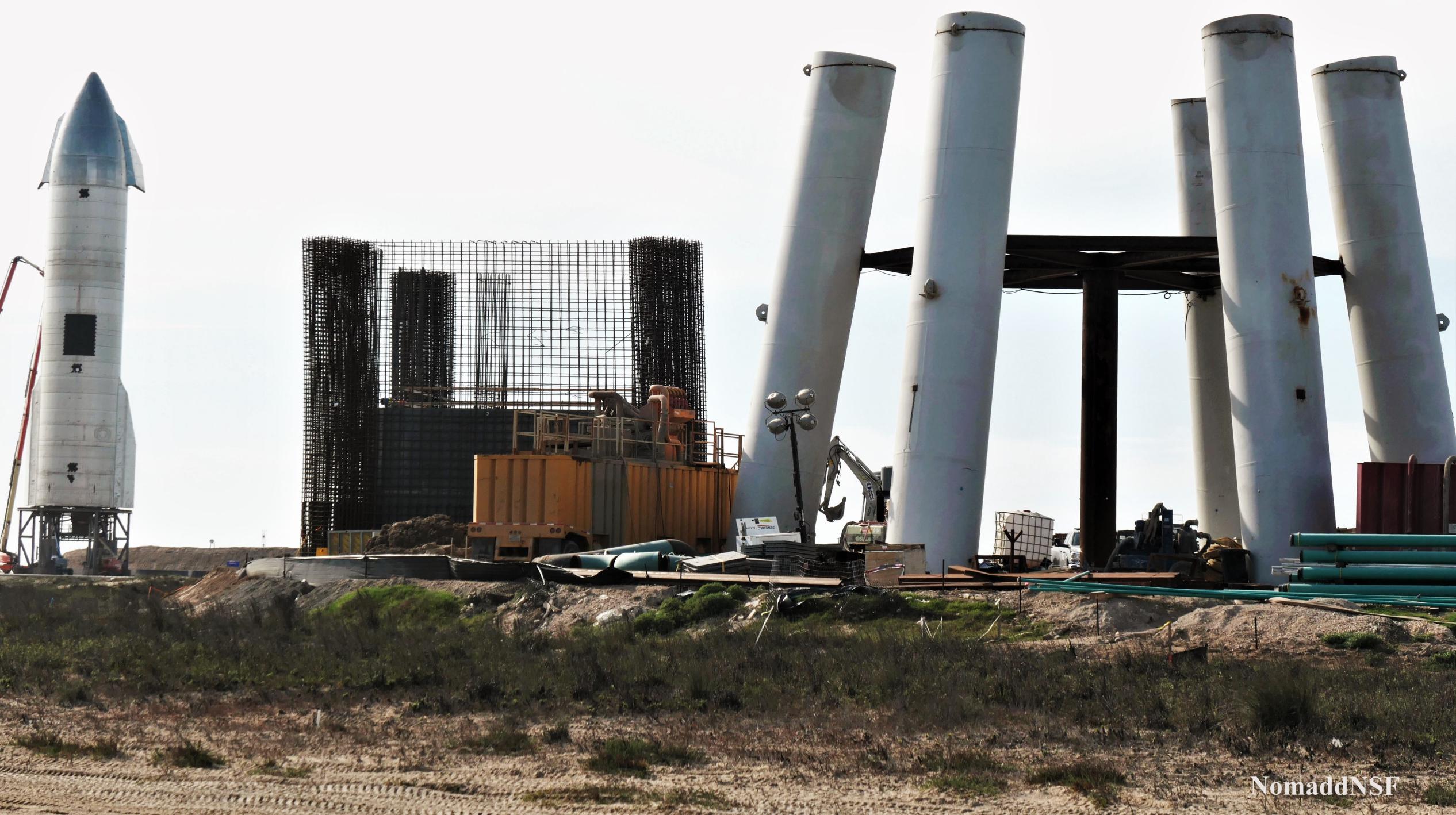 Aerial photos show that SpaceX has rapidly begun building the first of two planned skyscraper-sized Starship ‘launch towers’ in South Texas – towers that could one day catch the Super Heavy boosters out of the air with huge arms.

CEO Elon Musk first revealed that outlandish Starship booster recovery plan around the turn of the year, followed three months later by an even wilder claim that the same booster-catching tower could also catch Starships. Around the time the idea was first floated, SpaceX was beginning to build one of two planned towers that might be outfitted with arms in the future. Progress was mostly invisible at first, hinted at only by the presence of a self-propelled drill and a few muddy holes in the right spot.

By mid-March, SpaceX had begun clearing away some of the dirt on top, revealing a beefy foundation with 25 two-foot-thick (~1m) piles buried at least 100 ft (30m) deep in the sandy wetlands. Two weeks later, the foundation has been encased in concrete and the framework for massive base is nearly ready for its first concrete pour.

In other words, SpaceX’s first South Texas launch tower has just begun to take shape and grow vertically. First and foremost, its purpose is to provide an extremely sturdy base with which SpaceX can install Super Heavy boosters on the launch mount and then install Starships on top of those boosters. Standing at least 122 meters (~395 ft) tall from tip to tail without even accounting for the launch mount/stand Starship will attach to, that seemingly simple task ends up being not so simple at all.

Situated less than a mile from the Gulf of Mexico, Boca Chica is typically an extremely windy environment at sea level – let alone hundreds of feet above ground – and the South Texas coast is almost constantly at risk of torrential rain, thunderstorms, hurricanes, and flooding. As far as building giant, sturdy towers and performing work as sensitive and precise as vertically mating rocket stages, it’s hard to imagine a viable launch site with less favorable conditions short of Siberia or the Russian steppe.

According to Musk, SpaceX’s Boca Chica launch tower will have a “hook height” (the distance from the crane hook to the ground) of at least 140m (~460 ft), meaning that the top of the tower’s crane will likely be 150-160m (490-520 ft) tall when configured to mate Starship to Super Heavy.

Beyond those general details and the occasional official SpaceX render of possible launch facilities, not much else is known about how Boca Chica’s launch tower will look and function, particularly with respect to vague plans to catch Super Heavy boosters. However, SpaceX appears to have aggressively turned its attention to building out Boca Chica’s first orbital launch facilities and the progress made in the last two months suggests that it wont be long before what was recently a dirt apron will be ready to support Starship and Super Heavy testing.

According to Musk, SpaceX’s internal goal is to attempt Starship and Super Heavy’s first orbital launch as early as July 2021. If the company continues to work around the clock on rocket’s orbital launch site as it has for the last two months, it’s far from inconceivable that the pad will be ready for that orbital launch debut even if Starship is not. Stay tuned for more updates as the pad and launch tower continue to take shape.