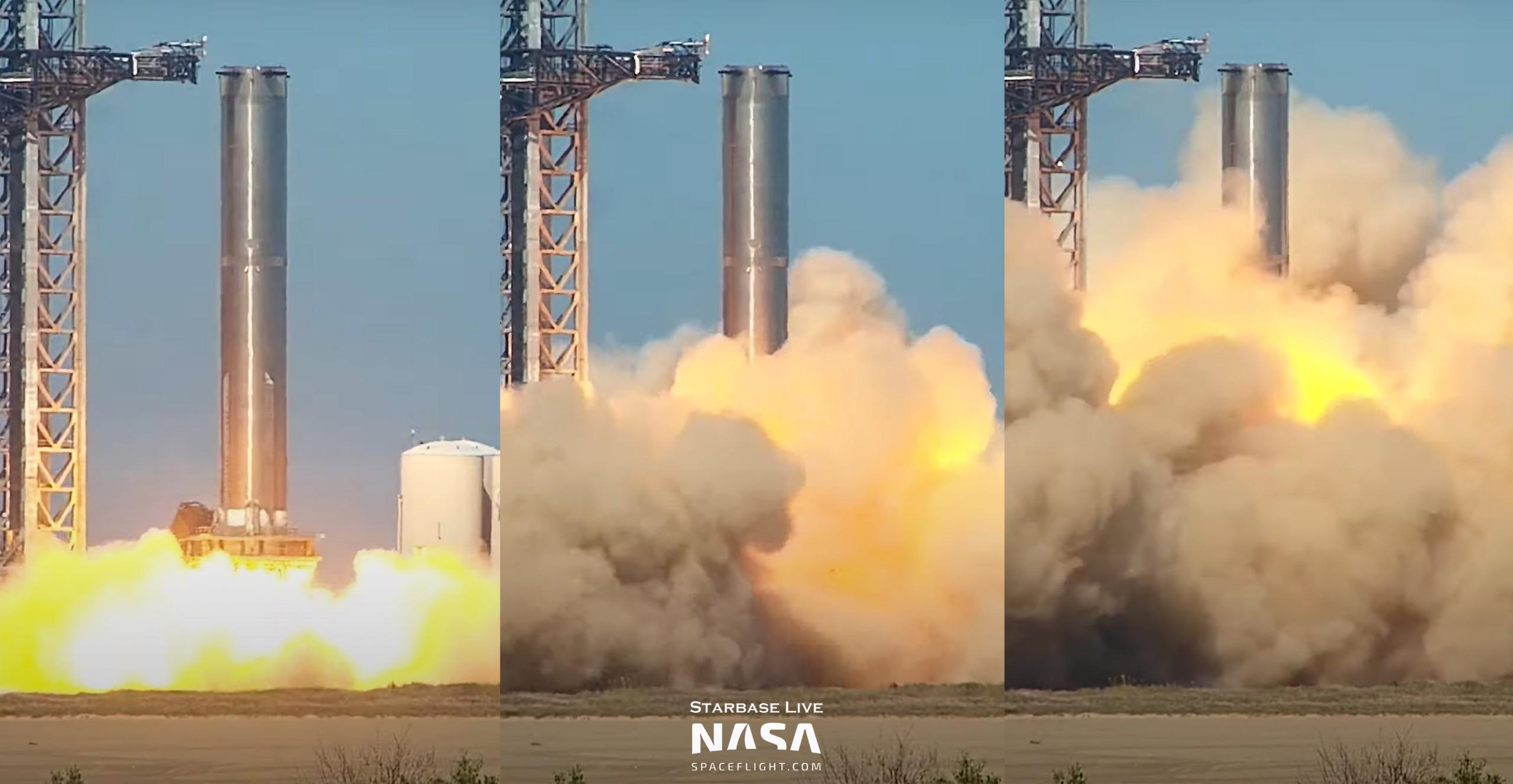 A SpaceX Starship booster has successfully fired up 14 of its 33 Raptor engines, likely becoming the most powerful active rocket in the world.

Throughout the history of spaceflight, only three or four other rockets have produced as much or more thrust than Super Heavy Booster 7 (B7) could have theoretically produced on November 14th. But the Soviet Energia and N1 rockets and the US Saturn V and Space Shuttle were all retired one or several decades ago. Only SpaceX’s own Falcon Heavy rocket, fifth on the bracket and capable of producing up to 2325 tons (5.13 million pounds) of thrust at sea level, is still operational and comes close.

Powered by 33 upgraded Raptor 2 engines that SpaceX says can produce up to 230 tons (~510,000 lbf) each, Super Heavy could have produced up to 3220 tons (7.1 million pounds) of thrust when it ignited 14 of its engines earlier today. That likely means that Starship is now the fourth most powerful rocket ever tested, slotting in above NASA’s Space Shuttle but below the Soviet Energia. And even if all 14 engines never throttled above 73%, SpaceX’s Starship booster likely still produced more thrust than any other active rocket in the world, beating Falcon Heavy. But if NASA has its way, Starship could hold that title for less than 36 hours.

As early as 1:04 am EDT (06:04 UTC) on November 16th, a little over 35 hours after SpaceX’s record-breaking Starship static fire, NASA will attempt to launch its massive Space Launch System (SLS) rocket for the third time since late August. At the explicit request of Congress, which wanted to preserve Shuttle jobs after the end of the program in 2011, SLS essentially shuffles around Space Shuttle parts and replaces the reusable orbiter with a fully-expendable rocket. The Solid Rocket Boosters (SRBs) have been extended and uprated, and the orange External Tank has been stretched and turned into a liquid rocket booster affixed with four RS-25 engines to the Shuttle’s three.

If things go according to plan, those changes mean that SLS rocket will produce up to 3990 tons (8.8 million pounds) of thrust when it lifts off for the first time, overtaking Super Heavy B7 but also making it the second most powerful launch vehicle in history after the Soviet N1. N1 never succeeded, however, so SLS could become the most powerful rocket ever to reach orbit if its first launch is successful.

But just as SLS appears poised to almost immediately unseat Starship’s position as the most powerful active rocket in the world, Starship is poised to beat SLS to become the most powerful rocket ever flown – successfully or not – when it attempts its first orbital launch either next month or early next year. With all 33 Raptors at full throttle, Starship can produce almost 7600 tons (16.7 million pounds) of thrust at liftoff, beating the previous record-holder – the Soviet N1 rocket – by nearly 60%.

Even if that first launch attempt is unsuccessful, SpaceX appears to be preparing for several more rapid-fire launches that will continue until success is achieved, beating SLS’ other (potential) record. SpaceX has demonstrated that ability once before with Starship when it completed five flights of five different prototypes in less than six months. As a result, it’s likely that by the time SLS launches a second time in the mid-2020s, it will be the third most powerful rocket, second to N1 and Starship.

That slightly awkward upset should be lessened by the fact that Starship and SLS are, for the time being, both integral parts of NASA’s Artemis Program. To return astronauts to the Moon for the first time since 1972, SLS and its Orion spacecraft will transport NASA astronauts to lunar orbit, where they’ll board a Starship-derived Moon lander. Starship will then land those astronauts on the lunar surface, support about a week of surface operations, and then return them to lunar orbit, where Orion will transport them back to Earth.

For now, a massive amount of work remains to be done before NASA and SpaceX will be ready to support that crewed Moon landing. But Monday’s Starship static fire and Wednesday’s potential SLS launch both represent significant, tangible steps towards that lofty goal.