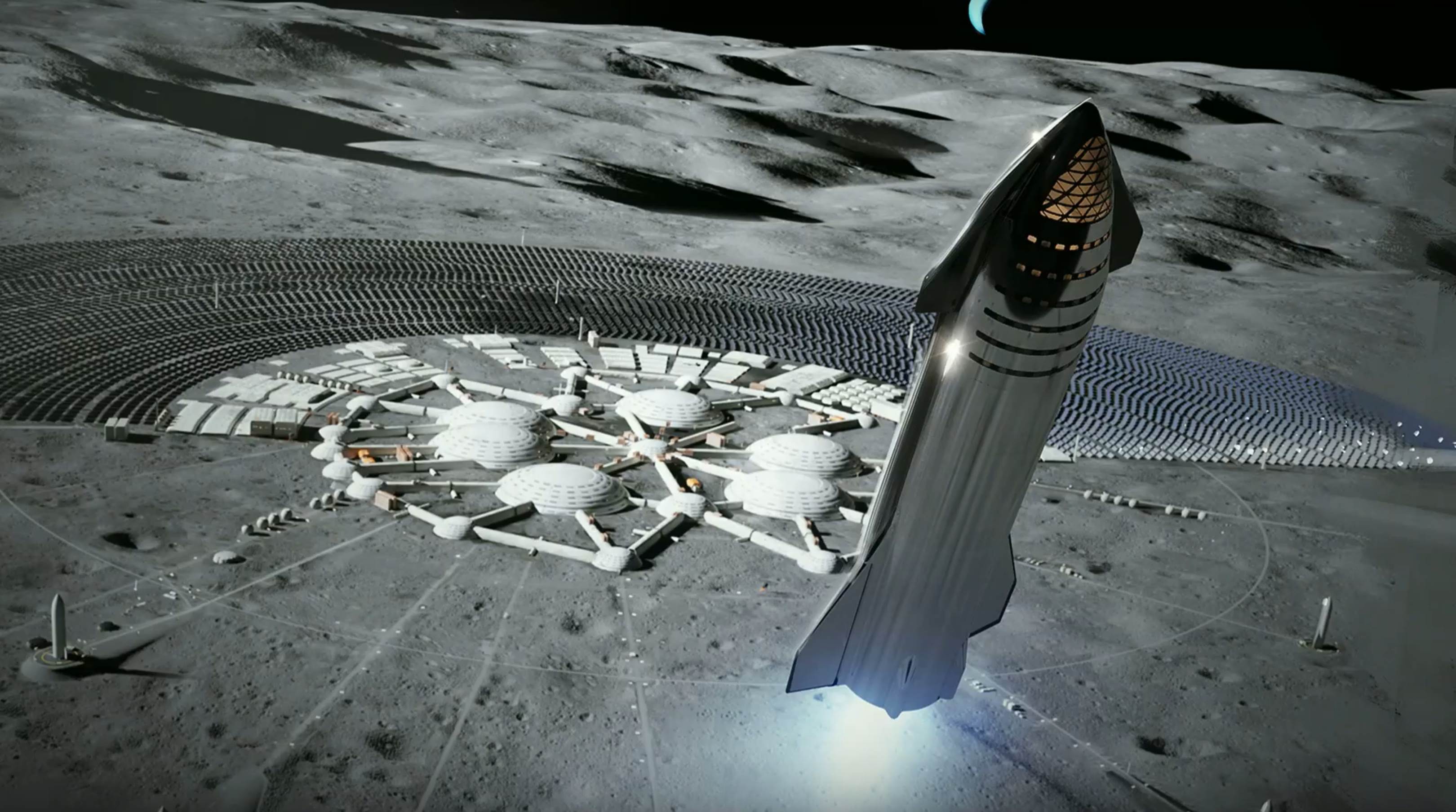 SpaceX teased a vision of a Starship-enabled Moon base at CEO Elon Musk's 2019 update. (SpaceX)

SpaceX CEO Elon Musk has revealed updated renders of conceptual Moon and Mars bases that may ultimately be made possible by the company’s next-generation Starship and Super Heavy launch vehicle.

With Starship, SpaceX hopes to enable the rapid and affordable expansion of humanity into space by ensuring that both Starship and Super Heavy are rapidly reusable. According to Musk, the ambition is to optimize their design to the point that both can launch multiple times every day, approaching a level of availability similar to modern airliners. It must be acknowledged that that is quite possibly one of the most difficult engineering challenges one could tackle, but even falling well short would likely produce a spacecraft and booster radically cheaper to operate than any rocket in history.

In SpaceX’s newest renders, Starship is backed by spectacularly expansive cities on the Moon and Mars, with the Moon base featuring an entirely new design language. SpaceX and Elon Musk have always maintained that their base/city renders are entirely conceptual and not to be taken too literally, but it seems exceedingly unlikely that the company’s high-quality CGI is not backed by some level of intentional design. SpaceX is already working on the logistical hurdles that stand between the company and large Martian cities and preliminary outpost design is well within the purview of long-term planning.

SpaceX’s lunar city/base render, however, is dramatically different (and more ambitious) than the renders the company has shown over the last two or so years. This year’s updated design includes a massive half-circle solar array, a propellant production and storage plant, and an expansive habitat area likely large enough to house thousands of people. Whether or not a serious SpaceX-built (or at least delivered) Moon base happens is probably entirely dependent upon whether NASA is interested or willing to help support it. SpaceX and Elon Musk have noted in the past that the company’s unequivocal priority is Mars.

Political winds in NASA and Congress may or may not continue to lean in the direction of a return to the Moon. Additionally, it must be acknowledged that landing Starship on the Moon with significant payload and enough propellant to return to Earth is far more technically challenging than landing on Mars. The Moon has no atmosphere to slow the rocket down, whereas a huge amount of delta V (i.e. propellant) can be saved by aerobraking and using Starship’s fins to perform skydiver-esque landings on Earth and Mars.

Regardless, it’s awesome to see what looks like a seriously fleshed-out SpaceX Moon base concept. With the first full-scale Starship prototype as few as one or two months away from flight readiness, SpaceX is closer than ever before to achieving its overarching goal: making humanity a multiplanetary species. A huge amount of work remains, no doubt, but it’s now almost impossible to act like SpaceX isn’t dead serious about achieving its (admittedly towering) goals.