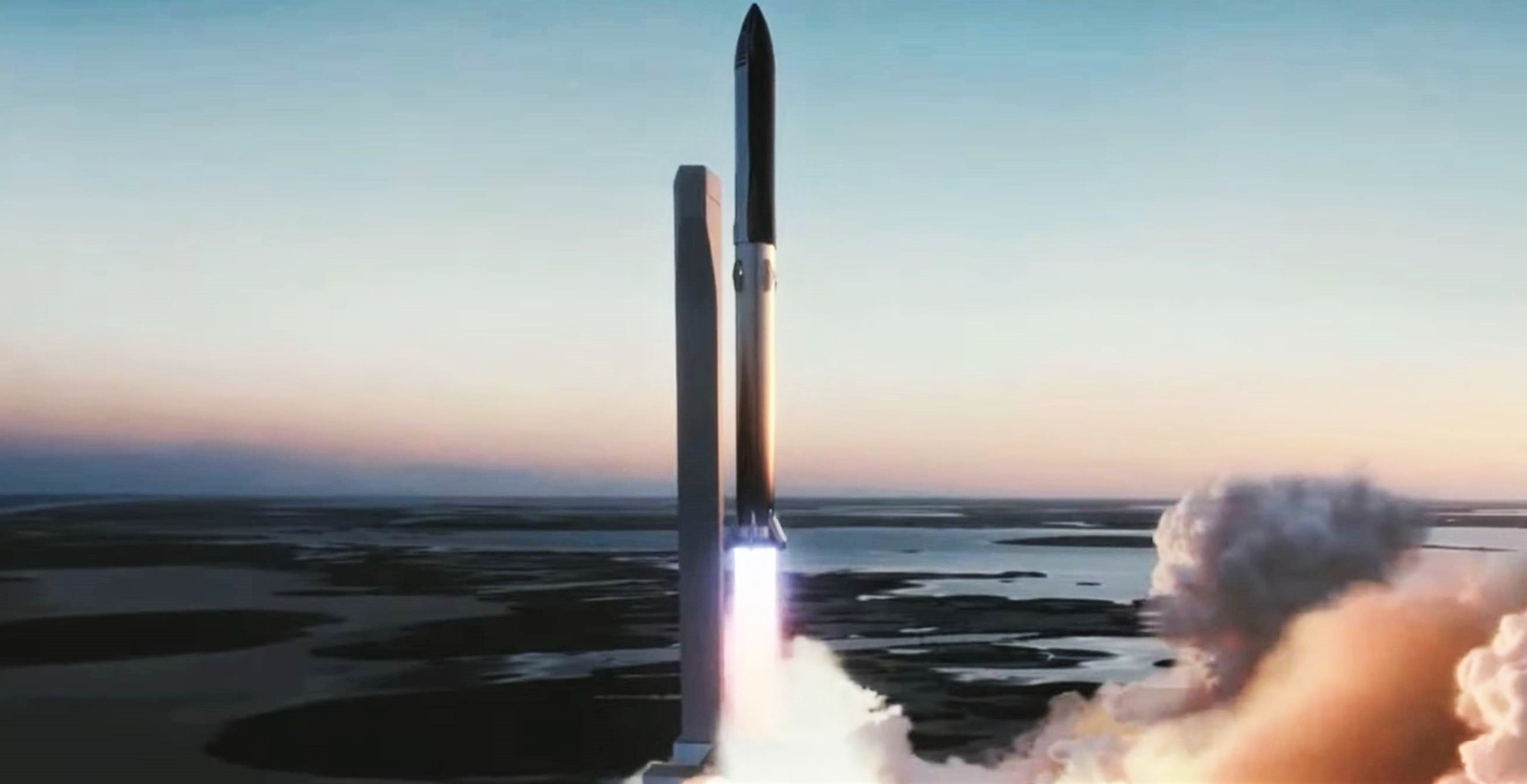 Starship lifts off atop a massive Super Heavy booster, featuring six landing legs and up to 37 Raptor engines. (SpaceX)

Speaking on Saturday night (Sept. 28th) at the base of the SpaceX’s Starship Mk1 prototype in Boca Chica, Texas, CEO Elon Musk delivered an update on the progress the company is making with Starship and its Super Heavy booster, including the first renders of the massive first stage’s new steel design.

In the 2019 design update Musk stated that the booster will match Starship in diameter at 9m (~29.5ft) and will feature a multi-engine design, colossal grid fins, and six landing legs. Super Heavy will stand 68m (223 ft) tall and weigh up to 3300 tons when fully loaded with liquid oxygen and methane propellant.

While Super Heavy is designed to support up to 37 Raptor engines, it is meant to be reconfigurable and ideally will only require 24 – 31 Raptor engines. According to Musk, the booster is actually designed to add or subtract engines as necessary based on payload demands and launching conditions, while also adding the benefit of massive redundancy in the event of mid-flight engine failure(s).

The most critical component for the booster, according to Musk, is that there is “a lot of force pushing up.” He states that to launch Starship, the Super Heavy booster would ideally produce roughly 7500 tons of thrust – about twice the thrust of that of a Saturn V rocket. For a reusable rocket design – such as with the Super Heavy booster – a high thrust to weight ratio (about 1.5 : 1) is a necessity for efficient operation.

Additionally, Musk briefly spotlighted other design adjustments including a change in grid fin design and the configuration of the landing legs. Many of the principles that have been flight-proven with Falcon 9 boosters – such as the use of grid fins and landing legs – will be carried over and scaled up with the Super Heavy booster.

As seen in the animation of the Super Heavy – Starship launch, the booster is expected to perform a flip after first stage separation to return back to land at (or close to) the launch site, just like a Falcon 9. Musk explains that the aerodynamic shrouds covering the booster’s landing legs will serve no functional, lift-producing purpose. However, unlike Falcon 9 landing legs that retract only moments before touchdown, Super Heavy’s landing legs will be fixed, aside from – perhaps – some mild shock absorption capabilities.

Musk seems confident that both Super Heavy and Starship will begin operation to support orbital flights relatively soon. The Super Heavy booster will support Starship launches from pads in Boca Chica, Texas and at Cape Canaveral, Florida’s Launch Complex 39A as early as six months from now. The Starship Mk1 prototype is expected to begin an aggressive flight-test campaign to altitudes of at least 20km (65,000ft) within the next 1-2 months, according to Musk.