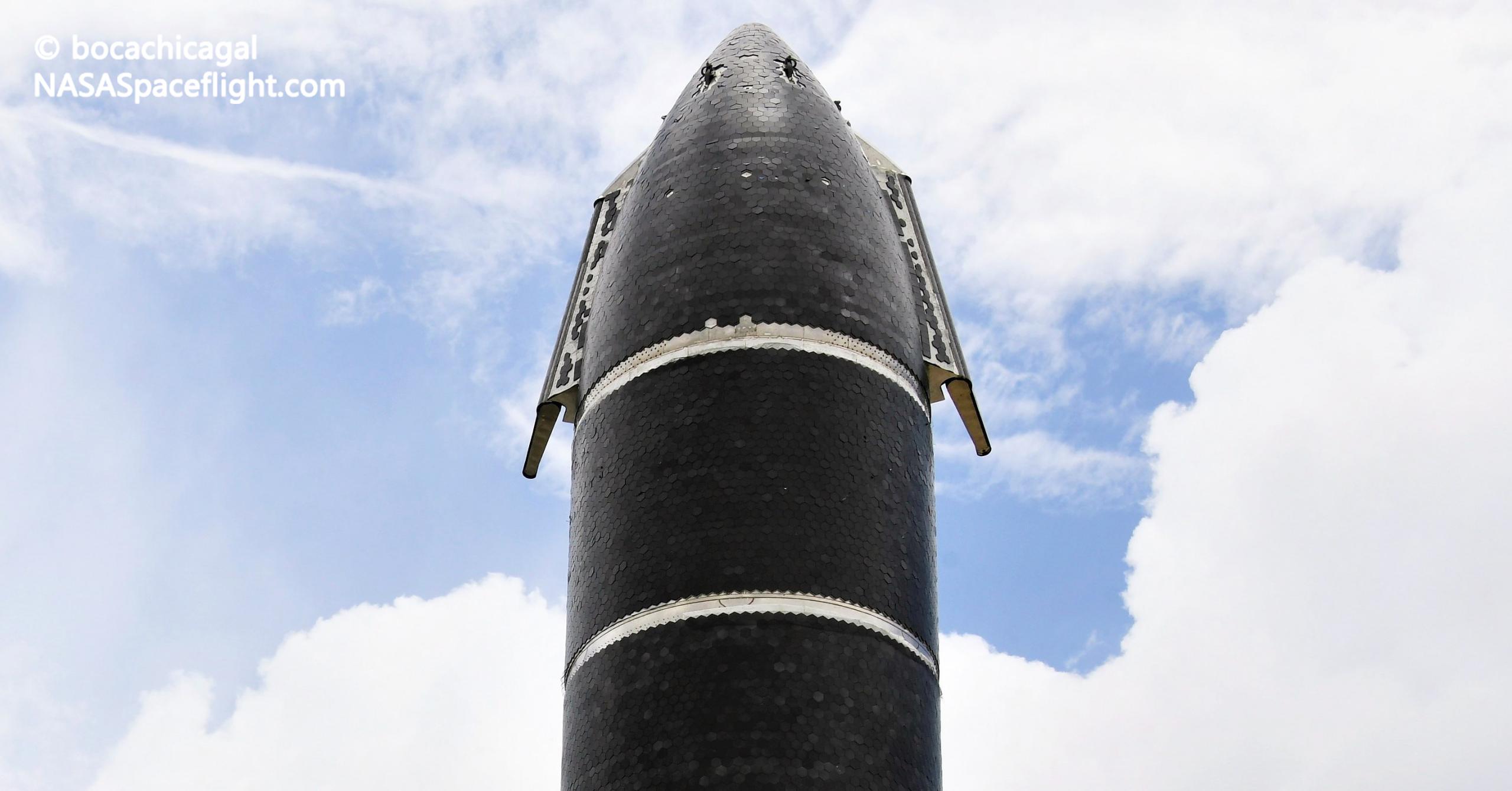 SpaceX CEO Elon Musk says that there is a “slight error” with the current design of Starship’s forward flaps, necessitating a few small but visible changes on future prototypes of the spacecraft.

Measuring 9m (30 ft) wide and approximately 50m (~165 ft) from tip to tail, Starship is the combined upper stage, spacecraft, tanker, and lander of a two-stage, fully-reusable rocket with the same name. While SpaceX has a long ways to go to achieve it, the company’s ambition is for Starship and its Super Heavy booster to be the most easily and quickly reusable spacecraft and rocket booster ever built, nominally enabling the same-day reuse of both.

Beyond a Space Shuttle-style heat shield of blankets and ceramic tiles, the Starship upper stage is meant to achieve that reusability by descending through the atmosphere and landing unlike any other spacecraft, plane, or rocket ever flown. Instead of flying, gliding, or knifing through the atmosphere nose or tail-first, Starship freefalls perpendicular to the ground for the last few dozen kilometers (~10-20 mi) before aggressively flipping into a vertical orientation at the last second and landing propulsively on its tail. Now, according to Elon Musk, two of the four ‘flaps’ that largely make that exotic maneuver possible are set for a small but significant redesign.

Over the course of five suborbital test flights of full-scale Starship prototypes completed between December 2020 and May 2021, SpaceX took that exotic landing concept from the drawing board and subscale wind tunnel testing to reality. Though four of those five tests ended in destruction, their respective Starship prototypes really only failed in the last 15-30 seconds of test flights that were more than six minutes long.

After reaching an apogee of 10-12.5 km (~6.2-7.8 mi) over the course of some four and a half minutes, all five Starship prototypes successfully shut down their Raptor engines, tipped over onto their bellies, and then used a combination of small pressurized gas thrusters and four large flaps to stably fall back to Earth. Much like a skydiver can tweak their body, arms, and legs to control their orientation and attitude, Starship uses two pairs of forward and aft flaps to achieve a very similar level of control.

Thanks to Starship’s significant surface area and relatively low mass shortly before landing, that unprecedented freefall-style descent naturally slows the rocket to just 100-200 mph (~50-100 m/s) while simultaneously allowing SpaceX to avoid the massive complexity and added mass of structural wings or fins like those on the Space Shuttle. Further, whereas the Shuttle used its wings to glide (albeit like a brick) and land on very long runways, Starship is designed to use three of its six Raptor engines to flip into a vertical orientation and land much like SpaceX’s own spectacularly successful Falcon boosters.

During the actual process of reentry, in which Starship uses a heat shield made up of ~15,000 ceramic tiles to slow from orbital (Mach 25 or ~7.5 km/s) to subsonic speeds, those same flaps also come in useful to control the vehicle’s angle of attack and thus the degree of extreme heating experienced. According to Musk, to improve the moment arm (i.e. leverage or, all else equal, torque) of Starship’s forward flaps and reduce or remove undesirable aerodynamic characteristics, SpaceX is going to shrink those forward flaps further, move them closer together and more towards the tip of Starship’s nose, and angle them toward the ship’s leeward side (back).

Apparently, those relatively minor changes mean that a portion of Starship’s forward flaps will no longer be directly subjected to reentry heating, potentially allowing SpaceX to entirely remove static “aerocovers” that wrap around the ship’s flaps to prevent superheated plasma and gas from reaching sensitive components. Ironically, SpaceX’s thermal protection team completed the installation of heat shield tiles on one of those forward flap aerocovers for the first time ever just a few days ago – a structure and portion of heat shield that will apparently no longer be needed on future Starships.

For now, though, it looks like Ship 20 will attempt Starship’s first orbital launch with its now-outdated forward flaps. Depending on how far along Ship 21 production is, the next prototype could feasibly sport that new flap design.