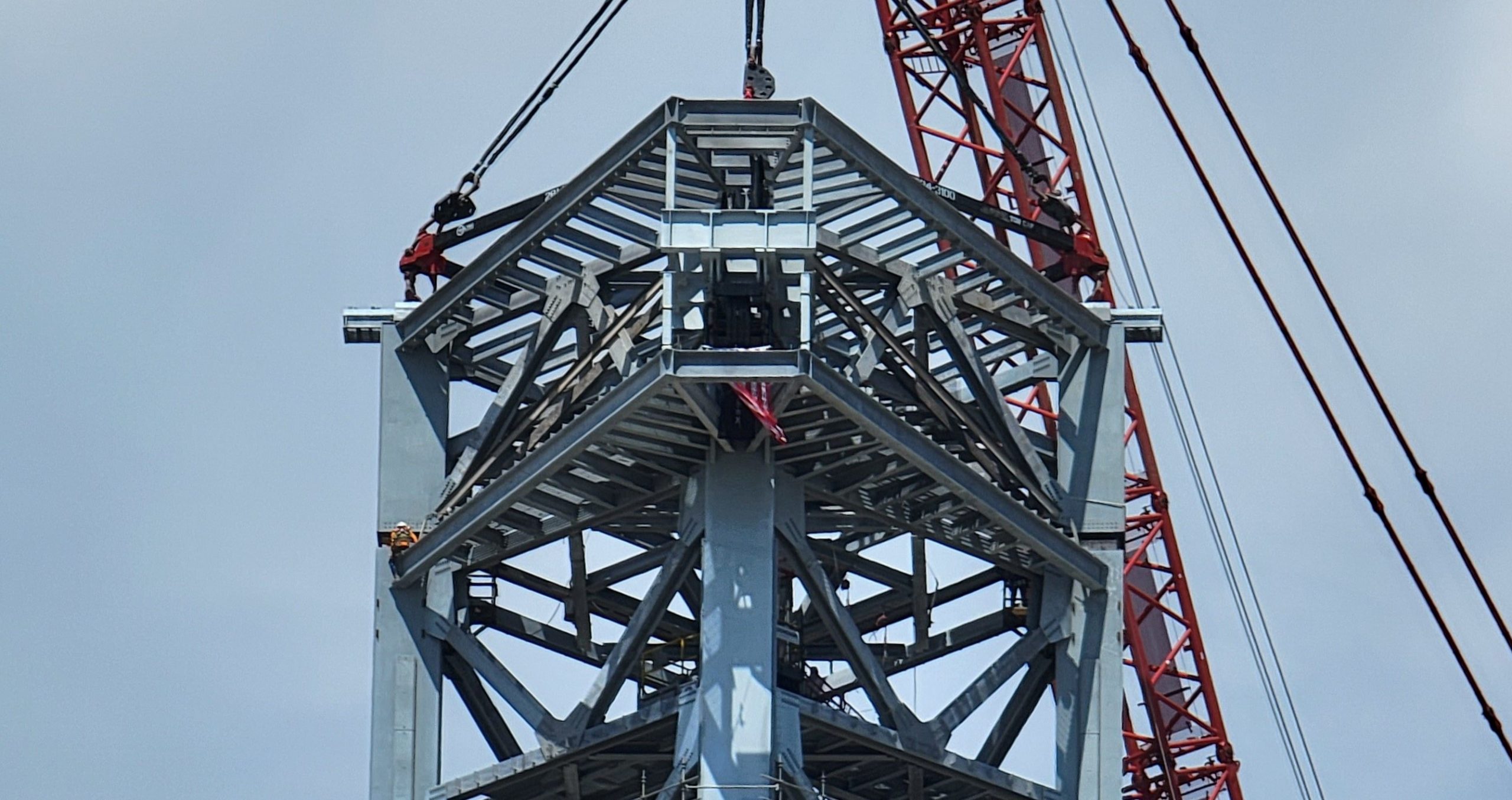 SpaceX's orbital Starship 'launch tower' has been topped off with an imposing visage - representing the start of its 'Mechazilla' transformation. (Starship Gazer)

Update: After an aborted attempt on Tuesday, SpaceX has successfully installed the ninth and final section of Starship’s South Texas ‘launch tower, completing what amounts to the backbone of what CEO Elon Musk has described as a rocket-catching “Mechazilla.”

With the tower now stacked to its full ~145m (~475 ft) height, SpaceX can begin the process of outfitting it with a complex system of bus-sized actuating arms, propellant plumbing for Starship, hydraulic systems, and a network of cables and pulleys. It’s also believed that the tower structure itself will need to have each of its nine bolted steel sections welded together and all four of its steel ‘legs’ filled with concrete. However, it’s not out of the question that SpaceX will be able to activate the launch tower – albeit with a very basic degree of initial functionality – with just a few more weeks of work.

After a burst of activity and custom part deliveries, SpaceX appears to be almost ready to start turning Starship’s vast launch tower into what CEO Elon Musk has described as a “Mechazilla.”

Over the last few weeks, a number of new components have begun to quickly take shape, offering the first real glimpse of what SpaceX’s latest (hopeful) innovation might look like and how it could function. Earlier this year, Musk revealed plans to forgo landing legs entirely on earthbound Super Heavy boosters – and, potentially, Starships – by using a giant tower with arms to quite literally catch the rockets out of the air.

Those unintuitive plans have triggered wild speculation as the aerospace fans that follow SpaceX closely attempted to imagine what such a solution might look like – often engaging in a sort of vague back-and-forth with Musk himself as the CEO occasionally replied to fan-made depictions and renders.

Months after the reveal, though, parts of that tower’s rocket-manipulation mechanisms have begun to arrive on a near-constant stream of flatbed trucks and something is being assembled on a concrete pad previously used as a Starship landing zone. Two distinct structures are in work at the LZ: one a large framework assembled out of banana yellow metal tubes and the other a (for now) flatter black structure being assembled out of prefabricated components reminiscent of crane parts and trusses.

Now standing some 135m (~440 ft) tall, SpaceX’s Starship ‘launch tower’ has also been assembled from 9 different segments with what looks like six vertical rails running most of the length of three of its four rectangular legs. Since they were first spotted months ago, it’s long been assumed that those tracks will support some kind of elevator-like carriage meant to cling to the tower’s exterior. That carriage would then be outfitted with at least three (and probably five or more) large arms capable of catching, stabilizing, and fueling Starship.

Over the last week or so, SpaceX has also been hard at work completing the ninth and final section – believed to be the roof – of the launch tower. In the last few days, that four-legged tower section has been outfitted with an interesting appendage that itself was then fitted with several massive sheaves (i.e. pulleys). That hardware will likely become part of a high-power pulley system that will pull the arm carriage up and down the tower, allowing it to grab, lift, and catch Starships and Super Heavy boosters.

By all appearances, SpaceX is preparing to install the launch tower’s last prefabricated section, likely raising the tower to its final ~145m (~475 ft) height. It’s possible that a crane of some kind will be permanently installed on top of the tower but it currently looks like SpaceX intends to rely exclusively on the tower’s arms to install, stack, stabilize, fuel, and (maybe) catch Starship and Super Heavy.