Ford today announces Romulus, Mich., will be the home of its new global battery center of excellence – Ford Ion Park – which is accelerating the company’s research and development of battery and battery cell technology – including future battery manufacturing.

Today, Ford Motor Company announced that it will establish Ford Ion Park, an electric vehicle battery cell production and research and development facility. The Michigan automaker will stay in its home state for this new project, launching the site in Romulus, MI, keeping with its 2010 announcement to make the state Ford’s center of excellence for EVs.

Ion Park will be held at a refurbished 270,000 square foot facility. Housing a maximum of 200 engineers, the facility will include “world-class pilot-scale equipment for electrode, cell, and array design and manufacturing engineering and innovation,” Ford said. 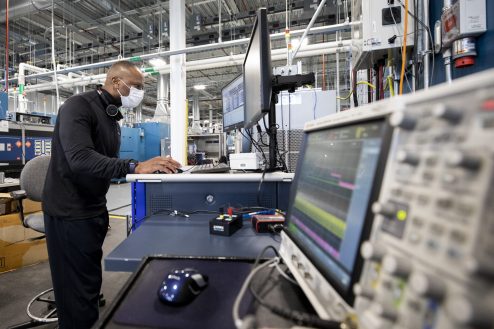 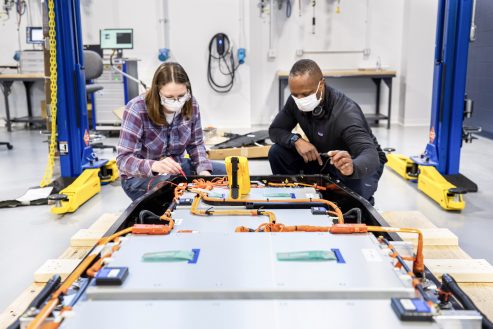 Dane Hardware, Ford Motor Co. design and release engineer, and Mary Fredrick, Ford Motor Co. battery validation engineer, measure the voltage of a battery using a digital multi-meter at Ford’s Battery Benchmarking and Test Laboratory in Allen Park, Michigan. Since this battery is not connected to a test setup, the meter is used to confirm the battery voltage and check isolation.

Following the successful launch of the Mustang Mach-E last year, Ford’s first attempt at electrification has gone much better than its other legacy competitors. The Mach-E maintained the fourth spot in Car and Drivers’ most recent EV rankings, finishing behind the Tesla Model Y and Model 3 and the Chevrolet Bolt EV, respectively.

“Ford already is delivering on our plan to lead the electric revolution with strong new vehicles including Mustang Mach-E, 2022 E-Transit available late 2021 and the 2022 F-150 Lightning available from spring next year,” said Anand Sankaran, who will be the Director of Ion Park. “The new lab will help Ford speed up the battery development process to deliver even more capable, affordable batteries and is part of Ford’s renewed commitment to making Michigan a centerpiece of its focus on EVs.”

Much like industry leader Tesla, Ford is attempting to figure out the challenges behind battery cell constraints while exploring new technologies that could introduce increased range, performance, and lifespan for EV cells. After announcing a $185 million investment into EV battery cell development, including the development of cell arrays, testing, and manufacturing, Ion Park will make up a significant portion of that budget: $100 million of it, to be exact.

The $100 million Ford will spend on Ion Park is just a drop in the bucket for its planned EV expenditure. The company committed $30 billion into electrification by 2025, a relatively short-term plan that differs from the outlines that many other car companies have talked about for the coming years. Perhaps this is Ford’s biggest advantage. It could be why the company is arguably the most serious in terms of legacy car companies that have pledged toward a transition to sustainable powertrains.

Along with the Mach-E, Ford will roll out several new all-electric vehicles in the coming years. Earlier this year, it announced the F-150 Lightning, the all-electric take on America’s best-selling pickup truck. Additionally, Ford will venture into the commercial electric vehicle market with the 2022 E-Transit van, which could benefit from the advancements in cell technology that Ford plans to make at the new Ion Park facility.