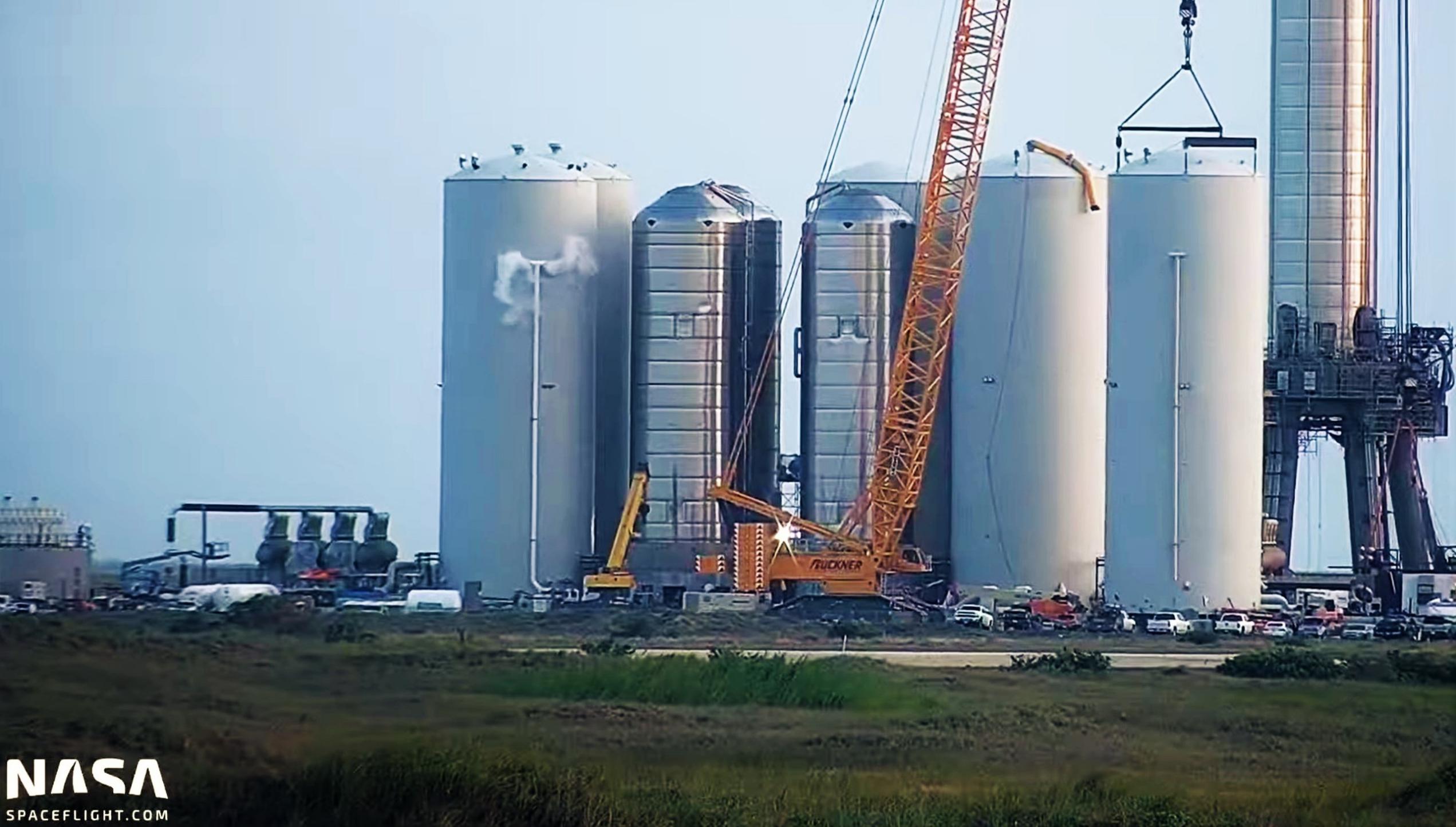 SpaceX's orbital Starship tank farm has begun venting for the first time in a sign that testing of the storage vessels has finally begun. (NASASpaceflight)

Update: Two days after a bevy of tanker trucks began to arrive at SpaceX’s orbital Starship launch site with load upon load of cryogenic liquid nitrogen, the company’s custom-built tank farm appears to have taken its very first ‘breaths.’

In other words, at least one of seven massive propellant storage tanks – two of which appear to have been fully completed and insulated – began venting. For a tank like SpaceX’s ground support equipment (GSE) tanks, the level of venting observed can only mean one thing: pressure maintenance during operations with cryogenic fluids. As cryofluids are loaded into empty tanks, they inevitably come into contact with warm pipes and tank walls, rapidly warming a portion of the liquid that then boils into gas. Tanks then need to vent that excess gas to avoid bursting.

In the case of SpaceX’s two completed liquid oxygen GSE tanks and a spate of liquid nitrogen (LN2) deliveries this week, it’s clear that the company has begun the process of testing and activating part of its brand new orbital-class Starship tank farm – beginning with much less risky LN2 proof testing. Filling the two finished LOx tanks with LN2 should also serve the dual purpose of flushing and cleaning them of any debris or contaminants, ensuring that it’s safe to fill them with LOx when the time comes.

For the first time, SpaceX appears to have begun delivering large quantities of cryogenic fluids to Starship’s orbital launch pad – still under construction but fast approaching some level of initial operational capability.

Sometime in the morning on September 19th, a semi-truck carrying a cryogenic liquid nitrogen (LN2) transport trailer arrived at SpaceX’s Starbase launch facilities. Normally, that would be a completely mundane, uninteresting event: SpaceX has used and will continue to use liquid nitrogen to safely proof test Starship prototypes and supercool their liquid methane (LCH4) and oxygen (LOx) propellant for the indefinite future. However, up to now, 100% of all Starbase cryogen deliveries have gone to the suborbital launch site, where two “mounts” and a few concrete aprons have supported all Starship and Super Heavy tests and launches to date.

Instead, this particular LN2 tanker headed for Starbase’s first orbital tank farm and began to offload its cryogenic liquid cargo at a number of brand new fill stations specifically designed for the task.

Still well under construction and at least a few weeks or months from total complete, Starship’s orbital launch site tank farm will ultimately be a group of eight massive storage tanks surrounded by thousands of feet of insulated plumbing, industrial pumps, a small army of “cryocoolers,” a blockhouse filled with human-sized valves, and much more. Said tank farm has been under construction for the better part of 2021, beginning with work on its concrete foundation this January.

Nine months later, the orbital tank farm is nearly complete. A power distribution and communications blockhouse has been complete for weeks with virtually all the wiring and cabling needed for the orbital launch mount and tower already in place. Several hundred feet of concrete cable and plumbing conduit have been filled with thousands of feet of wires, cables, and pipes and been sealed and buried. The tank farm blockhouse – where a dozen or so massive valves control the flow of propellant to and from the orbital launch mount and tower – is complete save for some final plumbing.

Finally, seven of eight GSE (ground support equipment) tanks have been installed and partially plumbed. Built in the same factory, six are virtually identical to Starship and Super Heavy tanks and will store LOx (3x), LN2 (2x), LCH4 (2x), and around a million gallons of water. Save for one LCH4 tank, all have been installed at the farm and that last tank (known as GSE8) is nearly complete back at the build site. Additionally, to insulate those seven thin, steel storage tanks, SpaceX has contracted with a water/storage tank company to build seven “cryoshells” and said million-gallon water tank.

The water tank was installed months ago and all seven shells are completed and ready to go as of last month. Only two of those seven cryoshells have been installed – and, rather asymmetrically, both on LOx tanks. SpaceX recently rolled the first LN2 tank cryoshell to the farm and could install it soon but as of now, it will likely be weeks before the orbital tank farm will have sleeved, insulated LOx, LN2, and LCH4 tanks ready for testing.

At the moment, that’s one of the biggest points of uncertainty standing between SpaceX and the ability to test Super Heavy or Starship at the orbital launch site. It’s entirely unclear if uninsulated GSE tanks can support any kind of substantial testing – like, say, the first full Super Heavy static fire test campaign – before their contents effectively boil off. As such, it’s a bit of mystery why SpaceX then had at least three tanker loads of liquid nitrogen – likely more than 70 tons (~150,000 lb) total – delivered to the orbital tank farm on September 19th.

By all appearances the first time that the farm’s actual main tanks have been filled with anything, that liquid nitrogen seems to have been loaded into one or both of the two insulated LOx tanks. There are two or three main explanations. First, SpaceX could simply be testing those more or less completed tanks with their first cryogenic fluids. Those partial ‘cryo proof’ tests would also help clean and flush out the interior of the LOx tanks, removing mundane debris or contamination that could become a major hazard when submerged in a high-density oxidizer. Given that both tanks can easily hold ~1300 tons (~2.9M lb) of liquid nitrogen, 70 tons is more of a tickle than a test, though, so a magnitude more would need to be delivered to perform even a half-decent bare-minimum cryoproof.

The other distinct possibility is that SpaceX plans to temporarily use one or both of the only two finished orbital pad tanks to store liquid nitrogen for Super Heavy Booster 4’s first cryogenic proof test. Either way, SpaceX has test windows scheduled every day this week, beginning with a six-hour window that opens at 5pm CDT today (Sept 20). Stay tuned to find out what exactly SpaceX plans to test and if the orbital tank farm and its first taste of liquid nitrogen are involved!