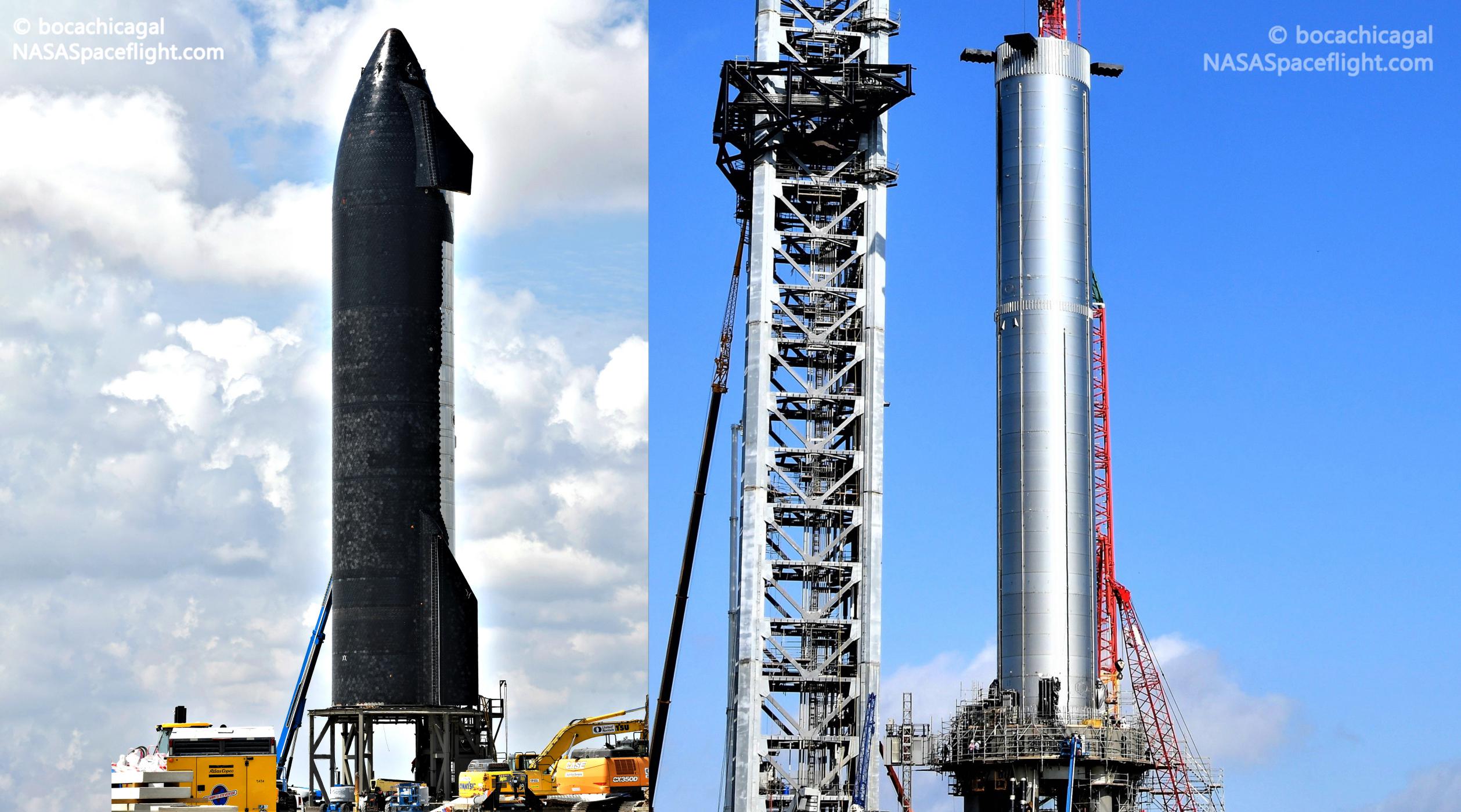 SpaceX has scheduled a full week with as many as 30 hours of road and beach closures for Starship and Super Heavy testing and is working hard to prepare the first orbital-class ship and booster for several major challenges.

First rolled to SpaceX’s Starbase orbital launch site more than six weeks ago and stacked together for the first time on August 6th, the company has spent the last month putting the finishing touches on Starship 20 (S20) and Super Heavy Booster 4 (B4) – ranging from heat shield installation to plumbing and wiring. Perhaps most importantly, SpaceX has also installed some or all of the Raptor engines that are expected to support the ship and boosters’ first static fire qualification tests.

For a number of reasons, those static fires – and a few additional tests expected to precede them – could be huge milestones for SpaceX’s Starship program.

Earlier this month, after rolling Starship S20 to the launch pad for the second time and installing it on one of two suborbital launch/test mounts, SpaceX began the process of installing Raptor engines (again for the second time) on the rocket. Beginning with two center sea level-optimized Raptors, SpaceX then installed a Raptor Vacuum engine on Ship 20. The implication: when S20 fires up for the first time, it might be doing so with two kinds of Raptor engines – a first for the Starship program.

Since Raptor Vacuums first began static fire testing at SpaceX’s McGregor, Texas development campus around Q4 2020, the company has yet to fire up an RVac engine on a Starship prototype. Starship’s current design features three gimballing sea-level Raptors and three vacuum-optimized variants with much larger nozzles – all in close proximity inside a 9m-wide (30 ft) skirt.

As such, the first Starship static fire with any combination of Raptor Center and Raptor Vacuum engines will be a significant milestone for SpaceX. Eventually, that will likely culminate in the first static fire(s) of a Starship (likely S20) with all six Raptors installed – a test that will effectively qualify that prototype for its first orbital launch attempt.

Meanwhile, things are arguably even more complex for Super Heavy. Aside from a single three-engine static fire completed by Super Heavy Booster 3 (B3), Starship’s first stage has never come close to a full-up static fire with all 29-33 Raptor engines installed. Whenever that occurs, Super Heavy will likely become the most powerful rocket ever tested and – like with Starship – will be more or less qualified for its first flight if the test goes according to plan.

SpaceX already installed a full 29 Raptor engines on Super Heavy B4 last month. After returning to Starbase, those engines were removed and eventually reinstalled a few weeks later – albeit with a number of replacements. Now, having spent the last 11 days sitting on the orbital pad’s launch mount, SpaceX has begun to replace at least one of Booster 4’s 29 installed engines. It’s unclear why but the fact that SpaceX is replacing engines at the launch pad – instead of rolling Super Heavy back to the build site for the third time – is an encouraging sign that B4 is nearly ready for its first proof and static fire tests.

Due to all the recent activity, it’s almost impossible to tell whether Starship S20 or Super Heavy B4 will be first onto the figurative saddle for ambient pressure, cryogenic, and static fire proof testing. What is clear, though, is that SpaceX has five six-hour testing windows scheduled every day next week. Stay tuned for updates on the next steps for SpaceX’s first orbital-class ship and booster pair.