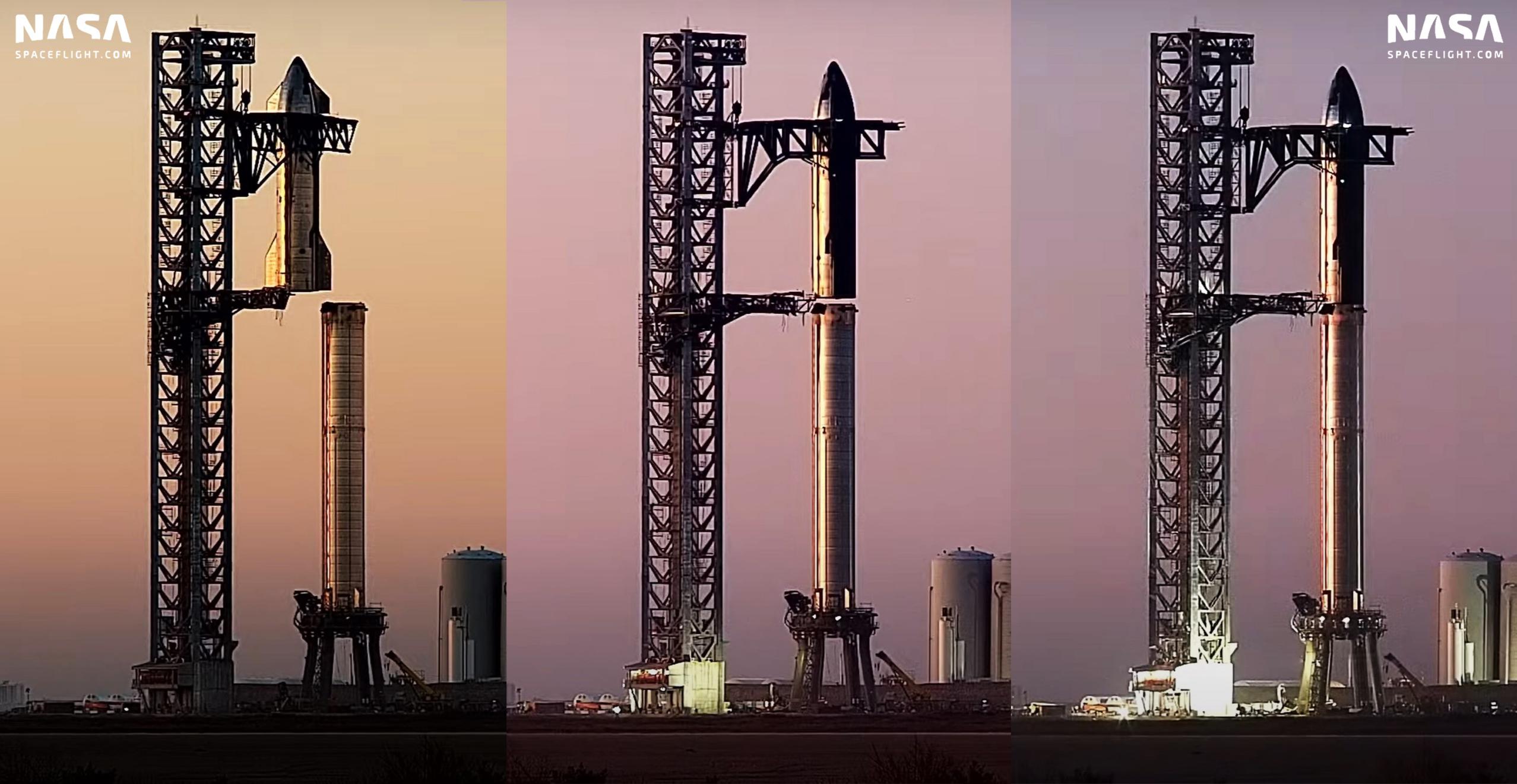 For the second time ever, SpaceX has used Starbase’s ‘Mechazilla’ tower and arms to stack a Starship upper stage on top of a Super Heavy booster.

This time around, though, SpaceX clearly learned a great deal from its second February 9th Starship stack and was able to complete the stacking process several times faster on March 15th. During the second attempt, depending on how one measures it, it took SpaceX around three and a half hours from the start of the lift to Starship fully resting on Super Heavy. With Stack #3, however, SpaceX was able to lift, translate, lower, and attach Starship to Super Heavy in just over an hour.

Oddly, SpaceX managed that feat without a claw-like device meant to grab and stabilize Super Heavy during stacking operations. For Stack #2, all three arms were fully in play. First, a pair of ‘chopsticks’ – giant arms meant to grab, lift, and even recover Starships and boosters – grabbed Ship 20, lifted it close to 100 meters (~300 ft) above the ground, rotated it over top of Super Heavy, and briefly paused. A third arm – known as the ship quick-disconnect or umbilical arm – swung in and extended its ‘claw’ to grab onto hardpoints located near the top of Super Heavy. Once the booster was secured, the ‘chopsticks’ slowly lowered Ship 20 onto Booster 4’s interstage and six clamps joined the two stages together.

A few hours after the two were clamped together, an umbilical device located on the swing arm extended and connected to Ship 20. It’s unclear if the panel was actually used in any way but the umbilical is designed to connect Starship to ground systems to supply propellant, power, communications, and other consumables. Regardless, the device did appear to connect to Starship. Prior to Stack #3, however, SpaceX removed both of the swing arm’s ‘claws,’ meaning that it had no way to grab onto Super Heavy. That diminished capability clearly appeared to have zero impact on the ease or speed of the stacking process given that it was completed a full three times faster than Stack #2.

That could imply that the claw is either completely unnecessary or only needed when attempting stacking operations in extreme winds. What is clear is that the claw removal likely only shaved a handful of minutes off of the full stacking process. What really saved time on Stack #3 was a faster lift and fewer pauses throughout – especially while lowering Starship the last several meters onto Super Heavy. During Stack #2, SpaceX took close to an hour and a half to fully lower Ship 20. The same sequence took just ~20 minutes during Stack #3.

Still, after the impressively rapid one-hour stack, it then took SpaceX close to two hours to connect the swing arm’s umbilical to Starship, leaving plenty of room for improvement. Ultimately, assuming SpaceX can speed up the start of the stacking process and replicate its Starship success with Super Heavy, which will also need to be grabbed and installed on an even more complex launch mount, it’s possible that Starbase’s orbital launch integration system is already capable of supporting multiple Starship launches per day. Of course, SpaceX has yet to demonstrate that the orbital launch site can be turned around in a matter of hours after being subjected to the violence and stresses of a Starship launch.

More significantly, SpaceX has never even attempted an orbital Starship launch, recovery, or reuse. That leaves the company in the unusual position of building and testing expensive, specialized support equipment before it actually knows that the rocket that equipment is designed to support is in any way capable of taking advantage of it. For an orbital spacecraft the size of Starship, only the Space Shuttle comes anywhere close and NASA’s all-time record for orbiter turnaround was 54 days. SpaceX has technically flown two Falcon 9 boosters twice in 27 days but no matter how impressive that feat is, reusing a far smaller suborbital booster is vastly easier than reusing a massive orbital spacecraft.

At the end of the day, it’s not really SpaceX’s fault that it’s still waiting for permission to attempt orbital test flights. Nonetheless, the growing gap in maturity between Starship and Super Heavy and the orbital launch site designed to support them continuously raises the risk that SpaceX will have to extensively redesign the rocket, its support equipment, or both if significant problems arise during orbital test flights.

Up next, there’s a chance that SpaceX could attempt to cryoproof Starship while on top of Super Heavy – or perhaps both stages at once. While SpaceX has performed more than half a dozen cryoproofs of Ship 20 and Booster 4 using the orbital launch site’s propellant storage and distribution system, it hasn’t fully tested the hardware needed to route hundreds of tons of propellant hundreds of feet into the air – essential for full-stack testing and launch operations.