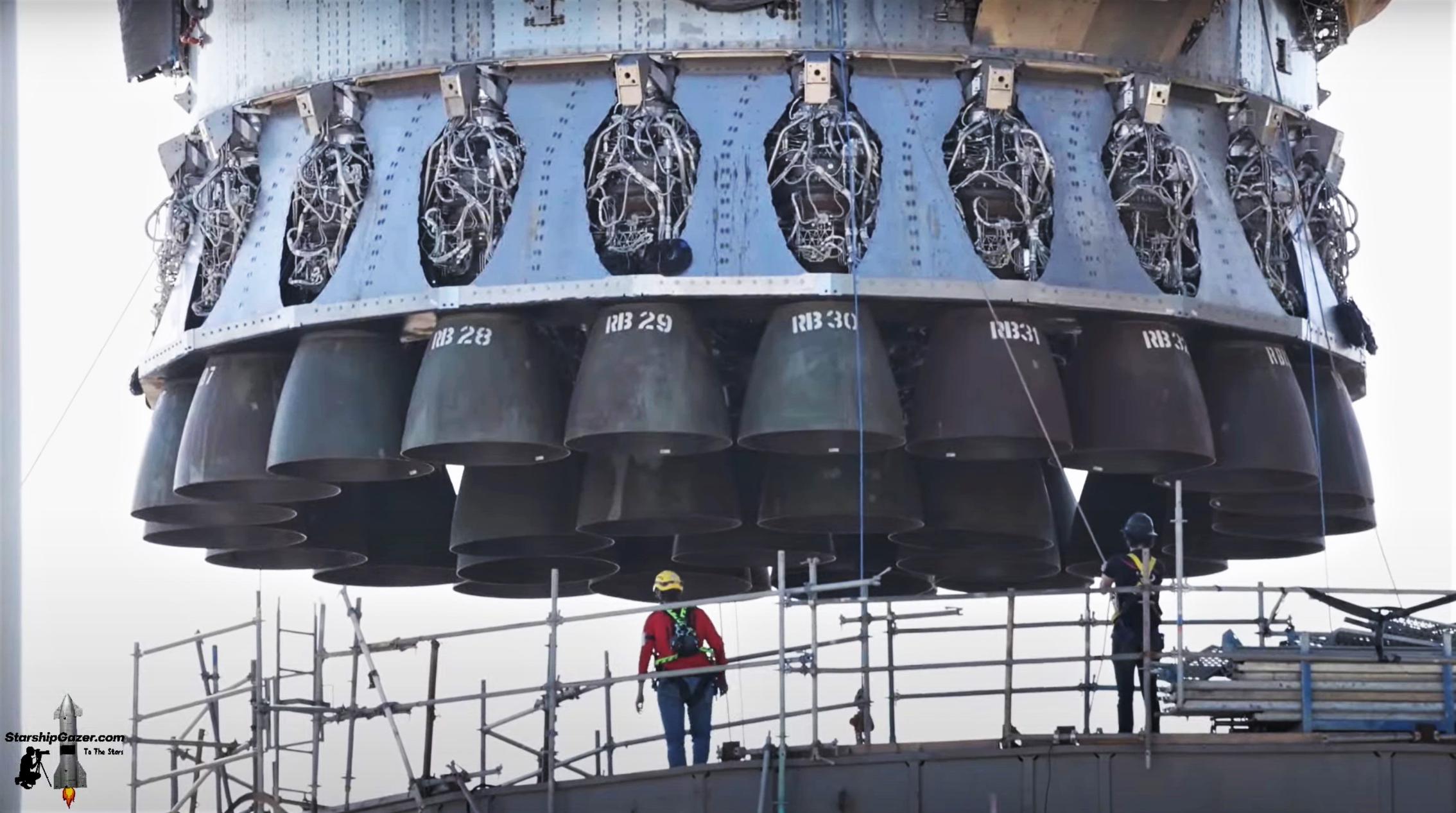 After several signs of imminent activity on Sunday, SpaceX has installed Super Heavy Booster 4 (B4) on Starbase’s lone ‘orbital launch mount’ for the third time.

Around 10am CST (UTC-6), SpaceX began retracting more than a dozen clamps that hold the 69m (~225 ft) tall Super Heavy – the largest booster ever built – to its transport and work stand. By 11:30am, Booster 4 was safely extracted from the stand and hovering above it as the lift team crossed their Ts and dotted their Is before proceeding. SpaceX’s newest Starbase crane then spun around and crawled a short distance to the orbital launch mount, where it lifted Booster 4 above the mount.

In a process that this particular Super Heavy prototype is thoroughly familiar with, SpaceX then very carefully lowered B4 down into the center of the donut-shaped orbital launch mount, where 20 separate clamps – each capable of deploying and retracting – form a support ring and giant hold-down clamp.

It’s unclear how exactly that process of mount installation works but it could be quite the orchestration. By all appearances, Super Heavy hold-down clamps – mechanical devices designed to hold the booster to its work stand or keep it immobile on the launch mount during a variety of test – work by reaching inside the lip of the booster’s aft ‘skirt,’ which sports a very sturdy ring of steel that 20 Raptor Boost engines mount to and push against. The 20 clamps fit precisely between each of those 20 outer Raptors and grab onto Super Heavy from the inside.

Just before liftoff, all 20 hold-down clamps will rapidly retract back into the orbital launch mount. So will another 20 small quick-disconnect umbilical panels designed to supply every single Raptor Boost engine with the gases they need to ignite. The primary booster quick-disconnect – which connects Super Heavy to power, communications, and propellant supplies – will also retract into a hooded enclosure at some point during the process. Finally, a giant, swinging arm located about halfway up Starbase’s ‘launch tower’ will retract a similar quick-disconnect panel for Starship fueling, retract two claw-like support arms, and swing back for liftoff.

Altogether, while there are likely even more than just those described above, a single Starship launch will require at least 44 separate devices to successful actuate in rapid and precise succession – 41 for Super Heavy and at least 3 for Starship. That incredible complexity – probably making Starship’s the most mechanically complex launch mount in the history of rocketry – may partially explain why Super Heavy Booster 4 has yet to even attempt a single proof test more than four months after it first left the high bay it was built in.

Without a functioning orbital launch mount, it hasn’t been possible to fully test a Super Heavy booster. With any luck, on their third rendezvous, both Booster 4 and the orbital launch mount are finally close enough to completion to perform some serious testing. At the absolute minimum, everything appears to be in order for SpaceX to properly connect Super Heavy to the launch mount and pad for the first time – the process of which is already underway. Aside from connecting B4 to the mount’s hold-down clamps, which has been done twice before, SpaceX can now attach all 20 Raptor quick-disconnects and the main booster quick-disconnect to a Super Heavy for the first time. Further up the tower, SpaceX can also partially test out the Starship quick-disconnect arm, which is half-designed to grab onto and stabilize Super Heavy.

SpaceX currently has road closures (signifying plans for ship, booster, or pad testing) scheduled on Tuesday through Friday this week, hinting at the possibility that Super Heavy B4 could finally start proof testing in mid-December.