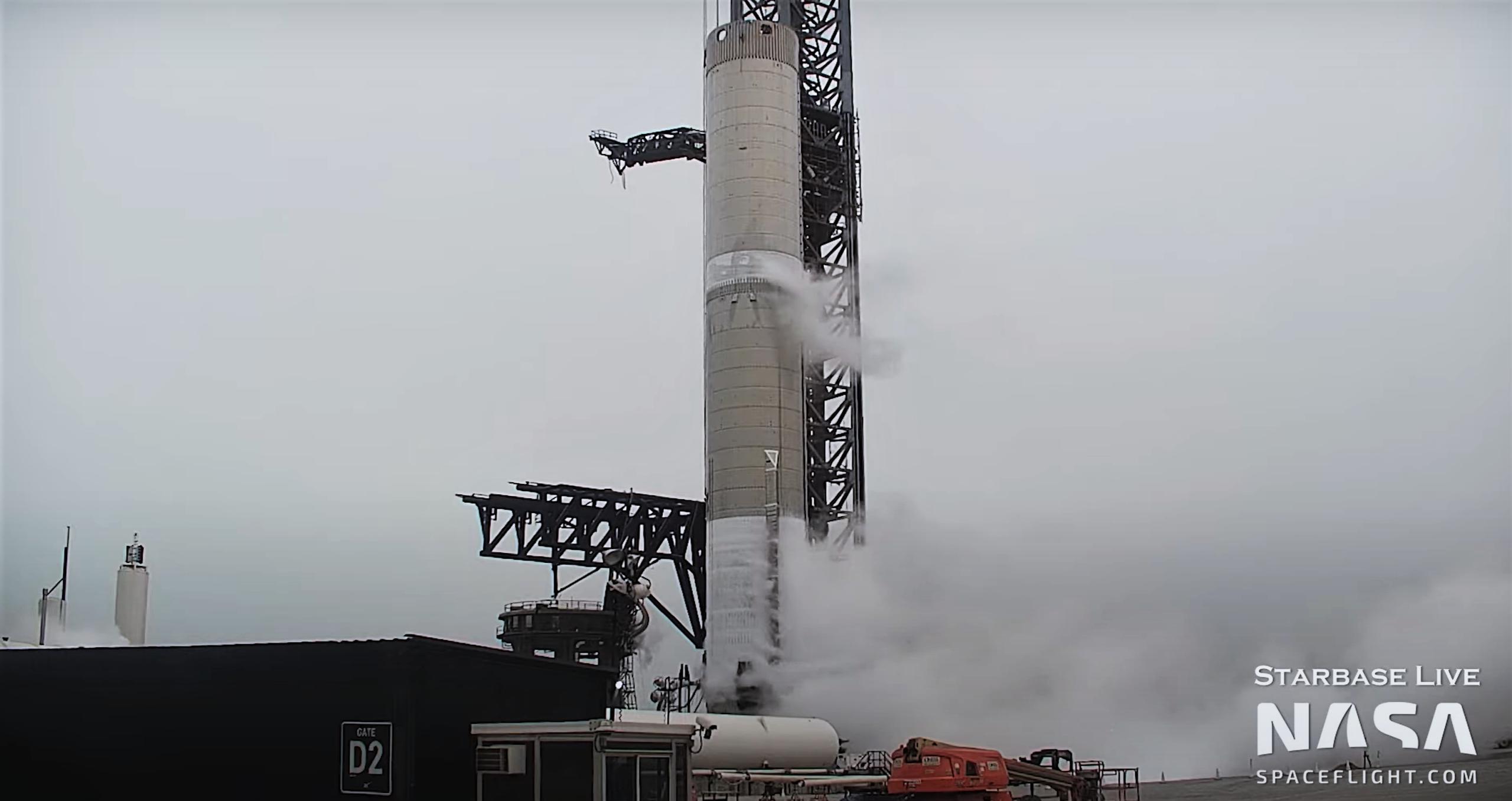 Super Heavy Booster 7 appears to have made it through its first day of structural testing. (NASASpaceflight)

In a what is likely a prelude to engine installation, SpaceX has begun stress-testing an upgraded Super Heavy booster prototype.

Known as Super Heavy Booster 7 or B7, the prototype is the first of its kind designed to support up to 33 new Raptor V2 engines – each potentially capable of producing up to 230 tons (~510,000 lbf) of thrust at liftoff. Even with just 20 such engines installed, Super Heavy – measuring around 69 meters (~225 ft) tall and nine meters (~30 ft) wide – will be the largest and most powerful rocket stage ever tested. That potentially unprecedented power is why SpaceX has custom-built a complex structural test stand to explore Super Heavy’s true performance envelope in a slightly less risky manner.

In the second half of 2021, that structural test stand briefly tested an unusual half-Starship, half-Super Heavy test tank with a nine-engine thrust section (‘puck’) and later compressed a different test tank until its reinforced steel skin buckled. In the interim, SpaceX removed its nine-ram setup and modified the stand to support 13 rams, guaranteeing that its new purpose was to test Super Heavy’s new 13-engine thrust section. Prior to Booster 7, all Super Heavy prototypes have had a similar nine-engine puck and an outer ring of 20 engines that would attach directly to the rim of each booster’s cylindrical body.

Increasing the central engine count from 9 to 13 was already certain to up the amount of stress future Super Heavy thrust pucks would need to survive by almost 45%. But combined with Raptor V2’s thrust increases, Super Heavy Booster 7’s thrust puck could actually be subjected to at least 80% more thrust at liftoff. Altogether, Super Heavy B7’s 33 engines should be able to produce ~7600 tons (~16.8M lbf) of thrust compared to Super Heavy B4’s ~5400 tons (~11.9M lbf). As a result, though it’s odd that SpaceX never did significantly test Booster 4, it’s no surprise that the company chose to give Booster 7 priority as soon it was ready.

After a few false starts and at least one ‘pneumatic proof test’ that likely saw Booster 7 pressurized with benign nitrogen gas, SpaceX began stress-testing the upgraded Super Heavy in earnest on April 14th. First, the booster was filled about a third of the way with roughly 1000 tons (~2.2M lb) of liquid nitrogen (LN2) or a combination of liquid oxygen (LOx) and LN2. Once the rocket was fully chilled, there were clear signs of some kind of added stress as large sheets of ice that had formed on the side of B7’s skin broke apart and fell off.

Only ice close to Super Heavy’s base was visibly disturbed, increasing the odds that the behavior was a sign of some or all of the structural test stand’s hydraulic rams simulating Raptor engines. It’s also possible that the stress was caused by pressurizing Super Heavy’s tanks to the point that they began to appreciably deform, though that type of testing is far harder to differentiate. Without official comments, it’s unfortunately impossible to ever know what exactly SpaceX is testing or how successful those tests are when the structural test stand is involved.

Nonetheless, it’s likely that Booster 7 isn’t done with the stand just yet. SpaceX could benefit from just about any data gathered about the performance of Super Heavy’s new thrust puck during simulated Raptor startup, throttling, and shutdown both at liftoff and during boostback and landing burns. SpaceX might also want to simulate engine-out scenarios that would result in asymmetric thrust.

Assuming Booster 7 survives this particular series of tests and SpaceX is happy with its performance on the structural test stand, the upgraded Super Heavy could be ready for Raptor installation and integrated wet dress rehearsal and static fire testing in the near future. SpaceX began delivering upgraded Raptors V2 engines to Starbase in late March.