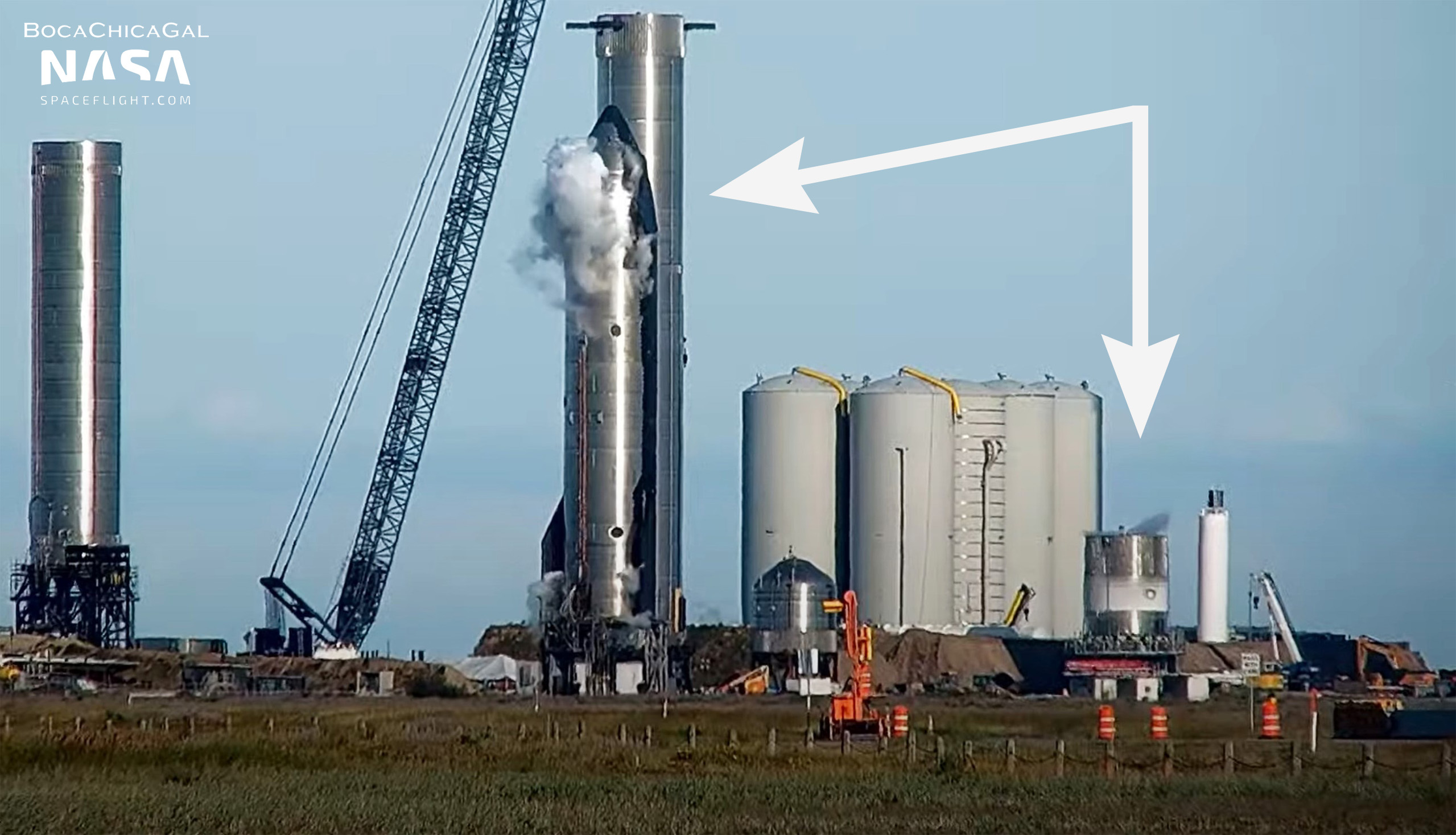 After another few weeks of downtime, SpaceX has simultaneously tested the first orbital-class Starship prototype and a Frankenstein-esque ‘test tank’ at its South Texas facilities. While nothing that occurred was all that visually spectacular, the afternoon of testing was still noteworthy for a couple of reasons.

First up, following a successful six-engine Raptor static fire – the first in Starbase history – on November 12th, all signs pointed to Starship S20 attempting another static fire (its fourth) on December 1st. In the almost three weeks of inactivity between those planned tests, SpaceX likely performed extensive inspections of the pathfinder prototype and its Raptor engines. Technicians also repaired the minor heat shield damage and tile loss that testing incurred and patched a few other ‘holes’, effectively leaving Ship 20 with the first fully finished heat shield by the end of November.

Earlier this week, one of the few remaining Boca Chica Village residents received a safety notice from SpaceX indicating that a static fire test was scheduled on Wednesday, December 1st – followed soon after by a notice to mariners (NOTAM) warning boaters to keep to a safe distance. Two hours into the 10am to 6pm CST test window, Starship S20 was already venting and starting to get frosty, confirming that propellant loading had begun. A little over an hour later, it was clear that SpaceX had aborted the first static fire attempt of the day. For the next three hours, Ship 20 exhibited some unusual behavior including new vents, an apparent header tank pressurization or fill test, and still more odd venting in new places.

In the middle of Starship’s weird nose-related testing, SpaceX began simultaneously loading a new ‘test tank’ known as B2.1 with liquid nitrogen (LN2) – marking the first truly simultaneous test of multiple Starship test articles. As Ship 20 seemingly detanked for the second time that day, the B2.1 tank was fully loaded with LN2 and apparently pressure-tested not long after. A few hours later, the test tank was also detanked and the road to the pad was reopened, marking the end of the day’s testing.

Normally, nothing is particularly unusual or noteworthy about test tank testing. Since January 2020, SpaceX has routinely built and tested tanks that are effectively just shorter versions of actual tanks and hardware, using them to qualify changes to Starship’s design, materials, operations, and more before applying those changes to full-size prototypes. B2.1 is the tenth dedicated test tank to reach the launch pad in a little under two years.

Normally, the ‘B2.1’ name SpaceX has given the tank would imply that it’s a newer booster test tank (using Bx instead of BNx) following in the footsteps of BN2.1, which passed cryogenic and load testing this summer. Instead, though, B2.1 is a bit of a nightmarish amalgamation of seemingly random Starship and Super Heavy parts. Its forward dome is an old, unused booster section complete with the hexagonal structure grid fins would have been brace against. Its aft section is a booster thrust structure. Up to that point, it’s effectively just a copy of BN2.1.

However, SpaceX inexplicably installed a Starship thrust dome inside B2.1’s booster thrust structure, creating a test tank with no obvious relevance to any conceivable Starship or Super Heavy design or prototype. Further, SpaceX rolled B2.1 to the launch site for testing only after installing it on an unused device that’s believed to be the aft half of a dedicated booster structural test stand. In theory, a sort of ‘cap’ would be fitted on top of a booster or test tank installed in the stand’s base and strong cables would connect the two, allowing SpaceX to subject prototypes to compressive stress – like, perhaps, the forces a booster might experience while carrying a fully-fueled 1300-ton Starship to space. The upper half of that test structure has yet to be moved to the launch site.

Altogether, the weird half-complete test stand and bizarre fusion of ship and booster parts make B2.1’s purpose and initial testing a complete mystery. It’s unclear what value it provides that makes it more of a priority than, say, finally starting to test the first flightworthy Super Heavy booster (B4). Ultimately, the most interesting thing about B2.1’s test debut is the fact that it appears to mark the first use of Starbase’s brand new orbital tank farm, which is approaching completion.