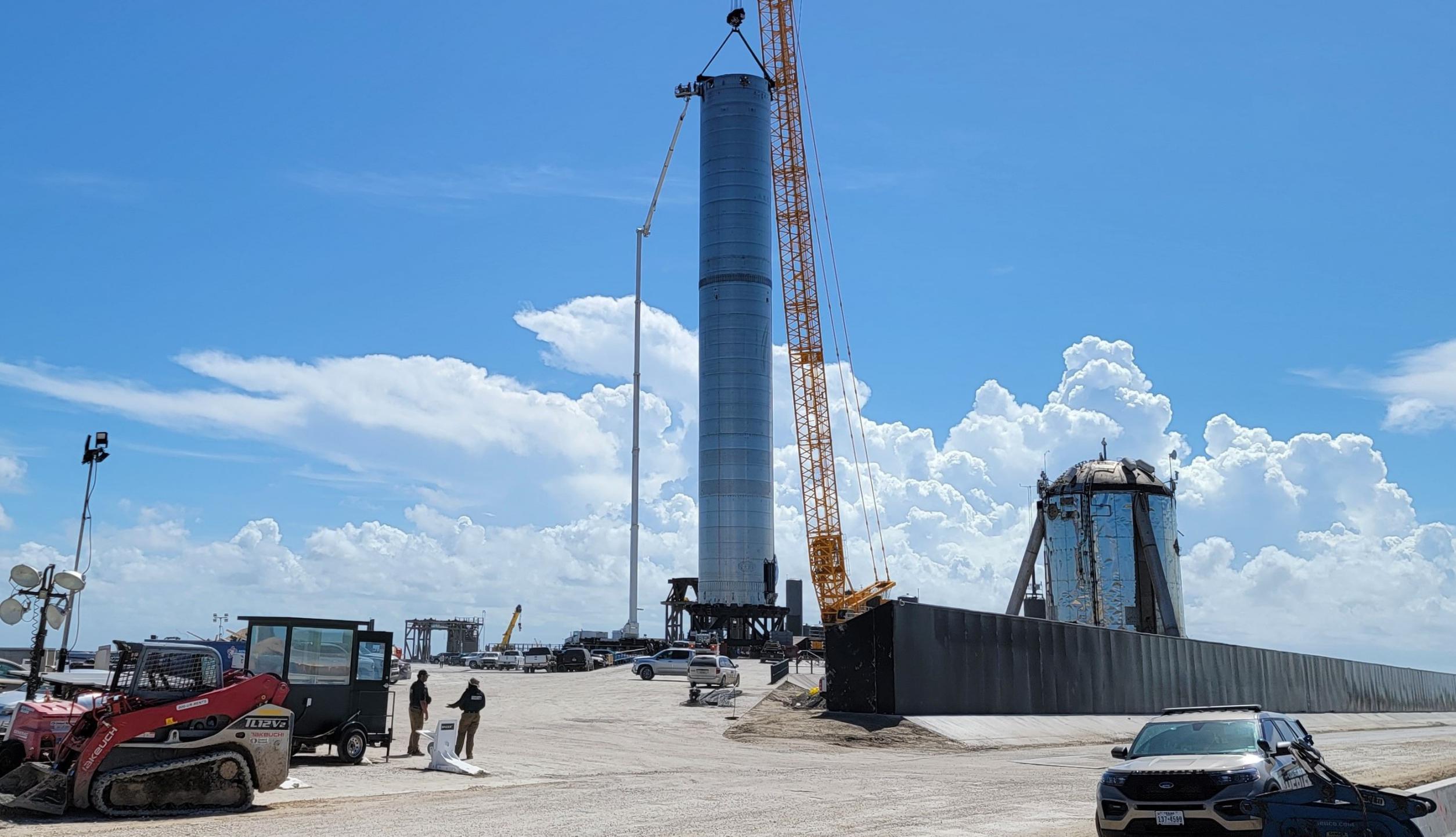 Six weeks after assembly began, SpaceX has completed Starship’s first true Super Heavy booster prototype, rolled it out of its ‘high bay’ nest, and installed the building-sized rocket at the launch pad.

Standing some 65 meters (~215 ft) tall, Super Heavy Booster 3 (B3) is the same height as an entire two-stage Falcon rocket and Dragon spacecraft and is expected to singlehandedly weigh six times more than a fully-fueled Falcon 9 when loaded with liquid oxygen and methane propellant. Once Super Heavies are eventually outfitted with a full 32 Raptors, more engines than any other rocket in history, the booster will also produce more than twice the thrust of NASA’s Saturn V Moon rocket – still the most powerful vehicle ever successfully flown.

Assembled out of 36 steel rings, three tank domes, and dozens of other major components, Super Heavy B3 borrows heavily from the Starship production apparatus SpaceX has built and refined over the last ~18 months. Boosters use the same welding and integration jigs, facilities, and strategies and are built out of the same steel rings, stringers, stiffeners, and dome ‘gores.’

In some ways, Super Heavy boosters are actually a good deal simpler than Starships, which require a custom nose cone, secondary ‘header’ tanks, extra plumbing, actuating flaps, a heat shield with thousands of tiles, and more. Boosters, by comparison, require no heat shield and only need two main tanks made out of identical steel rings. However, all three Super Heavy domes (forward, common, and thrust) are mostly custom or require major modifications on top of parts shared with Starship domes.

Speaking on June 30th, Elon Musk revealed that Booster 3 was “very hard to build” and would be exclusively used for ground tests, reiterating that Super Heavy B4 is currently the first booster scheduled to fly. Curiously, the SpaceX CEO also said that “much of [Super Heavy’s] design” would be changed between Booster 3 and Booster 4, raising questions about what the company hopes to gain from Booster 3 “ground tests.”

Regardless, those tests are now on track to begin as early as Monday, July 6th after SpaceX transported Super Heavy Booster 3 from the factory to the launch pad and rapidly installed the rocket on a test platform on July 1st. Following in the footsteps of Starship, Super Heavy’s first hurdle will likely be an ambient proof test, in which nitrogen gas is used to check for leaks and verify general structural integrity under pressure.

Once complete, Booster 3 will be put through a cryogenic proof test, effectively replacing gaseous nitrogen with its supercooled liquid equivalent to simulate the immense thermal and mechanical stress incurred by similarly cold liquid oxygen and methane propellant. How exactly that test will be done is unclear given that Super Heavy can feasibly hold more than 3100 tons of liquid nitrogen and nowhere near that much storage capacity has been installed. The most important goal of cryo proof testing is to demonstrate that Super Heavy is structurally sound with its tanks pressurized to nominal flight pressures – likely at least 7-8 bar (~100-120 psi).

If successful, there are two possible routes SpaceX could go: more cryogenic proof testing at higher (and thus potentially destructive) pressures or static fire testing with one or several Raptor engines installed. Given Musk’s statement that the first flightworthy Super Heavy booster would implement major design changes, it’s unclear if Booster 3 is of a high enough fidelity to warrant static fire testing or if SpaceX has effectively turned the Super Heavy prototype into a massive ‘test tank’ instead.