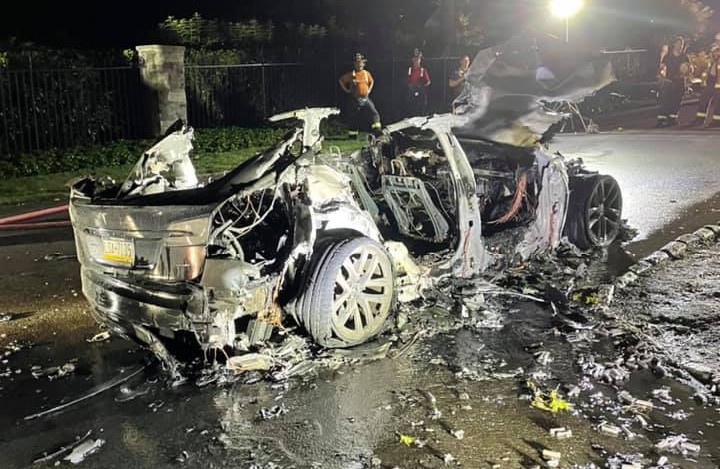 Accounts of the Model S Plaid fire have been shared by an EMT that reportedly responded to the incident, the chief fire officer for the Lower Merion Township Fire Department in Pennsylvania, and the lawyers representing the Model S Plaid owner.

With this in mind, it is pertinent to provide a view of what each party has stated about the incident so far. Going through each statement would potentially make it a lot easier to come up with a legitimate narrative in the future, especially as official investigations into the fire conclude. That being said, here are the accounts that have been shared on the Tesla Model S Plaid fire earlier this week.

The Tesla Model S Plaid caught fire in Haverford, Pennsylvania on June 29, 2021. The vehicle, which was a Plaid variant based on the remains of its rear badge, was engulfed in flames when fire crews arrived. A Facebook post from the Gladwyne Volunteer Fire Company indicated that two fire engines were deployed for the incident. Firefighters were at the scene for about three hours, though the vehicle was cooled down for almost 90 minutes to ensure that the batteries were safe.

“Engine 24 with a crew of 7 arrived on scene simultaneously with Engine 25. Due to prior training classes on Tesla Vehicle Fire emergencies, Engine 24 laid a 5 inch supply line into the scene so that we could keep a continual water stream on the fire to extinguish the fire and cool the batteries down to ensure complete extinguishment. Engine 24 and Engine 25 both deployed hand lines to extinguish the fire, each maintained a dedicated water source and continued to cool the vehicle down for almost 90 minutes. Firefighters were on scene for just over 3 hours dealing with this emergency. Nobody was hurt in the incident, and both crews worked hard in the high heat/humidity to mitigate the incident,” the Gladwyne Volunteer Fire Company wrote.

Interestingly enough, this statement, as well as the Gladwyne Volunteer Fire Company’s Facebook post about the Model S Plaid fire has been taken offline. A look at the fire department’s Facebook page and its official website would reveal that the post about the Tesla fire has now been deleted.

As the story of the Model S Plaid fire gained ground, the incident started to attract a lot of attention on social media as well. On Reddit, u/wilyson, who claimed to be an EMT who responded to the fire, noted that the report they received about the incident was downright strange. According to the EMT, the person who reported the fire stated that the car was driving uphill without an occupant while it was ablaze. The owner was reportedly nowhere to be found. This was a rather dramatic image, and it promptly fueled speculations among the anti-EV crowd about “self-driving” cars catching fire.

Quite understandably, the EMT noted that he could not provide many details as the police are not releasing more information yet. That being said, the EMT later noted that car fires are very common and that electric vehicles are actually incredibly safe.

As noted in a CNBC report, chief fire officer for the Lower Merion Township Fire Department in Pennsylvania Charles McGarvey stated that the Tesla Model S caught fire on Tuesday while the driver was still at the wheel of the vehicle. According to the fire chief, firefighters eventually removed the Model S Plaid to a complex to safely store it overnight. The vehicle’s owner had since taken the remains of the vehicle from the facility, as per McGarvey, and will have the car investigated independently to determine the cause of the blaze.

The fire chief also stated that his teams had been in touch with Tesla and that some information about the incident should be made public soon. A National Highway Traffic Safety Administration spokesperson also noted that it was aware of the incident and that it is now in touch with relevant agencies and Tesla to gather more information about the fire. “If data or investigations show a defect or an inherent risk to safety exists, NHTSA will take action as appropriate to protect the public,” the NHTSA spokesperson said. The NTSB is not conducting an investigation to date.

The Model S Plaid owner’s lawyers, Mark Geragos of Geragos & Geragos in Los Angeles, and Jason Setchen of Athlete Defender in Miami, have since mobilized to share details about the incident as well. In a statement to CNBC, the attorneys stated that the Tesla owner initially noticed smoke coming from the back of the Model S Plaid. Following this, the owner reportedly tried to unlock and open the vehicle’s doors, but he ended up having to force his way out of the car as the locks seemed to malfunction. The lawyers noted that after the Tesla owner left his car, the Model S began to move on its own while flames engulfed it.

Geragos Global attorney Ben Meiselas later posted a tweet sharing an image of the burning Model S. As per the lawyer, “Our firm & @AthleteDefender represent an exec who purchased new Tesla Plaid Model S, which was 1/250 shipped. On Tuesday it spontaneously combusted. Our client was trapped & could have died. We tried reaching out to Tesla & have been ignored so far. This is car after escape.”

Overall, the Model S Plaid fire in PA features a number of interesting accounts that may not necessarily line up perfectly. The EMT that initially shared details about the incident mentioned that the Model S owner was nowhere to be found. The lawyers, on the other hand, shared an image reportedly taken immediately after the owner escaped, suggesting that the Tesla owner was on the scene of the blaze. As per the Model S Plaid’s Owner’s Manual, the vehicle is also equipped with a manual door release that should make it easy for occupants to vacate the car in case of an emergency. This seems to be a bit overlooked by the owner’s lawyers, who noted that their client was trapped inside the car.

Of course, the idea of a car driving on its own uphill while being engulfed in flames is quite strange, considering that neither Tesla’s Autopilot nor Full Self-Driving suite have such features. The only function that may have worked similarly is Smart Summon, but the vehicle was burning on a public street, an area where Smart Summon should have been unavailable.

We’ll definitely keep a pulse on this incident, as well as any details that may emerge as investigations go on, so do keep Teslarati on your radar as we follow developments in this event.