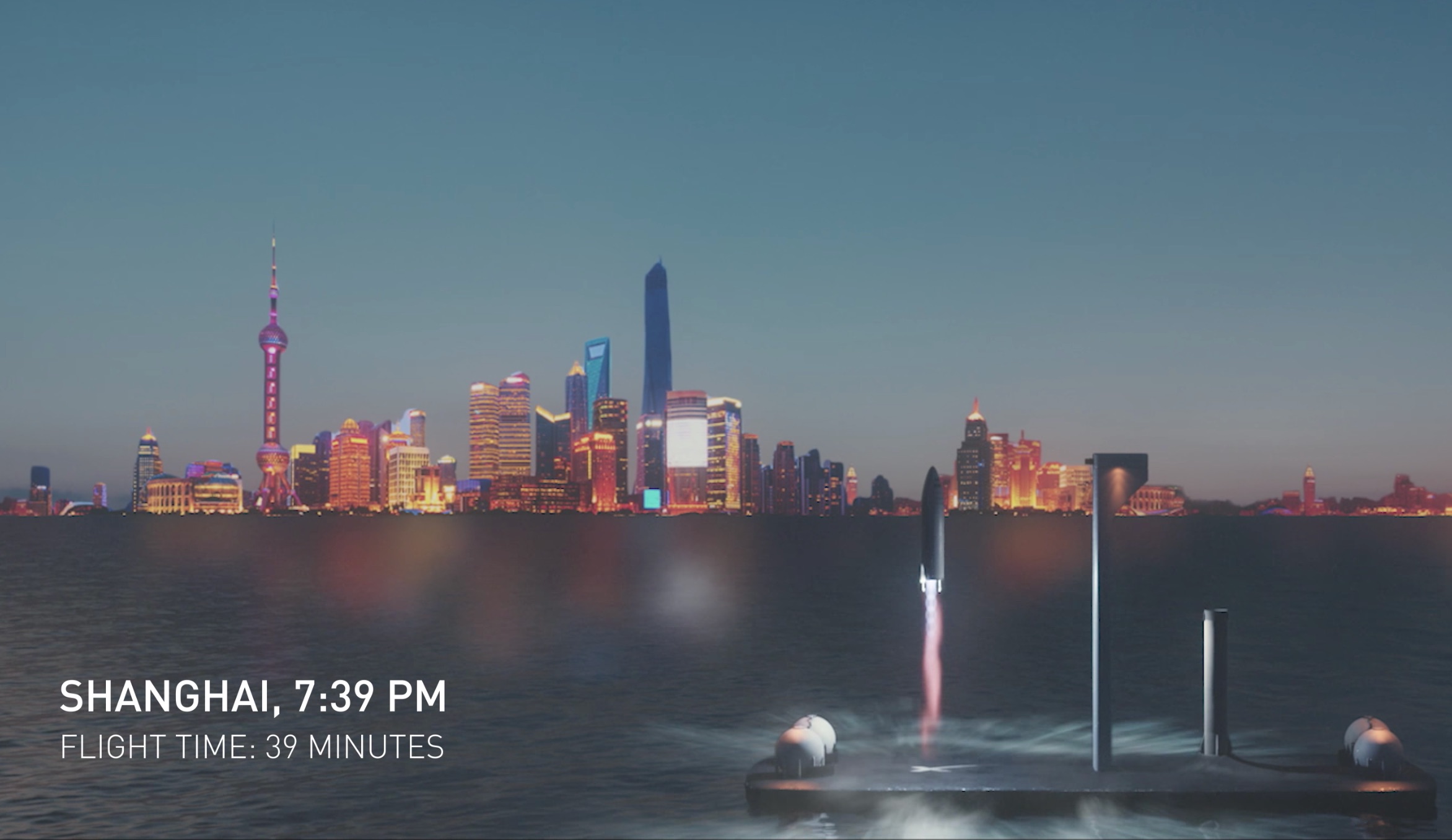 SpaceX’s BFR rocket to take people anywhere in the world in under 60 minutes, says Musk

Amid big reveals at IAC2017 about SpaceX’s future, CEO Elon Musk dropped a mammoth concept: City-to-city rocket travel that would transport people across the globe in under an hour.

The concept involves regular passengers using the multi-planetary transport system for the price of a regular airline ticket. Customers would board a Musk’s coined BFR (Big F****** Rocket) and lift off into space.

Passengers within the cabin would speed off  toward the destination city at 27,000 km/h (~18,000 mph). This concept would allow for a trip from New York City to Shanghai in roughly 40 minutes.

The concept, discussed at the end of Musk’s IAC2017 talk, was further detailed in a video released by SpaceX on Youtube.

“So most of what people consider to be long distance trips would be completed in less than half an hour,” Musk said in the presentation.

The video shows people getting on a boat and making their way out to a floating platform near New York City, boarding SpaceX’s rocket and then blasting toward Shanghai. While the concept video shows what type of rocket Musk plans to use as well as the recovery process, few other details have been released.

Information on passenger experience, travel regulations and the overall landing process are still lacking. Yet, the idea is certainly a revolutionary one if Musk can pull it off.

Musk did address how the human body would handle the trip in both the presentation and in the form of a tweet after the event.

Assuming max acceleration of 2 to 3 g's, but in a comfortable direction. Will feel like a mild to moderate amusement park ride on ascent and then smooth, peaceful & silent in zero gravity for most of the trip until landing.

Being that the rocket will be moving across the globe in space, SpaceX and passengers won’t have to worry about turbulence or weather.

“The great thing about going to space is there’s no friction, so once you’re out of the area it will be smooth as silk, no turbulence, nothing,” Musk said. “If we’re building this thing (BFR) to go to the moon and mars, why not go to other places as well?”

The city-to-city aspect of the BFR is an amazing concept, but it may be a while before an accurate timeline is released on how this technology would be constructed and implemented.

Would you fly in a SpaceX BFR for city-to-city transportation if given the opportunity? Vote!

I would board a SpaceX BFR rocket for city-to-city travel (assuming free) … https://t.co/1rjTP4rQ4j

SpaceX’s BFR rocket to take people anywhere in the world in under 60 minutes, says Musk